West Nile virus RNA was detected in brain tissue from a horse that died in June 2003 in Nuevo Leon State, Mexico. Nucleotide sequencing and phylogenetic analysis of the premembrane and envelope genes showed that the virus was most closely related to West Nile virus isolates from Texas in 2002.

West Nile virus (WNV), a mosquitoborne virus in the genus Flavivirus (family Flaviviridae), was first recognized in the Western Hemisphere during an outbreak in New York in 1999 (1). WNV rapidly disseminated across North America, and its geographic range now encompasses 47 of the 48 contiguous United States (2), 7 Canadian provinces (3), and several Mexican states (4–7).

More recently, Estrada-Franco et al. (5) reported the first isolation of WNV from Mexico. The isolate (TM171-03) was from a corvid that died on May 5, 2003, in Tabasco State, southern Mexico. We identified WNV RNA in the brain of a dead horse from Nuevo Leon State, northern Mexico. Nucleotide sequencing and phylogenetic analysis of the prM-E genes showed that this WNV from Mexico was most similar to isolates collected from noncoastal areas of Texas in 2002.

Cerebellar tissue was taken from a dead 12-year-old stallion from a privately owned ranch in the municipality of Juarez in Nuevo Leon State, Mexico, approximately 240 km south of the Texas border. The horse was first observed with neurologic symptoms on June 20, 2003, and it was euthanized 7 days later. The horse had never been outside the state of Nuevo Leon and had not been vaccinated against WNV. The tissue sample was immediately placed on dry ice and transported to the biosafety-level-3 facilities at Colorado State University for processing. Although we were unable to isolate virus from the sample by passing brain homogenate in Vero cells, we successfully amplified viral RNA.

Total RNA was extracted from approximately 100 μg of cerebellar tissue with Trizol reagent (Invitrogen, Carlsbad, CA), according to the manufacturer’s instructions. The prM-E genes were amplified as two fragments by reverse transcription–polymerase chain reaction (RT-PCR) by using primers designed from the nucleotide sequence of the prototype WN-NY99 strain (GenBank accession no. AF196835). PCR amplifications were performed by using Ex Taq DNA polymerase (Takara Biomedicals, Shiga, Japan), which has 3′→5′ exonuclease activity. Amplification products were separated by agarose gel electrophoresis, visualized with crystal violet, and extracted by using the rapid gel extraction system (Invitrogen, Carlsbad, CA). The resulting DNA fragments were reamplified by PCR because of the low RNA copy number in the original material and purified by using the QIAquick PCR purification kit (Qiagen, Valencia, CA). Purified DNAs were sequenced on both strands with an ABI 377 DNA sequencer (Davis Sequencing, Davis, CA) and eight pairs of WNV-specific primers.

The nucleotide sequence of the prM-E genes of the WNV from Nuevo Leon State, Mexico (designated MexNL-03) was submitted to GenBank (GenBank accession no. AY426741). This region comprises 2004 nucleotides and corresponds to nucleotides 466 to 2469 of the genomic RNA of the WN-NY99 strain (8). Alignment of the MexNL-03 sequence with other known sequences in the GenBank database showed that it was most closely related to the homologous regions of three WNV isolates collected in Harris County, Texas, in June 2002 (strains 119, 123, and V1151; GenBank accession numbers AY185908, AY185909, AY185911 respectively). The MexNL-03 sequence differed from the Harris County isolates in three nucleotide positions (0.15% divergence; Table). In all cases, one change was in the prM gene at position 549, and two changes were in the E gene at positions 1179 and 1356. All substitutions were in the third codon position, and none resulted in an amino acid change. 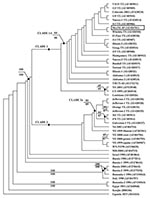 A phylogenetic tree was constructed by Bayesian analysis using the complete prM-E gene sequences of 49 WNV strains, including this WNV from Nuevo Leon State, Mexico (Figure 1). Phylogenetic trees were also generated using neighbor-joining (NJ), maximum parsimony (MP), and maximum likelihood (ML) analyses (data not shown). In the Bayesian tree, the WNV isolates from North America formed a monophyletic group consisting of two sister clades (denoted as clade 1 and 2). MexNL-03 shared a close phylogenetic relationship with isolates from inland Texas, consistent with our nucleotide sequence alignments. These viruses, along with isolates from Colorado, Illinois, Alabama, and Tabasco State, belonged to a nested clade (denoted as 1A) within clade 1. The statistical support for clade 1A by parsimony and distance bootstrap analyses were 64% and 66%, respectively. The other WNV isolates that clustered in clade 1 were from the eastern United States. Clade 2 contained WNV isolates from the southeast coastal area of Texas and the northeastern United States. The WNV isolates from coastal Texas formed a nested clade (denoted as 2A), confirming previous results (13,14). 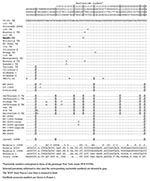 Figure 2. Parsimony-informative sites in the premembrane and envelope genes of selected West Nile viruses used in the phylogenetic analyses.

The parsimony-informative sites, corresponding to nucleotide positions 660, 1442, and 2466, were important in defining the topologic features of the tree (Figure 2). All 21 WNV strains in clade 1A contained a unique C to U substitution at 2466. All, except for the five most basal isolates, contained a unique C to T substitution at 660 and all, except for TM171-03, contained a unique T to C substitution at 1442. TM171-03 was basal to the other WNV strains in clade 1A, and this topologic arrangement was due to the single nucleotide difference at 1442. However, we consider it unlikely that TM171-03 was the predecessor of the other viruses in clade 1A. In addition, the parsimony and distance bootstrap analyses did not significantly support this topologic arrangement (bootstrap values = 50% and 51%, respectively). Moreover, WNV isolates from the northeastern United States occupied the basal position of clade 1. Similarly, the basal position of clade 2 was occupied by WNV isolates from the northeastern United States. Thus, our findings suggest that the WNV isolates circulating in the United States and Mexico diverged from a common ancestor from the northeastern United States.

The trees generated by NJ, MP, and ML analyses showed the same overall topologic features to the Bayesian tree, except that all of the coastal Texas isolates were basal to the Israeli isolate (data not shown). The bootstrap support for this topologic arrangement ranged from 58% to 73%. Similar findings were also reported by Estrada-Franco et al. (5). Furthermore, the WNV isolates from Maryland and New Jersey, as well as most of the isolates from New York, occupy the basal positions of clade 1 of the NJ/MP/ML trees. As a result, we have not shown the bootstrap values for clades 1 and 2 of the Bayesian tree because their composition does not match exactly to the corresponding clades of the NJ/MP/ML trees. However, the Bayesian analysis provides a more robust and efficient phylogenetic tool compared to more conventional phylogenetic techniques (15). Additional sequencing and phylogenetic analyses will be necessary to clarify these issues.

The data presented here indicate that WNV was introduced into Nuevo Leon State, Mexico, from inland Texas. A likely mode of introduction was by infected birds traveling for short distances (16). Earlier studies have provided serologic evidence of WNV infection in horses or birds in the nearby Mexican states of Coahuila, Tamaulipas, and Chihuahua (4,5,17). Taken together, our sequence data and the findings from the serosurveys indicate that WNV activity is now widespread in northern Mexico, as well as in other regions in Mexico (5,6,18). The geographic distribution of WNV in the Americas will likely continue to expand; thus, enhanced WNV surveillance in Mexico is warranted and urgent.

Dr. Blitvich is a postdoctoral scientist in the Department of Microbiology, Immunology and Pathology at Colorado State University, Fort Collins, Colorado. His research interests include the mechanisms of vector and host interactions in arbovirus transmission cycles.

We thank Alan Barrett and Scott Weaver for providing unpublished WNV sequences that were used in the phylogenetic analyses and Charles Calisher for critically reading the manuscript.

This study was supported by grant U50 CCU820510 from the Centers for Disease Control and Prevention and in part by grant AI45430 from the National Institutes of Health.