In 2000, the first outbreak of hantavirus pulmonary syndrome was recognized in the Brazilian Amazon (Maranhão State). An epidemiologic study identified a 13.3% prevalence of hantavirus-specific immunoglobulin G. The analysis of risk factors suggests that persons are occupationally exposed to infected rodents in the crop fields.

Hantavirus pulmonary syndrome (HPS), caused by a hantavirus later identified as Sin Nombre virus, was identified for the first time in May 1993 in the southwestern United States (1). The natural reservoirs of members of Hantavirus, a genus belonging to the Bunyaviridae family, are wild rodents of the Rodentia order, Muridae family, and Sigmodontina subfamily. The human disease is a zoonosis and is acquired by inhaling aerosols containing urine, feces, or saliva particles from infected wild rodents (2–4). The disease has been described in North, Central, and South America (4). 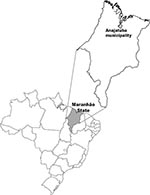 In 2000, the first outbreak of HPS occurred in the Brazilian Amazon region (5), specifically in Quebra and São Jerônimo, in a rural area of Anajatuba, state of Maranhão, Brazil (Figure). These two villages combined had a population of 535 inhabitants. The climate is semihumid tropical, and the main economic activities are raising cassava, rice, and corn on large plantations and fishing.

All of the inhabitants (or their legal guardians) in both towns who provided blood samples and signed the written and informed consent were included in the study. Those who did not provide blood samples were excluded (n = 137, 25.6%). No statistically significant differences were found with respect to sex and age between those studied and those excluded.

The measure of association used was the prevalence rate ratio (PRR) at the 95% confidence interval (CI). The Wald test was also used, and statistical significance was set at the 0.05 level. Those variables with p < 0.20 in the unadjusted analysis were included in the adjusted analysis. The variables with p < 0.10 were maintained in the final model after stepwise backward elimination was performed. Because prevalence of infection was >10%, the results were adjusted for confounding factors by using the Poisson regression model. Standard errors were adjusted according to the robust method, and the cluster effect was taken into account.

Antibodies of the IgG class were detected by enzyme-linked immunosorbent assay (ELISA), by using antigen of Sin Nombre virus (Centers for Disease Control and Prevention, Atlanta, GA). The serologic tests were performed in the Department of Viruses Transmitted by Arthropods at the Instituto Adolfo Lutz, São Paulo. The samples of human serum underwent a series of dilutions and were tested for recombinant nucleocapsid protein antigen of Sin Nombre virus and for the control recombinant antigen. One conjugate of antihuman IgG, prepared in mice and marked with peroxidase and the chromogen ABTS (2,2-azino-di [3-ethybenthiazoline sulfonate]), was used to show the reaction. Samples were considered positive when they showed an optical density higher than the value of the reactivity limit at a dilution of ≥1:400.

In the unadjusted analysis, age >17 years, being illiterate, living in consensual union, working as an agricultural laborer, fishing, using dead rats as bait for fishing, house sweeping, and killing rats in the field or inside the home were all significantly associated with infection by hantavirus. Those who had seen rats in the fields, had been bitten by a rat, or could recognize wild rats also were more likely to become infected (Table 1).

The Poisson regression analysis was done in three steps. In the first step (testing the significance of socioeconomic factors), illiteracy, consensual union, and agricultural work were associated with hantavirus infection. In the second step (studying the effect of behavioral variables), seeing rats in the field conferred a higher risk of infection. In the third step (assessing effects of demographic variables), age >17 years was associated with hantavirus infection (Table 2).

In the second stage of the study, a cohort of 292 seronegative persons was tested initially by hantavirus-specific IgG 6 months after the initial collection, with one seroconversion. Of the 291 persons who remained seronegative, 234 were retested for antibodies 24 months after the initial collection; 4 seroconverted. The survival table estimated a probability of seroconversion in 24 months of 1.7% (95% CI 0.5%–4.3%). Among those who seroconverted, two reported fever during the follow-up period.

A case-control study in the southwestern United States, to examine risk factors associated with HPS, showed no association between sex, age, and HPS (11). HPS patients were more likely to have observed rodents near the home, to have stored food in the home, and to have cleaned food storage areas. In our study, age >17 years as well as being illiterate and living in a consensual union were associated with infection by hantavirus in the adjusted analysis. However, storing food in the home was not associated with a greater seroprevalence.

The risk for exposure at home versus risk for occupational exposure must be clarified. In Anajatuba, the only behavioral variable that was independently associated with hantavirus infection was seeing rats in the crop fields, adding evidence to the theory that this disease could be linked to occupational exposure.

Hantavirus transmission to humans through wild rodent bites has been reported in cases of hemorrhagic fever with renal syndrome (12). Among those who reported rat bites, seroprevalence was 38.1%, p < 0.001 in the unadjusted analysis. However, in the adjusted analysis, this variable had a borderline association with seroprevalence.

Follow-up results from a seronegative cohort demonstrated that none of the persons that seroconverted met the criteria that would define a case of HPS, indicating that mild or asymptomatic clinical forms of the disease developed with greater frequency in those who became infected than did the classic form of HPS.

The results we observed must interpreted with caution because of the small population studied and the possibility of colinearity, since many of the variables correspond to activities with a similar potential for rodent exposure. Risk factors may vary according to the virus involved. The possibility of having a mixed group of case-patients exists because the antigen detects different hantaviruses.

We thank Pedro Lopes Aragão and Henrique Jorge Santos for assistance with the investigation.