The causative agent of pneumonia, the leading cause of infection-related death throughout the world, is unknown in 20% to 50% of cases (1). Therefore, identifying new causative agents of both community- and hospital-acquired pneumonia is a major public health goal. Aquatic bacteria such as Legionella spp., Pseudomonas spp., Stenotrophomonas spp., Burkholderia spp., and Acinetobacter spp. colonize hospital water supplies. These bacteria, such as L. pneumophila, have been causally associated with both hospital- and community-acquired pneumonia. Legionella spp. and other bacteria are associated with free-living amebas in natural and hospital aquatic environments (2). Bacteria that resist phagocytic destruction by amebas and are found in aerosolized water are potential agents of pneumonia (3). Ameba-associated bacteria other than L. pneumophila, including other Legionella spp., new α-proteobacteria belonging to the Bradyrhizobiaceae (Bosea massiliensis) family, and members of the genus Parachlamydia might be implicated in hospital-acquired pneumonia (4–6).

We studied serum samples from 376 Canadian patients with community-acquired pneumonia (121 ambulatory and 255 hospitalized) and from 511 healthy control subjects. Extensive clinical data were available for 104 patients with community-acquired pneumonia. All of these samples were previously tested for other pneumonia agents (4). To prepare antigen for microimmunofluorescence study, mimivirus was grown in Acanthameba polyphaga strain Linc AP-1 in 75-cm2 cell culture flasks with peptone yeast extract glucose medium as previously described (11). After amebal lysis occurred, unlysed amebas were removed by low speed centrifugation at 100 g for 15 min. Mimivirus particles present in supernatant were centrifuged at 4,000 g for 30 min and washed 3 times in phosphate-buffered saline (PBS). The pellet obtained after the last washing was then resuspended in PBS at 2 mg/mL concentration of protein and used as antigen in microimmunofluorescence assay under previously described conditions (5). Evidence of serologic reaction to mimivirus was defined as 1) seroconversion from <1:50 to >1:100 between acute-phase and convalescent-phase serum samples or a 4-fold rise in antibody titer between acute-phase and convalescent-phase serum samples, or 2) a single or stable titer of >1:400. The cut-off titer for single serum was chosen to have <2.5% positive rate in control subjects. We also tested paired serum samples from 26 patients with intensive care unit (ICU)-acquired pneumonia for a 1-year period and 50 paired serum samples from patients in our institution to determine antibodies to Rickettsia spp. as controls.

Genomic DNA of mimivirus was found in bronchoalveolar lavage specimens from patients in the ICU of the Ste. Marguerite Hospital, Marseilles, France; serologic reaction was studied in serum samples of the patients for 1 year. The study was retrospective; samples were tested anonymously from 12 to 18 months after sampling. Mimivirus was found in bronchoalveolar lavage specimens from 32 patients with ICU-acquired pneumonia and in specimens from 21 intubated control patients in ICU who did not have pneumonia (5). We designed 4 primer pairs chosen from the genome sequence of mimivirus. To avoid any contamination, we used a nested polymerase chain reaction (PCR), previously described as “suicide-PCR,” that incorporates 2 primer pairs used only once without positive control, followed by sequencing and comparing to the targeted sequence (13). DNA from patient and control BAL specimens, 3 water samples, and a suspension of A. polyphaga were extracted by using the QIAmp Tissue kit (QIAGEN GmbH, Hilden, Germany). DNA extracts from selected pathogens, including agents that are most commonly encountered in cases of hospital-acquired pneumonia (14), were tested: Enterobacter aerogenes, Proteus mirabilis, Citrobacter freundii, Escherichia coli, Citrobacter koseri, Klebsiella pneumoniae, Enterobacter cloacae, Serratia marscescens, Haemophilus influenzae, Moraxella catarrhalis, Acinetobacter baumanii, Stenotrophomonas maltophila, Pseudomonas aeruginosa, Bacteroides fragilis, Prevotella intermedia, Streptococcus pneumoniae, Streptococcus oralis, Staphylococcus aureus, Staphylococcus epidermidis, Candida albicans, CMV, HSV1, and adenovirus. Extracted DNA was used as template with primers BCFE (5′-TTATTGGTCCCAATGCTACTC-3′) and BCRE (5′-TAATTACCATACGCAATTCCTG-3′) as external primers and BCFI (5′-TGTCATTCCAAATGTTAACGAAAC-3′) and BCRI (5′-GCCATAGCATTTAGTCCGAAAG-3′) as internal primers. A minimum of 1 negative control was used for every 2 samples from patients with pneumonia; testing was conducted in a blinded manner. 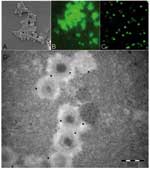 Figure. . As observed by scanning electronic microscopy, mimivirus antigen (A) is recognized by antibodies in our microimmunofluorescence assay using conventional fluorescence microscope (B) and confocal microscope (C). Mature particles within amebas...

Serologic evidence of infection was observed in 5 (19.2%) of 26 ICU patients. None of the 50 control patients was positive for mimivirus (p < 0.01). Mimivirus DNA was detected in bronchoalveolar lavage specimen from a 60-year-old comatose patient who had 2 episodes of hospital-acquired pneumonia during hospitalization in ICU. Mimivirus DNA was amplified from the second episode sample only. The sequenced amplified fragment was 100% homologous to the target DNA (GenBank accession no. AY026860). No serum sample was available from this patient. None of the DNA extracts from control microorganism showed a positive PCR reaction. The finding of mimivirus DNA in the bronchoalveolar lavage specimens from an ICU patient with nosocomial pneumonia confirms that mimivirus may reach the respiratory tract of these patients. Because of the procedure used for suicide PCR amplification, contamination appears highly unlikely. In this patient, however, we cannot distinguish colonization and infection, but this feature is common to most microorganisms isolated from respiratory samples.

This high rate of seroconversion observed in patients with pneumonia from our seroepidemiologic study suggests that community-acquired pneumonia and hospital-acquired pneumonia patients may have contact with mimivirus or a cross-reacting agent. As we do not report direct evidence of infection by mimivirus, these results have to be interpreted with caution. Viruses usually have a broad range of hosts, but the extraordinary size of the mimivirus genome (1.2 Mb), comparable to that of small bacteria such as Mycoplasma (17), suggests a possible adaptation to an extended range of hosts. We propose that mimivirus be tested as a possible novel human pathogen among ameba-resisting microorganisms. These results are preliminary, but raise the question of the pathogenic potential of the biggest identified virus to date. Mimivirus is an agent easy to cultivate and is freely available from our laboratory on request to researchers working on pneumonia who wish to introduce mimivirus antigen in serologic tests to confirm our results.

Dr. La Scola is professor of bacteriology at Université de la Méditerranée, Marseille, France. He is member of the Unité des Rickettsies (CNRS UMR6020, World Health Organization reference center for rickettsiae and rickettsial diseases). His fields of interest are the isolation and description of fastidious bacteria, including Coxiella, Rickettsia, Bartonella, Tropheryma, and ameba-associated bacteria.