Similar Biochemical Signatures and Prion Protein Genotypes in Atypical Scrapie and Nor98 Cases, France and Norway 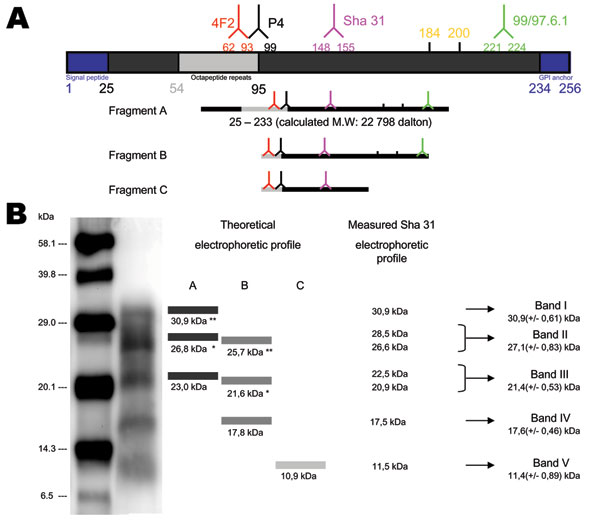 Figure 3. A) Schematic representation of ovine PrPc with location of epitopes recognized by the monoclonal antibodies used during the study and approaching sizes of PrPres fragments in atypical scrapie and Nor98 isolates. Theoretical apparent MWs of PrP fragments were calculated, by using those of each amino acid included in the known ARQ sheep PrP sequence, according to Sambrook and Russell (17). B) Interpretation of PrPres Western blot (WB) profiles in atypical scrapie and Nor98 isolates. Theoretical WB profile shows the expected apparent molecular masses of glycosylated PrP forms estimated by addition of 3.8 (*, monoglycosylated) or 7.9 (**, diglycosylated) kDa to the apparent molecular masses of A and B PrPres forms observed after PNGaseF deglycosylation. Values of 3.8 and 7.9 kDa were estimated from comparisons of glycosylated and unglycosylated forms in a classic scrapie isolate. The Sha31 WB profile included the mean apparent MWs assessed from highest resolution WB analysis (n = 32) and showed 2 separate peaks of maximal intensity in pictograms of signal intensities of bands II and III (19 sheep scrapie isolates).