Oropouche virus (OROV), the cause of Oropouche fever, belongs to the family Bunyaviridae, genus Orthobunyavirus, Simbu serogroup (1), and is transmitted between humans in urban areas by the biting midge Culicoides paraensis (2,3). This virus was first isolated from febrile forest workers in Trinidad in 1955. The first isolation in Brazil was in 1960 from the blood of a sloth (Bradypus tridactylus) (4). The epidemic potential of OROV was recognized during an outbreak in Belém, Pará State, Brazil, in 1961, where ≈11,000 persons were infected (4). Over the past 45 years, many outbreaks of Oropouche fever, ≈500,000 cases, have been described in the Americas. OROV has been isolated in Trinidad, Panama, Peru, and Brazil, and in the past 40 years Oropouche fever has emerged as a public health problem in tropical areas of Central and South America (3).

Members of the genus Orthobunyavirus have a tripartite, single-stranded, negative-sense RNA genome of small (S), medium (M), and large (L) RNAs that encode nucleocapsid, glycoproteins, and RNA polymerase, respectively. Phylogenetic analysis of nucleocapsid genes of different OROV strains identified 3 distinct genotypes (I, II, and III) currently circulating in Central and South America; genotypes I and II have been detected in the Brazilian Amazon (5). Recently, an OROV isolate from a marmoset (Callithrix sp.) was characterized as a member of genotype III (6).

Figure 1. Map of Brazil showing locations where Oropouche fever outbreaks were identified during 2003–2004 and previous locations of this disease.

A total of 125 and 109 serum samples were collected from residents of Parauapebas and Porto de Moz, which represented 12.8% and 5.45% of all inhabitants, respectively. Criteria for sampling were a history of acute fever several weeks before or during the survey or clinical symptoms similar to those of Oropouche fever. All serum samples were analyzed by hemagglutination inhibition (HI) test (7) and immunoglobulin M–ELISA (8) for specific HI and IgM antibodies to OROV. HI titers >20 and ELISA results greater than the cut-off value (optical density >0.200) were considered positive (8).Virus isolation was conducted by intracranial injection of newborn mice with a 1:10 (v/v) suspension of serum samples in phosphate-buffered saline, pH 7.4, as described elsewhere (9). Fifty-four and 11 serum samples from Parauapebas and Porto de Moz, respectively, were used for virus isolation. Identification of isolates was performed by complement fixation test as reported (9). Two OROV strains were isolated from patients in Parauapebas, and 2 strains were isolated from patients in Porto de Moz.

To genetically characterize the viruses, 2 isolates were selected from Parauapebas (Brazil 2003a and Brazil 2003b) and 2 from Porto de Moz (Brazil 2004a and Brazil 2004b). Viral RNA was extracted from Vero cells infected with human samples, and S RNA was amplified by using a 1-step reverse transcription–PCR assay as described (5,6). Phylogenetic trees were constructed for nucleocapsid gene nucleotide sequences by comparison with other OROV nucleocapsid gene sequences in GenBank (Table 1); neighbor-joining analysis (10) implemented in Mega version 2.1 (11) was used. Bootstrap analyses were performed on 1,000 replicates to generate confidence for groupings (12).

A total of 71.9% of female patients in Parauapebas and 59% in Porto de Moz had symptoms suggestive of Oropouche fever. Although all age groups were affected, persons 5–14 years of age had the highest frequency of symptoms (30.4%) and those <1–4 years of age had the lowest frequency (4.8%) (Table 2). Symptoms most frequently reported were fever (100%), headache (79.3%), joint pain (68.7%), and muscle pain (30%). Seventy percent of patients reported ≥1 episode of recurrence of fever, characterized by fever, headache, and other symptoms ≈2–3 weeks after onset of initial symptoms (2,3). 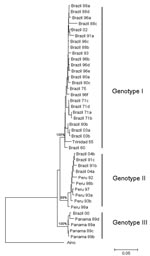 Oropouche fever is the second most common arboviral disease (after dengue fever) in the Brazilian Amazon region. From 1960 to 1980, Oropouche fever outbreaks were detected only in Pará State, mainly in Belém and neighboring areas, where thousands of people were infected (2,3). OROV was then detected in other Amazonian states including Amazonas, Amapá, Acre, Rondônia, and Tocantins; and non-Amazonian states, including Maranhão in northeastern Brazil and Tocantins in central Brazil (3,8). Recently, OROV isolated from Callithrix sp.in Arinos, Minas Gerais State, southeastern Brazil was characterized as genotype III, which indicated the presence of this genotype in Brazil (6). OROV from this species has been identified only in Panama (5). From 1980 to 2005, sporadic cases or self-limited outbreaks of Oropouche fever were reported in areas of the Brazilian Amazon, which suggested silent endemic circulation of the virus (13). In 2003 and 2004, several cases of Oropouche fever were detected in Parauaebas and Porto de Moz in Pará State. Parauaebas is located in the Carajás mineral province and Porto de Moz is located in the Altamira region.

Genetic characterization of strains indicated the presence of genotype II in the eastern Amazon region. This genotype had been associated with cases of Oropouche fever in restricted western Amazonian areas (Rondônia State), as well as in Peru (5). This finding suggests movement of OROV genotype II across the Amazon region from western to eastern areas or emergence of this genotype after silent circulation for several years. Genotype I (Brazil 2003a and Brazil 2003b) found in Parauapebas was closely related to Trinidadian and Brazilian isolates obtained from 1955 through 1960 (Trinidad 55 and Brazil 60) (5). Genotype II strains isolated in Porto de Moz were genetically related to strains isolated in Peru during the 1990s (Peru 92, 93, 97, 98a, 98b) and Rondônia State in 1991 (Brazil 91a, 91b), as reported by Saeed et al. (5). These data indicate that Parauapebas and Porto de Moz OROV isolates are genetically distinct and have different ancestor viruses (Figure 2). Recognition of different OROV genotypes in the Brazilian Amazon, as well as new genetic information, is useful for understanding the epidemiology and genetic diversity of this emergent human pathogen.

Dr Azevedo is a physician in the Department of Arbovirology and Hemorrhagic Fever at the Instituto Evandro Chagas, Ministry of Health, Belém, Pará State, Brazil. Her research interests include clinical, epidemiologic, and experimental studies of arboviruses, particularly those responsible for illness in humans.