Human myiasis caused by bot flies of nonhuman animals is rare but may be increasing. The treatment of choice is laser photocoagulation or vitrectomy with larva removal and intraocular steroids. Ophthalmomyiasis caused by Hypoderma spp. should be recognized as a potentially reversible cause of vision loss.

Ophthalmomyiasis interna is invasion of the globe by larvae of any species of oestrid flies; ophthalmomyiasis externa involves only the external ocular structures (1). Dermatobia hominis, endemic to tropical or subtropical areas, and Oestrus ovis (sheep bot fly) cause most cases of ophthalmomyiasis (2). Both typically cause ophthalmomyiasis externa (2). Only 2 bot flies inhabit Nearctic circumpolar regions: the Caribou bot fly (Hypoderma tarandi) and the Caribou nasal bot fly (Cephenemyia trompe), a nonhuman pathogen (2). H. tarandi is a nonbiting fly whose obligate endoparasitic larvae typically affect caribou throughout their circumpolar range (2,3). From late June to early September. the fly lays eggs directly on the guard hairs of the caribou (2,3). Once deposited, eggs hatch into larvae that penetrate skin (3). They move subcutaneously to reach the animal’s dorsal region, where they cut breathing holes and are encased within granulomatous cysts, termed warbles. There they develop for 9–11 months; in May or June of the following year, they leave the animal and pupate on the ground (3). Mated adult females are capable of long flights (≈900 km) in search of suitable hosts (3).

Infestations by H. tarandi in humans are rare but are likely underreported (4). Related species, H. bovis and H. lineatum, inhabit various regions of North America, Europe, and Asia and have also been implicated in human disease (2,5). A third species that affects cattle and yaks in China (H. sinense) is also responsible for human infestations (2). The pathophysiology of human ophthalmomyiasis by Hypoderma spp. is not known. Eyebrows and eyelashes have been suggested as possible targets for oviposition (3). Oviposition on human scalp hair has been achieved experimentally and could be the preferential site in humans (3). An alternative explanation is transfer of the larvae directly from the guard hairs of the caribou to the human eye or skin through close contact with animal pelts. The parasite does not appear to complete its life cycle in humans (1,2).

The Cases and Literature Review 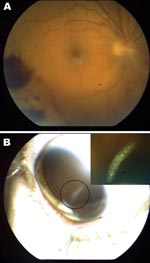 Figure 1. A) Retinal hemorrhages visible on funduscopic examination of right eye of a 41-year-old woman, Nunavut, Canada, with ophthalmomyiasis intern). B) Segmented 3-mm larva with a cylindrical body, no visible spines, and...

The first patient was a 41-year-old woman from Rankin Inlet, Nunavut, Canada, who noticed floaters (objects in the field of vision that originate in the vitreous) in her right eye in August 2006. Initial funduscopic examination showed posterior vitreous detachment. Two weeks later, her vision was more impaired; repeat funduscopy showed panuveitis. Pretreatment blood count was within normal limits with no eosinophilia. Topical steroids were ineffective. At a third assessment, her visual acuity was 20/400; funduscopic examination showed an intraocular larva (Figure 1). The parasite appeared to recede behind the retina and could not be photocoagulated. A pars plana vitrectomy and intraocular laser treatment of the entry and exit sites were performed. Triamcinolone (0.4 mg) was administered for intraocular inflammation, and antibiotics were given as prophylaxis. The larva was not recovered. Postoperative magnetic resonance imaging demonstrated no parasite or abnormality. The larva was assumed to be that of H. tarandi because of its appearance (shape, size, and segments), the late summer timing, and the patient’s residence in the subArctic. Serologic testing for H. tarandi by Western blot, as described by Baron and Colwell, was performed (6). Six weeks after symptom onset, serum was positive for immunoglobulin (Ig) G, IgE, and IgM to hypodermin C, a larval collagenase of H. tarandi (7). No seroreactivity to the hypodermins A and B of H. lineatum was observed. Because the larva was unrecoverable, the patient was treated with 1 oral dose (9 mg) of ivermectin (Merck & Co., Kirkland, Quebec, Canada) 1 week after vitrectomy. After 6 months, her visual acuity had improved to 20/30. 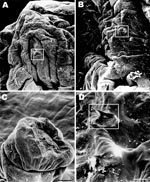 Figure 2. Scanning electron microscope images of the parasite from an 11-year-old Inuit boy, Nunavut, Canada. A) Anterior end of the maggot. The cephalic segment is evident; mouth and mouth hooks are present...

The second patient was an 11-year-old Inuit boy from Chesterfield Inlet, Nunavut, Canada, who was examined in October 1997 because of a painful right eye, scleral redness, and blurry vision. Examination found uveitis and glaucoma. Topical steroid therapy was begun, after which retinal detachment, hemorrhages, and a 4-mm larva in the subretinal space were noted. Blood work showed marginal eosinophilia; computed tomographic examination of the brain and orbits showed no abnormalities. The larva was removed by pars plana vitrectomy and retinotomy. Examination of the larva by dissection microscopy showed a 4 × 1–mm larva. Scanning electron microscopy, performed according to Colwell et al. (8), confirmed the characteristic of the first instar of Hypoderma spp., i.e., mouth hooks, anterior sensory structure, spines, and spiracles (Figure 2). The presence of only 2 lateral spines per spiracle indicated H. tarandi. Western blot testing showed the presence of IgG only to hypodermin C. When asked about his exposure to caribou, the boy admitted to tracking, hunting, and skinning caribou. The patient’s disease progressed despite therapy, and his eye was enucleated. Pathologic examination showed retinal detachment, eosinophilic choroiditis, and retinitis. Chronic nongranulomatous inflammation was noted in the ciliary body and iris. No additional larvae were found.

We searched the literature, using PubMed, for the terms “ophthalmomyiasis” with limits “human” and “English.” We also reviewed references of selected publications. We reviewed only cases of ophthalmomyiasis interna caused by oestrid flies found in North America, which were confirmed by visible larvae (Appendix Table). Demographics and clinical presentation of patients are in the Table. For statistical analysis, outcomes were separated into good (vision unchanged from baseline or better than 20/80), moderate (able to see shapes or fingers or vision worse than 20/80 but not blind), and severe (able only to see light or movement, completely blind or enucleated). Although moderate or severe vision loss appeared to occur more commonly with Hypoderma than Cuterebra infestations (53.3% vs 14.3%), this frequency was not statistically significant (p = 0.08). Photocoagulation appeared to produce better outcomes (80% good outcomes) than no intervention (73.7% good outcomes) or surgical removal/vitrectomy (41.2% good outcomes); however, χ2 analysis showed no statistically significant difference (p = 0.121). This observation may suggest that by the time the patient seeks treatment, damage to ocular structures has already occurred. Recent cases have been treated with photocoagulation or vitrectomy and intraocular steroid administration. Although no specific intervention is associated with better outcomes, given the difficulty in studying outcomes in this rare condition and the success of this therapy for other foreign bodies in the eye, this course of action is reasonable. Ivermectin as medical therapy for ophthalmomyiasis interna has not been reported, but it is effective as therapy and prophylaxis for bot fly infestation of livestock (9). Ivermectin as adjunctive therapy in select cases of ophthalmomyiasis may be of benefit, but evidence is lacking. Only 1 case of ophthalmomyiasis externa caused by D. hominis and treated with ivermectin has been reported (10).

Human myiasis caused by bot flies of nonhuman animals is rarely reported. However, diagnoses may increase as a result of increasing population in northern latitudes, encroachment into habitats with natural hosts like caribou, and better access to ophthalmologists. The treatment of choice seems to be laser photocoagulation or vitrectomy with larva removal and coadministration of intraocular steroids. In areas where Hypoderma spp. are common, healthcare providers should consider this condition and promptly refer patients to an ophthalmologist.

Dr Lagacé-Wiens is a fellow in the department of Medical Microbiology and Infectious Diseases at the University of Manitoba in Winnipeg, Canada. His interests are parasitic and tropical diseases, antimicrobial drug resistance, and infectious diseases.