Several Cryptosporidium spp. are known to infect humans, but most cases of illness are caused by Cryptosporidium hominis or C. parvum. During a long-term genotyping in the United Kingdom, we identified 3 unusual Cryptosporidium genotypes (skunk, horse, and rabbit) in human patients with diarrhea.

Cryptosporidium spp. are frequently a cause of diarrheal disease in immunocompetent as well as immunocompromised humans. Over the past decade molecular methods have enabled the characterization and identification of species and genotypes within the genus. The taxonomy is under continual review, but so far 20 valid species and numerous genotypes have been described. Many are named after the original host from which the isolate was recovered and are often referred to as “host-adapted” (1,2). Most human infections are caused by C. hominis or C. parvum but C. meleagridis, C. felis, C. canis, C. suis, C. muris, C. andersoni, C. hominis monkey genotype, cervine genotype, and the chipmunk genotype I have also been detected (1–6). The immune status of the host is not necessarily linked to infection with other species/genotypes (1,7). We describe 3 unusual Cryptosporidium genotypes detected in human patients with diarrhea.

Since 2000, the UK Cryptosporidium Reference Unit has maintained a national collection of Cryptosporidium oocysts (8). Over 16,000 Cryptosporidium-positive human fecal samples have been submitted by primary diagnostic laboratories and characterized by the Reference Unit to identify the infecting species. In addition to the expected C. hominis, C. parvum, and small number of C. meleagridis, C. felis, C. canis, and cervine genotype isolates, 3 other genotypes (skunk, horse, and rabbit) were identified in separate samples from individual patients after the onset of diarrhea in 2000 (sample W971), 2003 (sample W6863), and 2007 (sample W16103). A routinely collected minimum dataset was submitted with each sample, and further exposure data were collected for each patient from the local Consultant in Communicable Disease Control.

To confirm identification, phylogenetic analysis was conducted in TREECON (www.bioinformatics.psb.ugent.be/software/details/3) with other known Cryptosporidium spp. and genotypes by using alignments generated in ClustalX version 2.0 (ftp://ftp.ebi.ac.uk/pub/software/clustalw2) and manually edited in BioEdit version 7.0.9 (www.mbio.ncsu.edu/BioEdit/bioedit.html). All sequences generated in this study have been submitted to GenBank under accession nos. EU437411–EU437418. 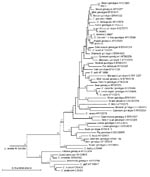 Figure. Phylogenetic relationships between 3 unusual Cryptosporidium genotypes and known Cryptosporidium species/genotypes as inferred by a neighbor-joining analysis of the small subunit rRNA gene. Evolutionary distances were calculated by the Kimura 2-parameter...

At the SSU rRNA and HSP70 genes, sequence analysis confirmed that W971, W6863, and W16103 were skunk, horse, and rabbit genotypes, respectively (Table). Isolate W971 was homologous with genotype W13 found in storm water, which, in turn, is the skunk genotype (6). Initially, the BLAST search for isolate W6863 erroneously indicated C. parvum as the most probable identity at the SSU rRNA gene, but this was due to the short length (484 bp) of the only horse genotype sequence available (AY273770) for comparison. Thus, C. parvum isolates that spanned our whole query sequence (787 bp) were calculated to have greater identities by BLAST. However, a detailed comparison between AY273770 and W6863 showed only 2-bp differences (including 1 insertion in our sequence) compared with 7-bp differences between W6863 and C. parvum. W6863 was confirmed as a variant of the horse genotype by HSP70 gene sequence analysis and SSU rRNA gene phylogenetic analysis (Figure).

PCR-RFLP analysis of the SSU rRNA and COWP genes differentiated the skunk and horse genotypes from the most common human pathogens. However, identifying the rabbit genotype by PCR-RFLP at these loci was more problematic because of this genotype’s close relationship with C. hominis. The sequence and restriction pattern are identical at the COWP gene and, with only 4-bp substitutions (2 occurring in SspI cut-sites), the pattern is similar at the SSU rRNA gene. Increasing the resolution by running the agarose gel at an appropriate concentration and for as long as possible is important for the separation of the C. hominis diagnostic band (449 bp) from the rabbit genotype (472 bp).

Previously, these 3 genotypes were known to cause infections only in wild or zoo animals (13,14). Wild animals are known to be an important source of Cryptosporidium oocysts in environmental samples and we have detected the rabbit genotype in surface waters and septic tank samples (unpub. data), but the source is unknown. Since many isolates have yet to be found in humans and although little is actually known about them, they are assumed to be insignificant to public health (6,15). The importance of unusual genotypes in humans who seek treatment for diarrheal disease warrants further investigation.

We thank the consultants at the Communicable Disease Control and Health Protection Units for providing additional patient information; the staff at the UK Cryptosporidium Reference Unit for scientific, administrative, and technical support; the primary diagnostic laboratories for contributing the specimens; and Meirion Evans for his helpful comments.

Samples were collected as part of the National Collection of Cryptosporidium Oocysts, in part funded by Welsh Assembly Government and Department for Environment, Food & Rural Affairs (administered by the Drinking Water Inspectorate).