We studied Mycobacterium avium lymphadenopathy in 183 Swedish children (<7 years of age) from 1998 through 2003. Seasonal variation in the frequency of the disease, with a peak in October and a low point in April, suggests cyclic environmental factors. We also found a higher incidence of the disease in children who live close to water.

Mycobacterium avium is the most common of the nontuberculous mycobacteria that infect otherwise healthy children (1). It manifests as a chronic granulomatous lymphadenopathy in the neck region that preferably is treated by excision of the affected lymph node (2). In Sweden the incidence of nontuberculous mycobacterial disease in children increased from 0.06/100,000 population to 5.7/100,000 after discontinuation of the general BCG (Bacillus Calmette-Guérin) vaccination program in 1975 (3).

M. avium is common in the environment. It has been isolated from natural and human-made water systems as well as from soil and animals (4,5). The role of animals in its epidemiology is not clear. The main hypothesis is that oral contact with M. avium–infected water causes lymphadenitis in the head and neck region (4). An environmental study in nearby Finland found nontuberculous mycobacteria in 100% of brook water samples (6).

Human populations who live close to water have a higher proportion of persons with positive reactions to M. avium and other nontuberculous mycobacterial sensitins (7,8). In Sweden, 25.4% of non-BCG–vaccinated schoolchildren in an urban coastal area reacted to M. avium sensitin (7). In studies from Canada and the United States/Canada, M. avium disease in children has previously shown no seasonal variation (9), or it has been dominant in winter, spring, or both (1,2).

In Sweden, nontuberculous mycobacterial infection has been a reportable disease since 1989; all cases are reported to the Swedish Institute for Infectious Disease Control. From 1998 through 2003, 186 culture-positive cases of M. avium infection in children <7 years of age were reported. We registered age and residence and reviewed the children’s medical records to establish the month of onset of disease (date parent discovered an enlarged lymph node). Permission to conduct the study was obtained from 6 of the 7 ethical committees in Sweden. We collected information from 127 patient records. To these we added 35 cases that occurred during 1983–1997 (3,10). One patient with lung infection and 2 children whose home addresses could not be located were excluded. Altogether, 183 children (1998–2003) were included in the geographic analysis, and 162 children (1983–2003) with culture-proven M. avium lymphadenopathy were included in the analysis of seasonal variation.

Sweden is divided into 290 urban and rural districts. The exact number of children <1–6 years of age in every district is known for each year during 1998–2003. Each district was evaluated by using a map with a scale of 1:300,000. Within each district we estimated the proportion of the total child population 1) living within 5 km of the coast or a big lake or within 2 km of a small lake or river and 2) living in the different cultivation zones 1–8 (zone 1 being the warmest, as defined by the Swedish association for leisure gardeners). A cultivation zone and a water category (salt or brackish water, fresh water, or no water) were assigned to each case-patient according to the home addresses of the children. We assumed most children were infected in the area where they resided. 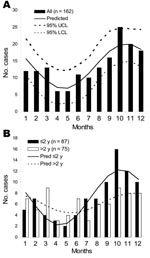 The overall annual incidence rate of culture-verified M. avium lymphadenopathy in children <1–6 years of age in Sweden during 1998–2003 was 4.5/100,000 children. Seasonal variation was statistically significant (p<0.05), with a peak in October and a low point in April (Figure 1). The mean time from onset of symptoms at home to diagnostic puncture at a hospital was 4.3 weeks. The incubation period is unknown. From in vitro growth data, we assumed that the time of infection was 2–8 weeks or longer before clinical manifestations. Seasonal variation tended to be more accentuated in children <24 months old (Figure 1). Our interpretation is that younger children might have shorter incubation periods (weeks) because of their immature immune systems (11), whereas the incubation periods of older children might be longer (weeks to months) and more variable, resulting in a shift to the right and a flattened sinusoidal curve. Thus, the curve of the data for the younger children would be closer to an imagined curve of “true” inoculation time.

We found no significant difference in seasonal variation when we compared colder (4–7) and warmer (1–3) cultivation zones. Because of compensation after the vernal equinox of more light in the North, the beginning of meteorologic spring and summer differs no more than 1 month between cultivation zones (www.smhi.se). Spring means better temperature and nutritional conditions for growth of bacteria in nature. M. avium can enter a metabolic state of dormancy in response to starvation and recover rapidly when conditions improve again (12). We speculate that the observed seasonal variation is due to a combination of changing temperature and nutritional conditions in the environment throughout the year as well as changing human activities in different seasons. The reason why previous studies have not shown this seasonal variation might be due to a smaller number of investigated cases (9), the inclusion of more heterogeneous materials (older children and other mycobacteria beside M. avium), or conduction of studies in regions with less clear-cut seasonal variations than Sweden.

Our results also show a correlation between M. avium clinical disease in children and living close to water (Figure 2). Socioeconomic status usually is associated with living close to water. In Sweden, however, socioeconomic differences in society are small and therefore not likely to be a confounding factor. Correlation to water has previously only been incidental—indirectly implied by studies of sensitin reactivity in healthy populations (7,8) and by the isolation of M. avium from natural and man-made water systems (4). However, 1 Swedish sensitin study, conducted in an urban area situated by the sea, disagrees with our results. It found a high sensitivity to M. avium PPD (7), whereas the incidence of clinical disease in our material is low in the same area. We speculate that the reason for this could be that inhalation of M. avium–containing aerosols might be sufficient to convey sensitin positivity but that acquisition of the clinical disease demands close contact with and oral ingestion of natural water, which are less likely to happen to a child who lives in a city. Seasonal variation and higher incidence in regions near natural fresh water compared to inland areas and cities indicate that the source of M. avium transmission is outdoor natural water rather than tap water.

Dr Thegerström is a doctoral student at the Institute for Molecular and Clinical Medicine, Linköping Medical University, Sweden. She works as a pediatrician at Kalmar County Hospital, Kalmar, Sweden.

We thank Britt-Inger Marklund for valuable comments on the manuscript.

This work was funded by the Health Research Council of Southeast Sweden (FORSS).