Stool specimens were obtained from HIV-infected adults in Kingston, Jamaica, as part of routine parasitologic diagnosis. All patient identifiers were removed before specimen acquisition. A total of 35 Cryptosporidium-positive stool specimens were collected from May 2003 through July 2007. Only 1 specimen per patient was included in the study. Specimens were collected from multiple hospitals in Kingston; some of the patients were from outlying areas who came to Kingston for medical care. Specimens were stored in 2.5% potassium dichromate at 4°C before analysis. Thereafter, DNA was extracted by using the FastDNA Spin Kit for Soil (Qbiogene Inc., Carlsbad, CA, USA); Cryptosporidium spp. were identified on the basis of PCR–restriction fragment length polymorphism analysis of the small subunit ribosomal RNA gene as described (7). Identification of C. hominis and C. parvum subtypes was based on sequence polymorphism at the 60-kDa glycoprotein gene (GP60) locus by using the nomenclature described (8). Nineteen of the 25 C. hominis–positive specimens and all 7 C. parvum–positive specimens were analyzed by MLST. The typing targeted 5 additional loci, including the 47-kDa protein (CP47 microsatellite), a serine repeat antigen (MSC6–7 minisatellite), a hypothetical retinitis pigmentosa GTPase regulator (RPGR minisatellite), and a hydroxyproline-rich glycoprotein (DZHRGP minisatellite and microsatellite) in chromosome 6 and the 70-kDa heat shock protein (HSP70 minisatellite) in chromosome 2. Nomenclature and classification of subtypes at these 5 loci have been described (9).

Results of the MLST analysis of the additional 5 loci showed limited gene diversity in C. hominis. At the CP47 locus, all 19 specimens analyzed belonged to subtype IA39G22. Most of the other loci were also monomorphic, and subtypes at these loci were identified by amplicon sizes. All specimens were 590 bp at the DZHRGP locus, 358 bp at the RPGR locus, and 1,095 bp at the HSP70 locus. At the MSC6–7 locus, 18 of the 19 C. hominis specimens analyzed were 494 bp; 1 was 509 bp.

Diversity was more pronounced in the MLST analysis of C. parvum, although all specimens belonged to IIcA5G3d subtype at the GP60 locus. There were 3 subtypes at the DZHRGP locus. Subtype 1 was 496 bp and was found in 4 specimens. Subtype 2 was also 496 bp but had 1 single nucleotide polymorphism at position 314; this subtype was seen in 2 specimens. Subtype 3 was 499 bp and was found in 1 specimen. The HSP70 locus had 2 subtypes, differentiated by the presence of a single nucleotide polymorphism (a change of C to T at position 172), with 6 of the 7 specimens in 1 subtype. All C. parvum specimens were monomorphic at the CP47, MSC6–7, and RPGR loci. Results of the C. hominis and C. parvum subtyping at the 5 loci are shown in the Table. 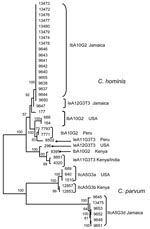 Figure. Relationships among Cryptosporidium hominis and C. parvum multilocus sequence subtypes at 5 genetic loci. Parasite population from Jamaica was compared with that from other regions by neighbor-joining analysis of concatenated sequence...

To measure the degree of heterogeneity of C. hominis and C. parvum, an MLST analysis was conducted to compare MLST types from Jamaica with those from other geographic areas of similar GP60 subtype families Ib, Ie and IIc (Kenya, Peru, India, and USA). All sequences for each specimen at the 5 loci were concatenated and multilocus subtypes generated. The analysis showed C. hominis multilocus subtypes from Jamaica clustered in 1 group, regardless of their GP60 subtype designation. Specimens of the same GP60 subtypes from other regions clustered in clades separate from the Jamaica specimens, forming largely distinct monophyletic groups defined by geographic origin. Specimens from Kenya and India clustered in 1 clade because of extensive human migration between the 2 countries. Although all C. parvum specimens from Jamaica were identified as IIcA5G3d, 4 MLST types were present, highlighting the extent of genetic diversity of C. parvum in this study. The relationship of the multilocus subtypes based on the 5 loci inferred by neighbor-joining analysis is shown in the Figure.

Results of our study show that anthroponotic transmission is important in the epidemiology of cryptosporidiosis in Jamaica. This conclusion is based on our finding of C. hominis and anthroponotic C. parvum (the IIc subtype family) in 33 (94%) of 35 specimens analyzed. Because all C. parvum–positive specimens belonged to the anthroponotic subtype family IIc and because 1 of the C. felis–infected patients had concurrent infection with C. hominis, it is possible that some of the C. canis and C. felis infections seen in this study were transmitted through anthroponotic pathways.

Results of the GP60 subtyping showed only 2 C. hominis subtype families (Ib and Ie); most belonged to the IbA10G2 subtype. Although the sample size is small, homogeneity within C. hominis at the GP60 locus is unusual, as common subtype families such as Ia and Id are usually equally abundant in most developing countries (2,10,11). Only some industrialized nations, such as Portugal and the United Kingdom, are known to have limited heterogeneity in C. hominis infections in humans (12,13). The GP60 subtype IbA10G2 identified here is identical to that previously reported in the United States, the United Kingdom, Portugal, South Africa, and Peru. Another Ib subtype, IbA9G3, which was commonly reported in India, Malawi, and Australia (4,8,10–12), was not seen in the specimens from Jamaica. Likewise, most Ie infections in humans are caused by IeA11G3T3, but our study identified a less common subtype, IeA12G3T3, which was also found in specimens from New Orleans (USA) and Australia (4). The limited number of GP60 subtypes would suggest an epidemic mode of transmission. The extended period of specimen collections and the identification of other Cryptosporidium species do not indicate that a cryptosporidiosis outbreak occurred during this long study period.

All C. hominis specimens from Jamaica, irrespective of the GP60 subtype (IbA10G2 or IeA12G3T3), belonged mostly to 1 MLST group distinct from other subtypes from other geographic regions. These results suggest that a unique C. hominis parasite population is being transmitted in Jamaica. Heterogeneity was higher in the C. parvum population despite the smaller number of specimens that we analyzed. As with C. hominis, a unique population of C. parvum in Jamaica also seems to exist. These results further show the distinct population of Cryptosporidium spp. that can arise because of geographic segregation. When one considers that all C. parvum specimens belonged to only 1 GP60 subtype, whether the high diversity seen with the MLST is due to recent expansion of an ancestral type in the region is not clear. A study of population genetics of Cryptosporidium spp. from humans in Haiti showed limited multilocus subtypes in both C. hominis and C. parvum, which was interpreted as an indication for an epidemic clonal population for both species (6).

The occurrence of unique multilocus subtypes in both C. hominis and C. parvum populations in Jamaica that can be differentiated from other geographic regions, including the nearby United States, is notable and requires further investigations. The distinction is important in mapping the transmission of the parasite, especially where tracking infection pathways is necessary, such as in investigations of outbreaks and traveler’s diarrhea. The fact that C. hominis from different areas may have an identical GP60 subtype but a different MLST subtype is also noteworthy, as some C. hominis subtypes, such as IbA10G2, are commonly associated with water-borne outbreaks in industrialized countries. The clinical manifestations of the GP60 subtypes in relation to the distinct MLST from different geographic areas needs to be studied further. This would clarify how geographic segregation in Cryptosporidium MLST subtypes relates to GP60 subtypes that have various pathogenicities.