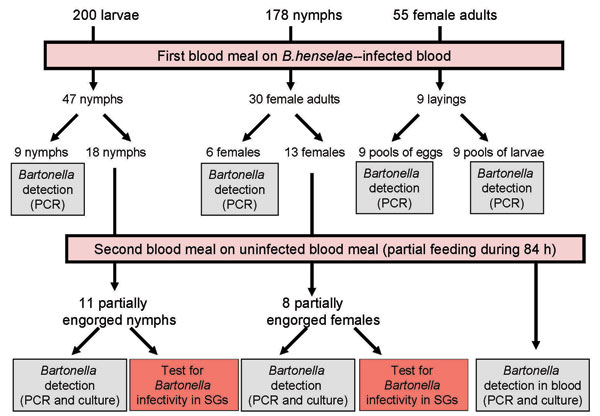 Figure 1. Experimental framework of Ixodes ricinus tick infection by Bartonella henselae–infected blood. Ticks (200 larvae, 178 nymphs, and 55 female adults) were engorged by feeding through artificial skin on B. henselae–infected blood for 5 days for larvae, 12 days for nymphs, and 21 days for adults. Larvae and nymphs were allowed to molt and engorged females were allowed to lay eggs. To evaluate transtadial and transovarial transmission, Bartonella spp. DNA was detected by PCR in salivary glands (SGs) and carcasses of 9 nymphs, 6 female adults, 9 pools of eggs, and resulting pools of larvae. Eighteen nymphs and 13 adult females fed on infected blood at preceding stages were refed for 84 h on noninfected blood. Bartonella spp. DNA was detected by PCR in SGs of 7 engorged nymphs and 3 engorged female adults. B. henselae colonies were isolated from SGs of 3 nymphs and 4 adults and from blood removed from feeders. Infectivity of B. henselae in SGs was tested by infecting 2 cats with 1 pair of SGs from a potentially infected nymph and 1 pair of SGs from a potentially infected adult, respectively.