Diversity and Origin of Dengue Virus Serotypes 1, 2, and 3, Bhutan

Dengue infections have increased worldwide in recent decades. Before 1970, only 9 countries had experienced epidemics of dengue hemorrhagic fever; by 1996, this number had increased to 102 (1). Dengue is endemic to most of Southeast Asia; high numbers of cases are reported each year in Laos, Cambodia, Vietnam, Singapore, and Thailand. Dengue was first reported in Nepal in 2004 (1). Serologic testing of a group of febrile patients in Nepal showed that 8% had immunoglobulin (Ig) M against dengue, and a recent report noted 11 serologically confirmed dengue cases in 2006 (2,3). The Armed Forces Institute of Medical Sciences (AFRIMS) in Bangkok, Thailand, recently confirmed the presence of all 4 dengue serotypes in Nepal (4). 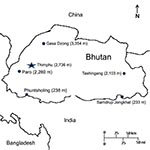 Appendix Figure. Map of Bhutan. Selected cites are indicated by enclosed circle and elevation of the city in meters in parentheses.

In another Himalayan nation, Bhutan, dengue was first suspected in the summer of 2004. Bhutan is an extremely rugged and mountainous country of 38,394 km2 with an altitude ranging from 150 m on the southern border with India to >7,000 m in the mountains bordering Tibet (Appendix Figure). The dengue outbreak resulted in 2,579 cases (5), almost all of which occurred in and around Phuntsholing district (2005 census population 20,537) in southern Bhutan on the border with India. Fifty-two serum samples from this outbreak were tested by using dengue enzyme immunoassay (EIA) at the National Institute of Communicable Diseases, New Delhi, India. Twelve (23%) samples were positive for antidengue IgM. Thirty-five (67%) of the 52 samples also were tested at Suraksha Hospital, Kolkata, India, of which 5 were positive.

Since the initial report in 2004, fewer clinical cases were reported from Bhutan in 2005 and 2006; dengue virus 3 (DENV)-3 was the dominant serotype (5). Although some serologic analysis is available, serum samples from Bhutan have not been evaluated for dengue by using molecular techniques. In particular, circulating DENV in Bhutan has not been genetically characterized, so from where and how frequently DENV is imported into Bhutan are unclear.

A total of 168 samples (53 from 2004, 19 from 2005, and 96 from 2006) were delivered to AFRIMS for confirmatory dengue testing. Samples were tested by using reverse transcription–PCR/nested PCR modified from published methods (6) and the in-house dengue IgM/IgG EIA (7). In addition, the complete envelope (E) gene was sequenced for samples that were dengue positive by PCR. Two DENV-2–positive samples from 2004 and 19 DENV-3–positive samples from 2005–2006 underwent E gene sequencing. Sequencing also was attempted on additional PCR-positive samples but was not successful because of insufficient genetic material. All dengue E gene sequences from the study have been submitted to GenBank and assigned accession nos. FJ606692–FJ606712. 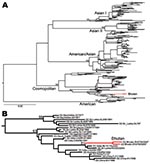 Figure 1. A) Maximum likelihood phylogenetic tree of 264 complete envelope gene sequences of dengue virus serotype 2 (DENV-2). The different genotypes of DENV-2 and the isolates from Bhutan (red) are indicated. Scale...

Figure 2. A) Maximum-likelihood phylogenetic tree of 264 complete envelope gene sequences of dengue virus serotype 3 (DENV-3). The different genotypes of DENV-3 and the isolates from Bhutan (red) are indicated. Scale bar...

Phylogenetic analysis of complete E gene sequences indicated that the 2 DENV-2 isolates sampled in 2004 fell into the Cosmopolitan genotype, which is widely distributed throughout the tropical and subtropical world (Figure 1). These viruses were closely related to those sampled in a similar period in the Indian subcontinent (India and Sri Lanka), suggesting these DENV-2 isolates were imported into Bhutan from the Indian subcontinent. A remarkably similar picture was seen for DENV-3 (Figure 2). The 19 DENV-3 isolates sampled from 2005 and 2006 clustered closely within viral genotype III, which is found in Africa, the Western Hemisphere, and the Indian subcontinent. Again, the DENV-3 phylogeny is compatible with the migration of this virus northward through India to Bhutan.

Our genetic characterization of DENV in Bhutan demonstrates that at least 3 DENV serotypes have circulated there. The E gene sequence data for the 2 DENV-2 strains from 2004 and the 19 DENV-3 strains from 2005 and 2006 indicate that the DENV strains in Bhutan are similar to those circulating regionally and thus were most likely introduced (or reintroduced) from neighboring areas. That such emergence in Bhutan has occurred only recently is further supported by the observation of more primary than secondary dengue infections for all 3 years, as well as the relatively advanced mean age of patients.

Mr Dorji is the head of the Public Health Laboratory, Department of Public Health, Ministry of Health, Bhutan, and a member of the Ethical Committee for Health Research and the coordinator for the National Task Force for Laboratory Containment of Wild Poliovirus. His current interests include eliminating iodine deficiency disorders in Bhutan, improving the public health laboratory capacity for diagnosing infectious diseases, improving quality assurance in the laboratory, and investigating and controlling outbreaks in Bhutan.

We thank the staffs of the Vectorborne Disease Control Program Public Health Laboratory and Phuntsholing Hospital, Ministry of Health, who were involved in the control of dengue in Bhutan. We also thank Chonticha Klungthong and Butsaya Thaisomboonsuk and the laboratory technicians in the Department of Virology at the Armed Forces Research Institute of Medical Sciences.

This work was funded by the US Department of State Biosecurity Engagement Program.

Diversity and Origin of Dengue Virus Serotypes 1, 2, and 3, Bhutan