An outbreak of viral encephalitis occurred in northern India in 2006. Attempts to identify an etiologic agent in cerebrospinal fluid by using reverse transcription–PCR showed positivity to enterovirus (EV) in 66 (21.6%) of 306 patients. Sequencing and phylogenetic analyses of PCR products from 59 (89.3%) of 66 specimens showed similarity with EV-89 and EV-76 sequences.

Acute viral encephalitis is caused by a wide range of viruses and can occur either in sporadic episodes or in outbreaks. Viral etiologic agents that have been identified as causing encephalitis include herpesvirus, enterovirus, alphavirus, influenza A virus, rabies virus, HIV, flavivirus, and Chandipura (CHP) virus (1,2). An outbreak of viral encephalitis was reported from April through October 2006 from predominantly Gorakhpur and 5 adjoining districts of eastern Uttar Pradesh (Maharajganj, Kushinagar, Sant Kabir Nagar, Siddharthnagar, and Deoria) and 2 adjoining districts of Bihar (Gopalganj and West Champaran), locations where Japanese encephalitis (JE) is known to be endemic in India. According to state government health services records, 1,912 cases of viral encephalitis occurred in these areas, and 411 (21.5%) patients died. From August through September 2006, we investigated 306 patients admitted with encephalitis to Baba Raghav Das Medical College in Gorakhpur, Uttar Pradesh. The patients represented all 8 districts of eastern Uttar Pradesh. ELISA and reverse transcription–PCR (RT-PCR) performed on the patients’ cerebrospinal fluid (CSF) samples identified 40 (13.1%) of 306 specimens as positive for JE virus (3). Laboratory tests were negative for alphavirus and CHP virus, and the etiologic agent in a large number of cases was unidentified.

Enteroviruses (EVs) cause a wide variety of diseases that range from nonspecific viral illness to mild infections of herpangina and hand, foot, and mouth disease to potentially serious diseases such as myopericarditis, meningitis, myelitis, and neonatal sepsis. EVs are also etiologic agents of encephalitis outbreaks in humans (4). These viruses comprise more than 90 serotypes, and most are known to cause human infections. We focused on the detection, isolation, and molecular characterization of EVs in 306 patients from eastern Uttar Pradesh.

A total of 850 specimens collected from 306 patients who had encephalitis included 306 CSF specimens, 304 blood samples, 120 throat swabs, and 120 rectal swabs. All samples were stored at –20oC before being transported for analysis and thereafter were stored at –70oC at the National Institute of Virology in Pune, India. Laboratory tests conducted by state government health services of Uttar Pradesh were negative for bacteria and malaria. According to standard protocol (2), virus isolation was attempted in human rhabdosarcoma (RD) and in baby hamster kidney (BHK) cell lines.

Separate aliquots were processed in 2 laboratories to maintain quality control and monitor possible contamination during PCR processing. Viral nucleic acids were extracted by using viral RNA mini kits (QIAamp, Qiagen, Hilden, Germany). RT-PCR was performed for EV by using 5′ noncoding region (NCR)–specific primers, as has been described (5,6). Genotyping was conducted by using RT-PCR of virion protein (VP) 1/2A and VP1 regions and sequencing (7,8). Table 1 describes the locations and sequences of the primers used in the assays.

Specimens available in sufficient quantity were inoculated into RD and BHK cell lines. Specimens that were adequate for isolation included 85 of 306 CSF specimens, 18 of 304 serum samples, 19 of 120 rectal swabs, and 19 of 120 throat swabs. Cytopathic effect was observed in cell cultures inoculated with 4 CSF specimens, 2 rectal swabs, 2 throat swabs, and 1 serum sample. Electron microscopic examination of cultures infected with 2 CSF samples showed picornavirus-like particles 25–27 nm in diameter. Attempts to detect EV RNA in the isolates and clinical specimens used nested RT-PCR in 5′ NCR. Eight of 9 cultures showed amplicons of 407 bp. Sequences of amplicons from 3 CSF specimens and 2 rectal swabs showed 97.2%–98.9% homology with EV-89 (i.e., the strain named BANoo-10359, GenBank accession no. AY697459) and 95.7%–96.9% homology with EV-76 (FRA91-10369, GenBank accession no. AY697458). Sequences from 1 isolate from a CSF specimen and 1 isolate from a rectal swab showed 100.0% homology with coxsackie virus B3 (CV-B3) strain 20. One isolate from serum showed 98.3% homology with coxsackie virus B1 (CV-B1) strain SAMP2.17. 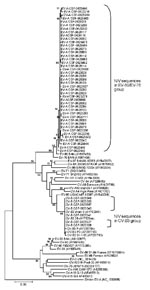 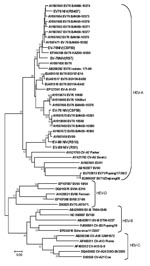 Table 2 describes details of clinical findings in the subsets of EV-positive and EV-negative specimens of the patients for whom clinical histories were available. Further, hepatomegaly and splenomegaly appeared to be proportionately higher in patients with enteroviral infections than in patients whose specimens were negative for EV and JE virus.

The viral RNA detected in CSF samples from patients hospitalized with encephalitis in Uttar Pradesh showed close identity with the EV-89 and EV-76 that recently were reported as an unusual group classified genetically as group A EV (EV-A) (10). Presence of the virus was also confirmed by its isolation and typing. Human EV-76 was detected in isolates in 1 rectal swab and 2 CSF specimens, and human EV-89 was detected in 2 rectal swabs by using amplification of VP1/2A or VP1 regions. Sequence analysis showed nt homology of 92.7%–97.7% with Bangladesh EV-76 and EV-89 strains recovered from patients with acute flaccid paralysis (AFP). The failure of amplification of typing regions in most specimens may be due to a low viral load.

EVs are known to cause severe neurologic diseases ranging from AFP to encephalitis (11). In recent years, Southeast Asian countries have reported outbreaks of encephalitis caused by EV-71 (12,13). During AFP surveillance activities, Bangladesh strains were isolated from stool specimens (14). AFP patients infected with echoviruses and coxsackie B viruses also have been detected in India (15). Isolation of EV from clinical specimens collected from children with encephalitis in the present study indicates viable virus. Detection of EV-89/76 RNA in the CSF of ≈20% of the patients suggests the association of these viruses with encephalitis. Also, in 10 (3.3%) of 306 patients, co-infections of JE virus and EV were detected. Further studies are needed to understand the relative contributions of these viruses in causing sporadic and outbreak infections of encephalitis.

Accumulation of water in a saucer-shaped landscape (terai) and extensive rice cultivation in eastern Uttar Pradesh and adjoining regions favor the growth of vector mosquito populations and waterborne pathogens. Though the source of infection in the present study is unclear, the data warrant active surveillance of encephalitis cases. Inadequate hygiene and the unsanitary conditions that prevail in the study region may encourage the spread of EV infections in the community. Studies conducted on environmental samples may provide clues related to the dynamics of EV infections in humans.

Funds were provided by the Indian Council of Medical Research, Ministry of Health and Family Welfare, Government of India.