Time from Illness Onset to Death, 1918 Influenza and Pneumococcal Pneumonia 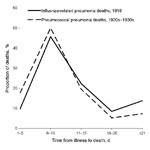 Figure. Distribution of days of illness before death from influenza-related pneumonia, 1918, and from untreated pneumococcal pneumonia, 1920s and 1930s.

Time from Illness Onset to Death, 1918 Influenza and Pneumococcal Pneumonia