Until 2002, all Salmonella isolates worldwide with reduced ciprofloxacin susceptibility were uniformly resistant to nalidixic acid (3–5); i.e., they exhibited the conventional quinolone resistance phenotype. In 2003, we identified Salmonella isolates that showed reduced susceptibility to ciprofloxacin but were either susceptible (MIC <32 µg/mL) or only low-level resistant (MIC = 32 µg/mL) to nalidixic acid. All Salmonella isolates with this nonclassical quinolone resistance phenotype were from travelers returning from Thailand or Malaysia (6). We undertook this study to survey the recent incidence of reduced fluoroquinolone susceptibility among nontyphoidal strains of S. enterica acquired by Finnish travelers abroad and to define the epidemiology of the nonclassical quinolone-resistant Salmonella population.

Our study included 499 S. enterica isolates collected during 2003–2007 from Finnish travelers returning from abroad; due to a technical error, in 2004 only 99 foreign Salmonella isolates were sent to us from the National Salmonella Reference Center. The first 100 foreign Salmonella isolates identified during January of each year were collected. An isolate was designated to be of foreign origin if the patient had reported travel abroad during the month before the specimen was obtained. Epidemiologic information regarding travel destination was collected from the forms accompanying each isolate.

MICs of ciprofloxacin and nalidixic acid for the isolates were determined by using plate agar dilution (7). The MIC breakpoint value for reduced ciprofloxacin susceptibility was chosen as >0.125 µg/mL on the basis of earlier publications (4,5,8). The breakpoints for nalidixic acid were 16 µg/mL for susceptibility and 32 µg/mL for resistance, according to Clinical and Laboratory Standards Institute guidelines (7).

Data concerning the number of travelers from Finland to countries of interest (i.e., countries with Salmonella isolates showing reduced fluoroquinolone susceptibility) during the study months were received from Statistics Finland (www.stat.fi). Susceptibility data were analyzed by using WHONET5.4. For statistical analyses, we summarized data on the basis of the number and proportion of Salmonella isolates with reduced fluoroquinolone susceptibiity. The trend over years was analyzed using a logistic regression model with year as a covariate; p<0.05 was considered significant. Statistical analyses were performed using SAS for Windows version 9.1.3 (SAS Institute Inc., Cary, NC, USA). 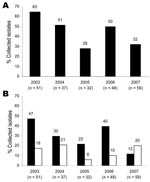 The 499 Salmonella isolates in this study were collected from travelers returning from 43 different countries; isolates with reduced ciprofloxacin susceptibility were collected from travelers returning from 18 countries (Table). All 36 isolates showing the nonclassical resistance phenotype were from Thailand or Malaysia; 47% of the isolates showing the conventional quinolone resistance phenotype were from these 2 countries.

Figure 2. Dendrogram showing the clonal relationships among 36 isolates of Salmonella enterica collected from travelers returning to Finland from Thailand or Malaysia, 2003–2007. These isolates showed the nonclassical quinolone resistance phenotype (i.e.,...

The nonclassical quinolone resistance phenotype was found in 7 different serovars, of which S. enterica serovar Corvallis and S. enterica serovar Stanley were the most prevalent; among the conventional quinolone resistance phenotype, S. enteritidis and S. virchow were the most prevalent. The 36 isolates belonging to the nonclassical phenotype were distinguished by PFGE to 16 different PFGE patterns (Figure 2).

Reduced fluoroquinolone susceptibility among nontyphoidal strains of S. enterica among travelers from Finland, as a whole, decreased significantly during the study period, 2003–2007 after having constantly increased for several years (3,4). The significant decrease (p = 0.029) from 2003 to 2007 was driven by isolates from Southeast Asia; the proportion of resistant strains from the other travel destinations remained fairly stable. Notably, this recent decreasing trend in resistance was not linked with reduced travel to Thailand, as the number of tourists from Finland going to Thailand more than doubled from 2005 to 2007 (Table).

In addition, after the emergence of the nonclassical quinolone resistance phenotype among S. enterica in Thailand and Malaysia, these isolates have persisted in that area. Our study shows a minor variation in the proportion of this resistance phenotype among the whole quinolone-resistant population. For example, in 2005 the proportion of the nonclassical phenotype isolates was only 6%, but in that year, the proportion of all isolates with reduced ciprofloxacin susceptibility was small. This result is most likely due to the collection of the foreign isolates soon after the tsunami catastrophe in December 2004; travelers from Finland took >20% fewer trips to Thailand in 2005 than in 2004 (Table).

The nonclassical quinolone-resistant population may prove hard to identify in those microbiological laboratories that use only nalidixic acid to screen for reduced fluoroquinolone susceptibility in salmonella isolates. It is to be expected that this screening approach may fail due to susceptibility or only low-level resistance to nalidixic acid in these isolates (10–12). Isolates collected from travelers returning from Thailand or Malaysia should especially be examined for fluoroquinolone susceptibility because nalidixic acid screening test results may no longer be predictive of fluoroquinolone resistance. At the present time, the nonclassical phenotype appears to be mainly confined to Thailand and Malaysia (10,11), but given the continuous increase in global travel, these isolates may emerge in other parts of the world.

Ms Lindgren is a doctoral candidate at the Antimicrobial Research Laboratory, National Institute of Health and Welfare, Turku, Finland. Her primary research interest is focused on antimicrobial resistance of enteric pathogens.

This work has been financially supported by the Turku University Central Hospital Research Fund.