Genome sequencing and virulence studies of 2 Japanese encephalitis viruses (JEVs) from bats in Yunnan, China, showed a close relationship with JEVs isolated from mosquitoes and humans in the same region over 2 decades. These results indicate that bats may play a role in human Japanese encephalitis outbreaks in this region.

Bats have been increasingly recognized as an important source of zoonotic viruses responsible for some of the recent major disease outbreaks, including Hendra, Nipah, severe acute respiratory syndrome–associated, and Ebola viruses (1). Japanese encephalitis virus (JEV) is a member of the family Flaviviridae and the genus Flavivirus (2) and is the etiologic agent of severe encephalitic diseases in humans. In addition to humans, JEV has been isolated from various hosts, e.g., mosquitoes, birds, pigs, and horses (3,4). The role of bats in JEV epidemiology has been poorly defined, although the virus has been isolated from bats of various species since 1963 in multiple locations (5,6). To date, no nucleotide sequence information has been available for bat JEV isolates.

Yunnan Province, in southern China, has a tropical to subtropical climate and a diverse biota. The annual case rate of Japanese encephalitis in Yunnan is >2× the average case rate of the whole country (7). We report the molecular and virulence characterization of 2 bat JEV isolates from Yunnan: B58, obtained from a Leschenault’s rousette (Rousettus leschenaultia), a fruit bat, in 1989; and GB30, obtained from a little tube-nosed bat (Murina aurata), an insectivore, in 1997.

The viruses used in this study were isolated from homogenates of the brains of bats by direct intracranial (i.c.) inoculation of 3-day-old suckling mice. Although isolate B58 was obtained in 1989, no further identification or characterization was conducted until this study. GB30 was identified as JEV by serologic analysis (8). Inoculation in suckling mice was conducted following procedures approved by the Animal Ethics Committee of the Institute for Viral Disease Control and Prevention, China. Mice were observed 2× per day after inoculation, and every 2 hours after the onset of clinical signs. After euthanasia, supernatant from brain homogenate was used to inoculate C6/36 cells. After the appearance of cytopathic effect (CPE), supernatant was harvested and passaged 3 more times. Virus stock was prepared from the previous passage and stored at –85oC.

Neurovirulence of the 2 bat JEV strains and of a mosquito-derived JEV strain, M10 (9), were determined. All viruses were consecutively passed 3 times in mice, and virus suspension (defined as the 10–1 stock) was prepared from the third passage. For determination of a 50% lethal dose (LD50), suckling mice (5 per group) were inoculated i.c. with dilutions from 10–1 to 10–9. Animals were monitored daily for survival, and the LD50 values were calculated by using a standard method (10).

For initial studies, suckling mice were inoculated i.c. with the supernatant of clarified brain homogenate. The 2 groups (n = 8 for each) inoculated with B58 and GB30, respectively, displayed clinical signs after 42 h postinoculation (hpi), whereas the control group with buffer only (n = 8) displayed no clinical signs. Clinical signs included refusing sucking, no interest in grouping, neck rigidity, tremors and muscular spasms, ataxia, and hind-limb paralysis. All mice had to be euthanized from 70 to 78 hpi. The supernatant of brain homogenate was used to inoculate C6/36 cells, and CPE was visible at ≈96 hpi for the first passage and at 72 hpi for second and third passages.

The identity of B58 as JEV was confirmed by PCR sequencing. The complete genome sequence of both isolates was then determined. The 2 genomes have identical size at 10,977 nt with a 95-nt 5′ nontranslated region (NTR) and a 583-nt 3′ NTR. The single open reading frame codes for a polyprotein of 3,432 aa. The genomes have similar guanine-cytosine content (51.44% for B58 and 51.39% for GB30). 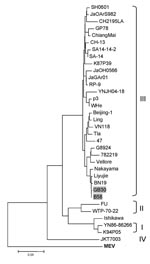 Phylogenetic trees derived from nucleotide sequences of the complete genome or the most variable envelope protein gene of selected JEV strains (Table 1) indicated that both JEV isolates from bats are members of genotype III as defined by Solomon et al. (3). A more detailed analysis indicated that the bat JEVs are most closely related to human isolate LiYujie and mosquito isolate BN19 within cluster 6 (Figure). Similar phylogenetic trees were obtained based on other gene sequences, such as PrM (data not shown).

In this study, we analyzed the complete genome sequences of 2 bat JEV isolates. Although previous serologic studies (15) have indicated the occurrence of JEV in a Leschenault’s rousette, we demonstrate JEV infection of Marina aurata bats, confirming that the same JEV genotype can infect bats of many species. Both bats are commonly present in Yunnan Province and other parts of China. The bats tend to roost in trees, caves, and roofs of residential properties in close proximity to rice paddocks and pig pens, providing ample opportunity for cross-species transmission among bats and between bats and other animals. Notably, the 2 JEV strains most closely related to the bat viruses were all isolated from Yunnan Province, LiYujie from a human in 1979 and BN19 from mosquitoes in 1982 (Figure).

Our study indicates that the same virus is circulating in hosts of at least 4 different species (human, mosquito, and 2 different bat species), and likely in birds as well, highlighting the broad host range of JEVs in this area. We emphasize that the 4 closely related strains (B58, GB30, LiYujie, and BN19) were isolated over 2 decades, which suggests that the virus was stably maintained in the region, perhaps by circulating in disparate hosts. The findings from our current study highlight the potential importance of bats in human JE outbreaks in the region. Needed additional studies of JEV in bats should include the determination of viremia in bats of different species and potential seasonal variation of viral loads among different bats at different geographic locations. This data would provide a better assessment of risks posed by JEV in bats.