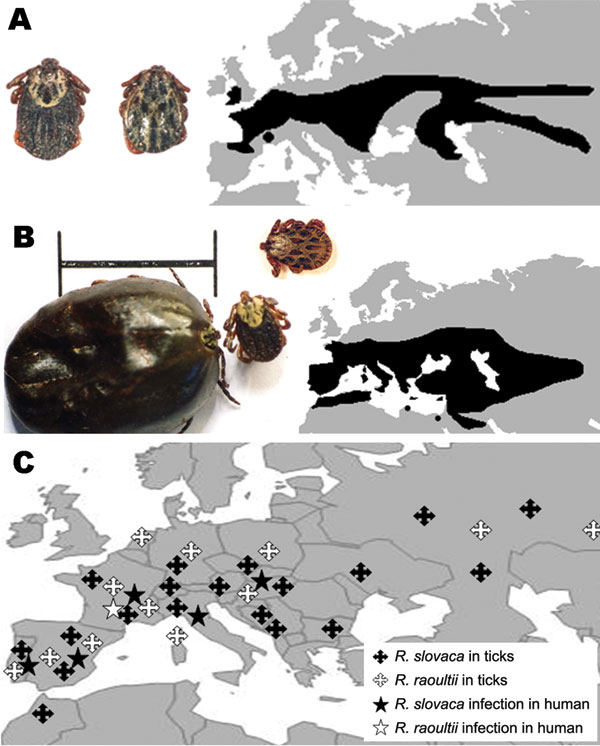 Figure 1. Dermacentor reticulatus, the ornate dog tick (A) (female, left; male, right), and D. marginatus, the ornate sheep tick (B) (engorged female, left; unfed female, center; male, right; scale bar = 1 cm), and their distribution. D. marginatus is most frequently found in Mediterranean areas of Europe with dense bush and tree cover and is common under oak and pine vegetation. It also has a restricted distribution in North Africa, in the cooler and more humid areas associated with the Atlas Mountains. Adults infest large mammals such as sheep, cattle, goats, and wild boars. Larvae and nymphs feed mostly on small mammals and medium sized carnivores. D. reticulatus is most frequently found in colder northern areas of western Europe and the former Soviet Union, with high humidity and mild winters. D. reticulatus is primarily a tick of dogs and carnivores, but it can be found on ungulates such as sheep, cattle, and horses (9). D. marginatus and D. reticulatus have been suggested as reservoirs of R. slovaca and R. raoultii, which are maintained in ticks through transstadial and transovarial transmission. Therefore, the geographic distribution of these rickettsiae likely parallels that of Dermacentor ticks (C).