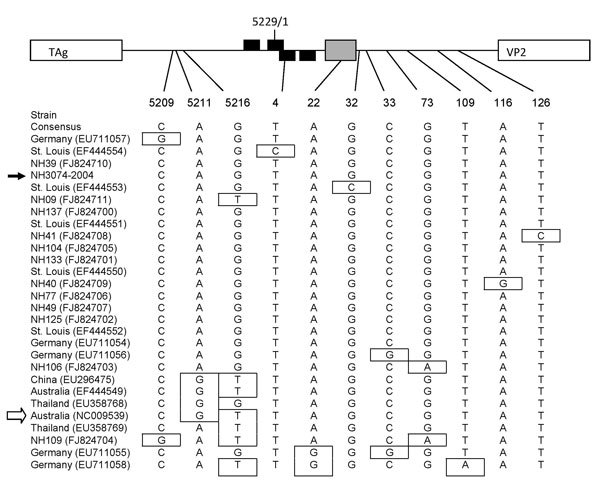 Figure. Nucleotide polymorphisms in the noncoding region of WU polyomavirus (WUPyV), Connecticut, USA, 2007. Sequences spanning nt 5197 to 159 of the circular viral genome of New Haven human serum isolates and all available sequences from GenBank (all from respiratory specimens) were subjected to phylogenetic analysis. A map of the noncoding region within the viral genome is indicated at the top of the figure (not to scale). The arbitrary last (5229) and first (1) nucleotide of the circular viral genome are indicated. The putative large T antigen (TAg) binding sites for each strand of the double-strand genome are indicated by black boxes, and the A/T-rich region is indicated by a gray box. Position of nucleotide polymorphism is indicated below the map. Strains (location and GenBank accession nos.) are listed in order according to phylogenic analysis. The consensus sequence is listed first, and polymorphisms are indicated by boxes. The strain indicated by the black arrow is a WUPyV New Haven respiratory isolate (6), and the strain indicated by the white arrow is the original WUPyV isolate (2). VP2, virus capsid protein 2.