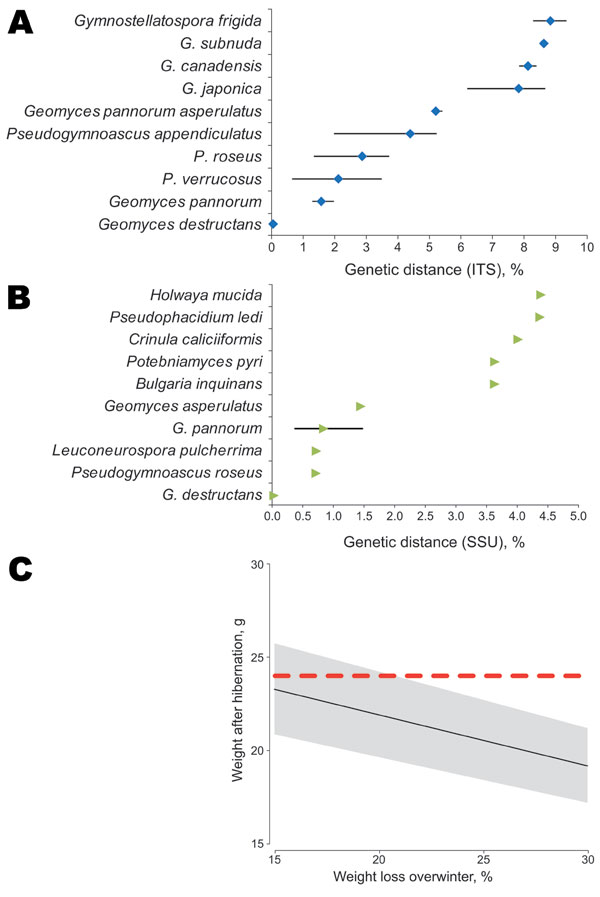 Figure 2. Genetic distance between fungus A) internal transcribed spacer (ITS) (474 nt) and B) small subunit (SSU) rRNA (1,865 nt) gene sequences and other closely related fungus species present in GenBank. Results are based on pairwise sequence comparisons with gaps and missing data removed. Error bars in panels A and B indicate mean ± SD. C) Estimation of weight of Myotis myotis bats after hibernation as a function of the range of percentage of weight loss reported. Posthibernation of a bat’s weight was estimated from prehibernation measured weights (n = 155 bats) minus winter fat loss. A strong positive relationship exists between body mass and fat mass during prehibernation (8). Fat reserves between 15% and 30% of body mass at the onset of hibernation have been reported to be necessary for Myotis species to survive winter (9). The posthibernation weight (Wpost) was thus estimated as Wpost = Wpre – (Wpre × Wloss/100), where Wpre is prehibernation weight and Wloss is percentage of body mass lost during hibernation. Mean ± SD prehibernation weight of 155 bats captured in France during August–October 2009 (27.42 ± 2.87 g) was used for the estimate. Black line represents the mean, gray area represents the mean ± SD, and red dashed line represents the 24-g weight of the bat caught in France with white-nose syndrome posthibernation. The bat was in good condition (24 g) because it weighed more than the expected average for a posthibernating bat despite having Geomyces destructans growth on its snout.