White-nose syndrome is caused by the fungus Geomyces destructans and is responsible for the deaths of >1,000,000 bats since 2006. This disease and fungus had been restricted to the northeastern United States. We detected this fungus in a bat in France and assessed the implications of this finding.

Biologists are struggling to understand a recent emerging infectious disease, white-nose syndrome (WNS) (1), which potentially threatens >20% of all mammalian diversity (bats) (2). WNS is a deadly epidemic that has swept through the northeastern United States over the past 3 years and caused the death of >1,000,000 bats, with decreases of ≈100% in some populations (3).

This disease is associated with hibernating, cave-roosting bats. A visually conspicuous white fungus grows on the face, ears, or wings of stricken bats; infiltration of the hyphae into membranes and tissues leads to severe damage (4). Bats that exhibit WNS have little or no fat reserves, which are essential for their survival throughout and after hibernation (5). The fungus associated with WNS is a newly described, psychrophilic (cold-loving) species (Geomyces destructans) (6). It is closely related to G. pannorum, which causes skin infections in humans (7).

Although it is not known whether the fungus is primarily responsible for deaths of bats or is a secondary infection, it is directly associated with deaths of bats (5). Bacteriologic, virologic, parasitologic, and postmortem evaluations for the cause of death did not identify any other agents, which reinforces the suspicion that this fungus is the causative agent (4,5). To date, WNS has been found only in the northeastern United States. However, researchers have suggested its presence in Europe. We investigated whether G. destructans is present in bats in Europe and assessed the implications of its presence.

Figure 1. A) Myotis myotis bat found in a cave on March 12, 2009, in France, showing white fungal growth on its nose (arrow). B) Fungus colony on malt extract medium after incubation...

During intensive monitoring of bat hibernation in France, 1 bat (Myotis myotis) found on March 12, 2009, near Périgueux (45°8′N, 0°44′E), showed a powdery, white fungal growth on its nose (Figure 1, panel A), which is characteristic of WNS. Sterile dry cotton swabs were used to collect fungus material from the nose of the bat. The bat was then weighed, measured, and released. Swabs were moistened with 50 μL of sterile water and streaked onto plates containing potato dextrose agar supplemented with 0.1% mycologic peptone. Plates (9 cm in diameter) were sealed with parafilm and incubated inverted at 10°C. A dense fungus growth developed within 14 days (Figure 1, panel B).

Cultures were established by transferring inoculum to other mycologic media, including malt extract agar and Sabouraud agar. Colonies on malt extract agar were initially white but after spore production and aging they quickly darkened from the center to a dull gray, often showing a faint green hue. Spores were hyaline, irregularly curved, broadly crescent-shaped (typically 6–8 μm long and 3–4 μm wide), and narrowed at each end, one of which was broadly truncate, often showing an annular frill (Figure 1, panel C). Fungal cultures have been deposited in the culture collection of the Industrial Microbiology Department of University College Dublin (Reference IMD Z2053).

Microscopic examination of the original swab samples showed numerous spores with the above-mentioned features. The psychrophilic nature of the fungus and its species-specific morphologic features (Technical Appendix) led to the conclusion that this fungus was G. destructans, which was recently isolated from WNS-positive bats in the northeastern United States (6).

Two molecular markers were sequenced from 6 randomly chosen fungus cultures to confirm species identity. DNA was extracted by using a Blood and Tissue Kit (QIAGEN, Hilden, Germany) following the manufacturer’s instructions with slight modifications (after step 3, we added an incubation time of 10 min at 70°C). The internal transcribed spacer (ITS) regions (ITS1, 5.8S, and ITS2) and the small subunit (SSU) of the rRNA gene were amplified separately. 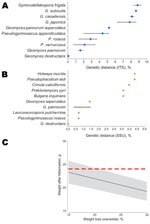 The ITS and SSU sequences from the 6 WNS fungus cultures were identical. They were deposited in GenBank as single sequences: ITS (GQ489024) and SSU (GQ489025). Sequences obtained for the 2 genetic markers showed a 100% sequence identity with the described G. destructans fungus (Figure 2, panels A, B). Thus, morphologic and genetic data support the presence of G. destructans infection in a bat in France.

Our results show that the WNS fungus was present in a bat in France and has implications for WNS research, bat conservation, and emerging infectious disease control. We suggest 3 possible scenarios for our findings. The first scenario is that the fungus has only recently arrived in Europe and all bats in Europe are now at risk for infection. Thus, conservation steps must be taken to minimize the spread of this disease, especially because this disease is specific for hibernating bats. After the hibernation period, M. myotis bats may migrate up to 436 km to reach their summer roosts (10), a behavior that could quickly increase the chance of fungus transmission. A second scenario is that the fungus has been present in Europe for a long time. Because mass deaths have not been observed in bats in Europe, these bats may be immune to WNS. Therefore, identification of mechanisms of this immunity will advance understanding of this disease and fungus resistance in mammals. The third scenario is that the G. destructans fungus is not the primary cause of death but acts as an opportunistic pathogen in bats already immunocompromised by other pathogens such as viruses or bacteria (1). Comparison of pathogens in bats in Europe and the United States infected with G. destructans should identify the primary causative agent.

The bat in our study showing fungal growth was not underweight (Figure 2, panel C), as is typical of bats in the United States with WNS (4). This finding favors the second or third scenarios. Also, a 6-year (2004–2009) annual monitoring program of wintering bat populations at the site and 5 sites within a 2-km radius did not show any cases of WNS or deaths and showed stable bat populations. The 3 scenarios indicate that studying G. destructans in bats in Europe and the United States is necessary to understand and control this disease.

Another fungus, Batrachochytrium dendrobatidis, is the etiologic agent responsible for chytridiomycosis (11), which currently threatens >50% of all amphibian species and is primarily responsible for the global decrease and extinction of >200 amphibian species in the past decade (12). Because bats account for >20% of mammalian diversity (2) and play major roles in ecosystem functions, we need to understand, monitor, and control the progression of WNS. Otherwise, we may be faced with similar unprecedented and irreversible losses of mammalian biodiversity and entire ecosystems. Because bats control insect populations throughout the world (13–15), a large decrease in bat populations would result in insect proliferations that would damage agricultural crops and spread many insect-borne diseases.

Dr Puechmaille is a postdoctoral fellow at the School of Biology and Environmental Science at University College Dublin. His research interests focus on evolution, speciation, ecology, and conservation with an emphasis on bats.

This study was supported by a grant from The President of Ireland Young Researcher Award Science Foundation Ireland to E.C.T.