In Brazil, Brazilian spotted fever was once considered the only tick-borne rickettsial disease. We report eschar-associated rickettsial disease that occurred after a tick bite. The etiologic agent is most related to Rickettsia parkeri, R. africae, and R. sibirica and probably widely distributed from São Paulo to Bahia in the Atlantic Forest.

Brazilian spotted fever (BSF), caused by Rickettsia rickettsii, was at one time considered the only tick-borne rickettsial disease in Brazil (1). Its transmission in 5 southern states is primarily associated with Amblyomma cajennense, A. aureolatum, and Rhipicephalus sanguineus ticks; however, many other rickettsiae of unknown pathogenicity are carried by ticks in Brazil (1,2). We describe an eschar-associated rickettsiosis in a traveler from the state of Bahia, Brazil; this disease seems to have been caused by the same Rickettsia sp. that caused a similar disease in São Paulo in 2009 (3).

In April 2007, a 30-year-old man from Bahia sought care for a 6-day febrile illness that began 9 days after he found a tick attached to his right wrist while hiking and camping in the Chapada Diamantina National Park in Paty Valley (12°48′26′′S, 41°19′53′′W), a semiarid region in Bahia. Primary signs and symptoms were fever (39–40°C), severe myalgia, and swelling and pain at the site of the tick bite. Two days after onset of illness, the man noticed a scab forming on his right wrist and painful swelling in his right axillary region, followed 2 days later by a generalized rash and painful ulcerative lesions in the mouth. The patient sought medical care, and an outpatient physician prescribed acetaminophen and cefadroxil, which did not reduce symptoms.

Figure 1. Lesions on day 6 of illness of patient with eschar-associated rickettsial disease, Bahia, Brazil, 2007. A) Eschar on right wrist; B) papular skin rash on left elbow; C) ulcerated lesion on...

On day 6 of his illness, the patient sought care from an infectious disease specialist, who noted a 2.5-cm eschar on the patient’s wrist (Figure 1, panel A); disseminated papular rash on his face, trunk, and upper extremities (Figure 1, panel B); and several small erosions on his tongue, buccal mucosa, and lips (Figure 1, panels C, D). The mucosal erosions were painful, and some skin papules formed small pustules (Figure 1, panel E). In the right axilla was a tender, enlarged, 3-cm lymph node. Results of a hemogram and blood biochemistry were unremarkable except for a high level (425 U/L) of lactic dehydrogenase. A rickettsial disease was considered, and the patient was given doxycycline (100 mg 2×/d) for 14 days. The fever and generalized rash resolved within 2 days, and the eschar healed completely within 2 weeks after initiation of therapy.

Acute-phase and convalescent-phase serum samples were evaluated by microimmunofluorescence assay for antibodies to spotted fever group rickettsiae (SFGR) (4). Before antimicrobial drug therapy was started, biopsy specimens of the papule and the scab from the eschar were collected, preserved in 10% formol, and evaluated by routine histopathology, immunohistochemical staining, and PCR (4,5). 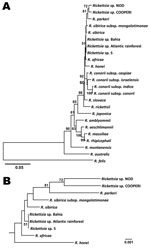 During the past decade, many newly identified tick-borne rickettsiae from South America have been described (1,2), including R. parkeri, R. massiliae, R. amblyommii, R. bellii, and other Rickettsia spp. of unknown pathogenicity. We describe another confirmed case of a novel eschar-associated SFGR disease in Brazil.

Development of an eschar is a characteristic manifestation of rickettsioses caused by R. parkeri, 364D Rickettsia, and R. massiliae (4,7). Possible eschar formation in association with Rocky Mountain spotted fever has been reported (8), but this manifestation does not seem to be a hallmark of disease caused by R. rickettsii or of other rickettsioses in Brazil and South America (2). BSF has been most often confirmed solely by serologic testing; however, atypical clinical manifestations, including eschar formation and lymphadenopathy, have been described (9–­­­12). Lymphadenopathy and ulcers on the oral mucosa, as found for this patient, have been found in patients with rickettsiosis caused by R. parkeri and African tick bite fever (caused by R. africae) (4,13) but not in the index case-patient from São Paulo (3), who seemed to have less severe clinical manifestations than the patient described in this report.

In the scientific literature from Brazil, the earliest reference to an eschar in a suspected case of BSF was in 1932 (12). Subsequent eschar-associated cases have been identified in regions where BSF is endemic (e.g., the states of Minas Gerais, Rio de Janeiro, and Espirito Santo) (9–11) and in regions where it is not endemic (e.g., states of Santa Catarina, situated along the Argentina border, and Bahia [14], where the case reported in this article occurred). Furthermore, clinical descriptions of eschar-associated rickettsioses in Brazil have been reported from BSF-endemic areas with large populations of A. dubitatum ticks but no known A. triste ticks, which are recognized vectors of R. parkeri in southern Brazil (15). Although A. dubitatum, a human biting tick that is highly prevalent in many BSF-endemic areas (2), is a potential candidate for transmission of R. parkeri to humans in Brazil, this tick species and its vertebrate hosts, capybaras, have not yet been described in the Paty Valley, Bahia, where the patient acquired the rickettsial infection. Unfortunately, the ticks causing both cases in São Paulo and Bahia were not available for identification.

The taxonomic status of the etiologic agent of this novel rickettsiosis in Brazil cannot be definitively determined until it is isolated. On the basis of the available genetic information presented here and elsewhere (3), the pathogen detected in the cutaneous lesion of the patients from Bahia and São Paulo is equally distant from R. africae, R. parkeri, and R. sibirica. Each of these 3 SFGR is among species long accepted by International Committee of Systematics of Prokaryotes, and this status is consistent with their long evolutionary divergence and differences in their vectors and geographic distributions. Molecular confirmation can and must therefore be used to identify new rickettsial agents because they cannot be identified by clinical case presentations or serologic analyses. Additional efforts will be required to establish the full genetic diversity and range of tick and animal reservoirs of SFGR in Brazil and to determine the prevalence and clinical presentations of different rickettsioses in humans. Clinicians should be alert for tick-borne infectious diseases resulting from ecotourism activities, especially in parks and ecologic reserves in the areas of the Atlantic Forest and other areas of Brazil where many rickettsiae-infected ticks have been identified and most BSF cases have been reported.

Since submission of this article, recent investigation in Brazil has identified A. ovale ticks as potential vectors for the spotted fever group Rickettsia sp. described here (16).

Dr Silva is an infectious disease physician at the Medicine and Public Health School of Bahia, Salvador, Brazil. Her research interests focus on infections caused by obligate intracellular parasites.