Prion diseases, or transmissible spongiform encephalopathies (TSEs), are neurodegenerative disorders that include Creutzfeldt-Jakob disease (CJD) in humans, scrapie in sheep and goats, and bovine spongiform encephalopathy (BSE) in cattle. TSEs are characterized by accumulation of an abnormal isoform of the host-encoded prion protein (PrPC), termed PrPSc.

A novel human prion disease, variant CJD, was reported in 1995 and postulated to be caused by eating beef infected with BSE. Biologic and molecular analyses provided evidence that the same agent was involved in BSE and variant CJD (1,2). Evidence of sheep and goat susceptibility to BSE (3) and discovery of natural BSE infections in 2 goats (4,5) prompted the European Commission to increase the search for BSE infections in small ruminants. Although the BSE agent can be recognized by biologic strain typing in conventional mice (2), large-scale testing of small ruminants required molecular tests able to discriminate BSE from the most common TSEs of small ruminants.

Molecular criteria used to discriminate BSE from scrapie are based on the low molecular weight of proteinase K–treated PrPSc (PrPres) (6–8), a high proportion of the diglycosylated PrPSc (1,6,8), and poor or absent binding with antibodies directed at N-terminal epitopes (8–10). This last characteristic was fundamental in developing the discriminatory methods currently approved for surveillance in Europe (11).

The experimental scrapie isolate CH1641 reportedly shares molecular features with experimental sheep BSE (7), although lack of transmissibility of CH1641 to conventional mice in comparison to successful transmission of BSE provided evidence that CH1641 and BSE are caused by distinct prion agents. A few natural isolates have been described in sheep, showing molecular (10,12) and biologic (13) similarities to CH1641, and were named CH1641-like. Subtle pathologic differences were exploited to distinguish these CH1641-like isolates from BSE by immunohistochemical (5,10) and biochemical analyses by glycoform profiling (8,10). However, routine testing by using discriminatory Western blot (WB) methods does not easily distinguish CH1641 and CH1641-like isolates from BSE (8,12). We report 2 new CH1641-like isolates; analyze the conformational stability of CH1641-like isolates, BSE, and classical scrapie; and show that a reliable molecular differentiation of these 3 TSE sources is possible by an improved discriminatory WB method.

Because the discriminatory methods based on differential PrPSc N-terminal proteinase K (PK) cleavage (11) do not enable a clear-cut discrimination of CH1641-like from BSE (12), we investigated the potential of denaturation with GdnHCl as a further discriminatory strategy within the framework of the Istituto Superiore di Sanità discriminatory WB (11). To this aim, samples were untreated or treated with 3.5 mol/L GdnHCl before PK digestion and WB analysis with SAF84 and P4 monoclonal antibodies (Figure 1). This method was set up by analyzing representative scrapie, BSE, and CH1641 samples (Figure 1). As expected, BSE and CH1641 were poorly detected by P4, in contrast to classical scrapie. Treatment with 3.5 M GdnHCl, however, nearly abolished PK resistance of PrPSc from classical scrapie and CH1641, but not from sheep BSE, thus also enabling discrimination of CH1641 from BSE. 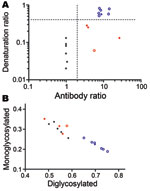 Figure 2. A) Scattergraph of antibody ratio and denaturation ratio obtained from each sample in Table 2, showing discrimination of scrapie, CH1641, CH1641-like, and bovine spongiform encephalopathy (BSE) samples. The...

Glycoform profiles, i.e., the relative proportion of diglycosylated, monoglycosylated, and unglycosylated PrPres fragments, have also been reported as a discriminatory criterion for the identification of BSE in sheep (8–10), as well as when compared with CH1641 (8,10). With the Istituto Superiore di Sanità WB method (Figure 2, panel B), field scrapie isolates, including CH1641-like isolates, were characterized by a lower diglycosylated-to-monoglycosylated glycoform ratio (0.48:0.35–0.58:0.25) than sheep BSE (0.65:0.25–0.75:0.19) and the natural goat BSE (0.70:0.22).

Because the analysis of PrPSc from sheep prion isolates by CSSA showed an extremely high conformational stability of BSE samples, we improved the Istituto Superiore di Sanità discriminatory WB by including a pretreatment of brain homogenates with GdnHCl. Our results show that the combined use of 2 independent molecular features, N-terminal cleavage by PK and resistance to denaturation, could indeed differentiate classical scrapie and CH1641-like isolates from small ruminant BSE. Nonetheless, we observed some variability among the CH1641-like samples, either when analyzed by CSSA (Table 1) or by the discriminatory WB. As previously reported (12), the antibody ratios of some CH1641-like samples were close to the cutoff (Figure 2, panel A). Furthermore, the variable conformational stability observed by CSSA was also reflected in the denaturation ratios measured by discriminatory WB, with 2 CH1641-like samples showing a relatively higher resistance to GdnHCl than to all other scrapie samples. Because of the limited number of CH1641-like isolates, further studies are needed to evaluate their effective range of variability.

This variability may be disappointing for discriminatory purposes, but it may also hinder the possible presence of subtle PrPSc conformational (and possibly strain) variants in CH1641-like isolates. The biologic similarities of CH1641-like samples after transmission to ovine transgenic mice (13) and voles (U. Agrimi, unpub. data) were worth noting. Nevertheless, CH1641-like isolates induced a certain degree of PrPSc molecular variability in both rodent models (13; U. Agrimi, unpub. data), which might be related to the molecular variability in PrPSc extracted from sheep brain.

Although based on a limited set of samples, our study supports the notion that CH1641-like isolates can be convincingly discriminated from small ruminant BSE on molecular grounds. Furthermore, the high conformational stability of BSE, when compared with that in classical scrapie, Nor98, and CH1641-like isolates, suggests the potential of the new discriminatory WB here proposed for discriminating BSE from other known small ruminant TSEs.

Ms Pirisinu is a PhD student in the Department of Veterinary Public Health and Food Safety at the Istituto Superiore di Sanità, Rome. Her research focuses on the molecular characterization of TSE strains in their natural hosts and in experimental animal models.

This research was supported by grants from the European Union (Neuroprion Network of Excellence CT-2004–506579) and the Italian Ministry of Health.