A case of human intraocular dirofilariasis is reported from northern Brazil. The nematode was morphologically and phylogenetically related to Dirofilaria immitis but distinct from reference sequences, including those of D. immitis infesting dogs in the same area. A zoonotic Dirofilaria species infesting wild mammals in Brazil and its implications are discussed.

Zoonotic filariases are caused by nematodes of the superfamily Filarioidea and are transmitted by blood-feeding arthropods. Within this taxonomic group, nematodes of the genus Dirofilaria are among the most common agents infecting humans (1–5). The 2 main species of zoonotic concern are Dirofilaria immitis, which causes canine cardiopulmonary disease, and D. repens, which is usually found in subcutaneous tissues. In addition, zoonotic subcutaneous infections with D. tenuis in raccoons and D. ursi in bears have been reported less frequently in North America (3). Dirofilaria spp. infections in humans have been detected mostly in subcutaneous tissue and lungs (3), and 1 intraocular case of infection with D. repens was reported from Russia (1). D. immitis and D. repens are the main causes of human dirofilariasis in the Americas (4,6) and Old World (2,5), respectively.

Morphologic identification of Dirofilaria spp. is based on the body cuticle, which is smooth in D. immitis (subgenus Dirofilaria) and has external longitudinal ridges in D. repens and other species of the subgenus Nochtiella. However, in many reported cases of zoonotic dirofilariasis, specific identification was not adequately addressed (5). Twenty-eight cases of human dirofilariasis in the Old World attributed to D. immitis have been reviewed recently and attributed to D. repens (5). On the basis of this information, the suggestion was made that D. immitis populations have different infective capabilities for humans in the Old and New Worlds (5). However, this hypothesis was not supported by recent genetic comparisons of specimens from the Old World (Italy and Japan) and New World (United States and Cuba) (7; M. Casiraghi, unpub. data).

Figure 1. Corneal edema and episcleral hyperemia in the left eye of a 16-year-old boy from Brazil and a free-swimming filarid in the anterior chamber. A) Macroscopic view. B) Five pairs of ovoid...

On September 16, 2008, a 16-year-old boy came to the Clínica de Olhos do Pará in Pará, Brazil, with low visual acuity (0.54 m), an intraocular pressure of 44 mm Hg, and pain in the left eye. Ophthalmologic examination showed a nematode (Appendix Video) in the anterior chamber of the left eye. The patient reported no travel history in recent months preceding the onset of symptoms. Corneal edema (Figure 1, panel A) and episcleral hyperemia in the left eye were observed, and surgery for removal of the nematode was recommended. After peribulbar anesthesia, the eye was clipped and the cornea was incised with a crescent Beaver corneal knife, and the nematode was extracted with forceps and Fukasacu hook (Appendix Video). A live filarial nematode was removed from the anterior eye chamber. The patient recovered without complications after surgery.

The parasite (deposited at the Muséum National d’Histoire Naturelle, Parasitologie Comparée, Paris, France; accession no. 143 YU) was a male filarial nematode (length 106 mm, width 400 µm). It had large caudal alae, several pairs of pedunculated papillae (Figure 1, panel B), unequal spicules, a short and thick tail, and an esophagus with a wider glandular region.

Narrow hypodermal lateral chords and the 2 lateral internal cuticular crests are typical for Dirofilaria spp (8). The specimen was not D. repens or a Nochtiella species because of the smooth body cuticle. The left spicule (length 378 µm), with a handle and lamina of equal length, was similar to that of D. immitis (Figure 1, panel C). Other measurements were similar to those of D. immitis (esophagus length 1,200 µm; right spicule length 170 µm; tail length 110 µm; width at the anus 110 µm) (8).

To confirm morphologic identification, a DNA barcoding approach was used (7). A small piece (≈3 mm) of the nematode was used for DNA extraction and amplification of cytochrome c oxidase subunit 1 (cox1) and 12S rDNA gene fragments as described (9). Sequences were deposited in the European Molecular Biology Laboratory Nucleotide Sequence Database (accessions nos. HQ540423 and HQ540424). In accordance with morphologic identification, BLAST (http://blast.ncbi.nlm.nih.gov) analysis of both genes showed overall highest nucleotide similarity with those of D. immitis available in GenBank (12S rDNA, accession nos. AM779770 and AM779771; cox1, accession nos. AM749226 and AM749229). 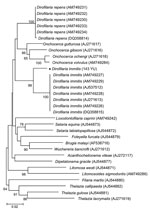 Phylogenetic analysis using cox1 sequences by MEGA 4.0 (www.megasoftware.net), a neighbor-joining algorithm, and Kimura 2-parameter correction confirmed that 143 YU clustered with D. immitis from different countries, including Australia (GenBank accession no. DQ358815) and Italy (other sequences in Figure 2). The cox1 sequence of D. immitis from a dog in Pará, Brazil, was identical with those of the same species in GenBank. Topology of 12S rDNA sequences was identical with that of cox1 sequences. However, comparison of nematode sequences with those in GenBank showed large differences in nucleotide similarities (5% and 6% for 12S rDNA and cox1, respectively).

Morphologic comparison with male worms isolated from dogs (1 from People’s Republic of China and 1 from Japan, Muséum National d’Histoire Naturelle accession nos. 63 SE and 169 YU) showed that the area rugosa (ventral ornamentation of the posterior region) was similar among all specimens examined and was composed of ≈8 longitudinal crests, each containing aligned segments (length 15–30 µm) extending 1–8 mm from the tail tip (Figure 1, panel D). Arrangement and number of caudal papillae were also similar (10). The preesophageal cuticular ring was present in D. immitis reference specimens but was not present in the specimen from Brazil. In addition, the deirids were more anterior in the worm from Brazil than in reference specimens. This finding might be caused by less growth of the nematode found in the patient from Brazil.

Similar morphologic features (small size and anterior deirids) have been reported in a D. immitis male worm from a dog in Cayenne, French Guiana (11). However, a D. spectans worm from an otter in Brazil had a similar body size and location of deirids as the worm 143 YU but a different pattern of juxtacloacal papillae.

In Brazil, human pulmonary dirofilariasis caused by D. immitis has been reported sporadically (12), mainly in southeastern Brazil, where the prevalence of heartworm in dogs ranges from 2.2% to 52.5% (13). The patient in this study came from a region in Brazil where canine dirofilariasis caused by D. immitis is endemic and in which the prevalence of microfilaremic dogs is <32.5% (14). Morphologic features and overall high identity of 12S rDNA and cox1 gene sequences compared with the reference DNA sequences confirmed that the worm recovered was similar to D. immitis. However, nucleotide similarity differences in comparison with other sequences of D. immitis available in GenBank (including 1 from Brazil) were 5% and 6% for 12S rDNA and cox1 genes, respectively, which are higher than the range of intraspecific variation (<0.8%) reported for D. immitis originating from the United States, Italy, and Japan (7). Such variation (>5%) has not been reported for a Dirofilaria species. Therefore, existence of a closely related species (e.g., D. spectans from otters, but also reported from a human in Brazil) (15) should be considered. Further investigations of filarial nematodes from dogs and wild mammals in Brazil are required to elucidate the identity of this Dirofilaria species and its primary hosts and vectors.

We thank G. Testini, R.P. Lia, M. Barbuto, and A. Galimberti for assistance with laboratory work and data analysis and S. Uni for providing specimens of D. immitis from Japan.

This work is dedicated to Silvio Pampiglione, who enthusiastically conducted several studies in the field of human parasitology, including dirofilariasis. His exchange of ideas with D.O. and O.B. contributed to discussions in the conclusions of this report.

The Annual Meeting Program Committee awarded the video presented in this report “Best of Show” for the 2010 Joint Meeting of the American Academy of Ophthalmology and Middle East Africa Council of Ophthalmology, Chicago, Illinois, USA, October 16–19, 2010.