The dispersal mechanism of Geomyces destructans, which causes geomycosis (white nose syndrome) in hibernating bats, remains unknown. Multiple gene genealogic analyses were conducted on 16 fungal isolates from diverse sites in New York State during 2008–2010. The results are consistent with the clonal dispersal of a single G. destructans genotype.

Geomycosis, or white nose syndrome, is a newly recognized fungal infection of hibernating bats. The etiologic agent, the psychrophilic fungus Geomyces destructans, was first recognized in caves and mines around Albany, New York, USA (1,2). The disease has spread rapidly in New York and other states in the northeastern United States. At least 1 affected bat species is predicted to face regional extinction in the near future (3). Much remains unknown about this fungus, including its ecology and geographic distribution. For example, although hibernacula are high on the list of suspected sites, where the bats acquire this infection is not known. Similarly, although strongly suspected, the role of humans and other animals in the dispersal of G. destructans and the effect of such dispersals in bat infections have not been confirmed. We recently showed that 6 G. destructans strains from sites near Albany were genetically similar (2), raising the possibility of a common source for the spread of this infection. Corollary to this observation and other opinions (3,4), the US Fish & Wildlife Service has made an administrative decision to bar human access to caves as a precautionary measure (www.fws.gov/whitenosesyndrome/pdf/NWRS_WNS_Guidance_Final1.pdf). Thus, an understanding of the dispersal mechanism of G. destructans is urgently needed to formulate effective strategies to control bat geomycosis.

We applied multiple gene genealogic analyses in studying G. destructans isolates; this approach yields robust results that are easily reproduced by other laboratories (5). Sixteen G. destructans isolates recovered from infected bats during 2008–2010 were analyzed. These isolates originated from 7 counties in New York and an adjoining county in Vermont, all within a 500-mile radius (Table 1). The details of isolation and identification of G. destructans from bat samples have been described (2). One isolate of a closely related fungus G. pannorum M1372 (University of Alberta Mold Herbarium, Edmonton, Alberta, Canada) was included as a reference control. To generate molecular markers, 1 isolate, G. destructans (M1379), was grown in yeast extract peptone dextrose broth at 15°C, and high molecular weight genomic DNA was prepared according to Moller et al. (6). A cosmid DNA library was constructed by using pWEB kit (Epicenter Biotechnologies, Madison, WI, USA) by following protocols described elsewhere (7). One hundred cosmid clones, each with ≈40-Kb DNA insert, were partially sequenced in both directions by using primers M13 and T7. The nucleotide sequences were assembled with Sequencher 4.6 (Gene Codes Corp., Ann Arbor, MI, USA) and BLAST (www.ncbi.nlm.nih.gov/BLAST) homology searches identified 37 putative genes. Sequences of 10 genes, including open reading frames, 3′ and/or 5′ untranslated regions, and introns, were evaluated as potential markers for analyzing G. pannorum and G. destructans. Our screening approach indicated that 8 gene targets could be amplified from both G. destructans and G. pannorum by PCR (Table 2). 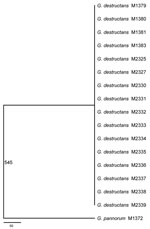 Figure 1. Consensus maximum-parsimony tree derived from analyzing 8 concatenated gene fragments including a total of 4,470 aligned nucleotides by using PAUP* 4.0 (8). The number 545 on the branch indicates the total... 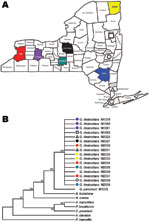 Figure 2. Collection sites in New York counties (A) are color-matched with respective Geomyces destructans isolates in maximum-parsimony tree based on nucleotide sequence of the VPS13 gene (B). The tree was constructed with...

Our finding of a single clonal genotype in G. destructans population fits well with the rapid spread of geomycosis in New York (Figure 2). Our sampling population covered both spatial and temporal dimensions, and the numbers of isolates analyzed were adequate in view of difficulties encountered in obtaining pure isolations of G. destructans (11). Although the affected New York sites are separated by sizable distances and include geographic barriers, a role for the natural dissemination of the fungus through air, soil, and water cannot be ruled out. Indeed, several fungi with geographic distributions similar to that in our study have shown major genetic variation among strains (12,13). It is also possible that humans and/or animals contributed to the rapid clonal dispersal. In such a scenario, the diseased or asymptomatic bats might act as carriers of the fungus by their migration into new hibernation sites where new animals get infected and the dissemination cycle continues (4). Similarly, the likely roles played by humans and/or other animals in the transfer of the fungal propagules from an affected site to a clean one cannot be ruled out from our data.

Virulent clones of human and plant pathogenic fungi that spread rapidly among affected populations have been recognized with increasing frequency in recent years (12,14). However, other pathogens, such as the frog-killing fungus Batrachochytrium dendrobatidis, have emerged with both clonal and recombining populations (13). Our data do not eliminate the possibility that the G. destructans population undergoes recombination in nature. This process to generate genetic variability would require some form of sexual reproduction, which remains unknown in G. destructans. In addition, the fungus might have both asexual and sexual modes in its saprobic life elsewhere in nature, but it exists only in asexual mode on bats (15).

In conclusion, our data suggest that a single clonal genotype of G. destructans has spread among affected bats in New York. This finding might be helpful for the professionals involved in devising control measures. Many outstanding questions remain about the origin of G. destructans, its migration, and reproduction, all of which will require concerted efforts if we are to save bats from predicted extinction (3).