Human Parvovirus 4 in Nasal and Fecal Specimens from Children, Ghana

Nonparenteral transmission might contribute to human parvovirus 4 (PARV4) infections in sub-Saharan Africa. PARV4 DNA was detected in 8 (0.83%) of 961 nasal samples and 5 (0.53%) of 943 fecal samples from 1,904 children in Ghana. Virus concentrations ≤6–7 log10 copies/mL suggest respiratory or fecal–oral modes of PARV4 transmission.

Human parvovirus 4 (PARV4; human partetravirus) is a single-stranded DNA virus discovered in 2005 (1). PARV4 has been detected in persons at risk for parenteral infections, suggesting blood-borne transmission (2,3) although other transmission routes have not been ruled out. Studies in northern Europe demonstrated a high prevalence of antibodies against PARV4 in injection drug users, persons co-infected with HIV and hepatitis C virus, and persons with hemophilia who were exposed to nonvirally inactivated clotting factors; however, antibodies were not detected in the general population (4,5).

In contrast, PARV4 seroprevalence was 25%–37% in adults in the Democratic Republic of Congo, Cameroon, and Burkina Faso who were not infected with HIV and hepatitis C virus (6). PARV4 DNA was detected in blood of 8.6% of children 15 or 24 months of age in Ghana (7). There was no history of exposure to multiple-use needles or blood transfusion in any of these children. These data suggested alternative modes of PARV4 transmission in countries in Africa. Nonparenteral modes of transmission of PARV4 have also been suggested in South Africa (6), Taiwan (8), India (9), China (10), and Thailand (11).

PARV4 has been classified into 3 genotypes. Genotypes 1 and 2 are found in North America, Europe, and Asia (1–3,9–11), and genotype 3 is found in in sub-Saharan Africa (7,12). To investigate whether PARV4 is found in the respiratory or intestinal tract, we analyzed previously collected specimens from 1,904 children in Ghana.

Ethical approval for this study was provided by the Committee on Human Research Publication and Ethics, Kwame Nkrumah University of Science and Technology, Kumasi, Ghana. Informed consent was obtained from parents or guardians of all children.

A total of 1,904 anonymous nasal and fecal specimens were obtained during a study on molecular diagnostics for respiratory and enteric tract infections in symptomatic children <15 years of age at the Presbyterian Hospital in Agogo, Ghana. Nasal swab specimens were obtained from children with upper or lower respiratory tract symptoms. Fecal samples were obtained from 504 children with gastrointestinal symptoms (53.4% of sampled children; 294 [58.3%] of symptomatic children with vomiting, 190 [37.7%] with diarrhea, and 144 [28.6%] with acute malnutrition; 9 [1.8%] with incomplete clinical data) and 439 (46.6%) children without gastrointestinal symptoms.

To exclude bias from DNA purification methods, PARV4-negative nasal and fecal specimens were spiked with quantified plasmid standards. Subsequent quantification was equivalent between techniques and specimens, and differences between specimen types in several experiments were <0.5 log10 copies/mL. Standard procedures were used to prevent PCR contamination. Determination of PARV4 genotypes was conducted by nucleotide sequencing of several genomic target regions (Table). 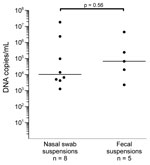 Figure 1. . . Parvovirus 4 DNA loads in virus-positive nasal and fecal specimens from children, Ghana. Virus concentrations are given on a log scale on the y-axis. Each dot represents 1 specimen....

Nucleotide sequencing of amplicons generated by screening PCRs and sequencing of additional genomic regions classified all viruses as PARV4 genotype 3 (Table) (GenBank accession numbers JN183920–JN183932). This result was confirmed by phylogenetic analysis of a 483-nt fragment of the capsid-encoding open reading frame 2 (Figure 2).

We found PARV4 in 0.8% of nasal swab specimens and 0.5% of fecal specimens from 2 groups of children in Ghana symptomatic for respiratory illness and with or without diarrheal illness, respectively. Our results provide evidence to suggest that the higher prevalence of PARV4 reported among adults in countries in western Africa (6) might be caused by transmission by the respiratory or fecal–oral route.

It is unclear to what extent the putative nonparenteral transmission routes of PARV4 genotype 3 in western Africa apply to other areas. Markedly lower PARV4 antibody prevalences observed in Europe (4,5) argue against PARV4 spread by nonparenteral routes, e.g., from infected injection drug users to the general population. Likewise, the higher prevalence of PARV4 antibodies in HIV-infected blood donors in South Africa compared with uninfected donors (6) appears incompatible with PARV4 transmission primarily by the respiratory route. Therefore, our results do not contradict those of a study conducted in Scotland, which showed no PARV4 in respiratory specimens (15).

Because of the small number of children with PARV4 DNA in nasal or fecal specimens, correlation of infection with age groups was not possible. A limitation of our study was the lack of blood specimens from children with current respiratory or fecal PARV4 shedding, and serologic studies are needed to evaluate susceptibility of different age groups to PARV4 infection. Furthermore, detection of PARV4 in patients with respiratory disease does not indicate that PARV4 was the cause of the disease. In 5 of 8 PARV4-positive nasal swabs, typical respiratory viruses (parainfluenza virus, influenza A virus, rhinovirus) were also detected and the pattern of symptoms in PARV4-positive children did not differ from symptoms in PARV4-negative children. Similarly, 3 of 5 children with PARV4-positive feces did not have gastrointestinal symptoms at the time of fecal sampling. One child had vomiting and another child had vomiting and diarrhea. Moreover, in 3 of these 5 children, in addition to PARV4, Giardia lamblia, a potential cause of diarrhea, was also detected.

Although data for exposure and risk factors and paired samples were not available, suggested transmission routes might explain the high infection rates in western Africa. Further studies are needed to assess the effect of PARV4 excretion on virus epidemiology and the chronology of PARV4 infection.

Dr Drexler is a physician and clinical virologist at the University of Bonn. His research interest is characterization of novel human and zoonotic viruses.

We thank the children and their parents for participating in the study and Carmen Poster for excellent technical assistance.

Page created: October 05, 2012
Page updated: October 05, 2012
Page reviewed: October 05, 2012
The conclusions, findings, and opinions expressed by authors contributing to this journal do not necessarily reflect the official position of the U.S. Department of Health and Human Services, the Public Health Service, the Centers for Disease Control and Prevention, or the authors' affiliated institutions. Use of trade names is for identification only and does not imply endorsement by any of the groups named above.

Human Parvovirus 4 in Nasal and Fecal Specimens from Children, Ghana