Schmallenberg virus (SBV), an orthobunyavirus of the Simbu serogroup, recently emerged in Europe and has been suggested to be a Shamonda/Sathuperi virus reassortant. Results of full-genome and serologic investigations indicate that SBV belongs to the species Sathuperi virus and is a possible ancestor of the reassortant Shamonda virus.

A novel virus, Schmallenberg virus (SBV), was discovered in Europe in October 2011, and since then, cases of SBV infection have been reported in sheep, cattle, and goats in several European countries (1–4). Preliminary phylogenetic analyses revealed that SBV is a member of the genus Orthobunyavirus within the family Bunyaviridae and is related to Simbu serogroup viruses (1). Similar to Akabane virus (AKAV), another Simbu serogroup virus, SBV can cause fatal congenital defects by infection of fetuses during a susceptible stage in pregnancy (2). Vaccines for SBV are not available. Thus, SBV poses a serious threat to naive populations of ruminant livestock in Europe.

Orthobunyaviruses are arthropod-borne viruses with a negative-stranded tripartite RNA genome comprising large (L), medium (M), and small (S) segments. Genetic reassortment occurs naturally among these viruses, which results in the emergence of new virus strains that have altered biologic properties (5). The L segment encodes the RNA-dependent RNA polymerase; antigenic determinants are the M-encoded viral surface glycoproteins Gn and Gc, which are responsible for viral attachment, cell fusion, hemagglutination, and the induction of neutralizing antibodies, and the S-encoded nucleocapsid protein N, which plays a role in complement fixation (6). In the pregenomics era, orthobunyavirus relationships were determined solely by serologic cross-reactivity analyses (7), but since DNA sequencing became available, phylogenetic relationships have additionally been assessed by comparison of partial genome sequences (8,9). However, published full-length genome sequence information is sparse, which makes in-depth phylogenetic analysis difficult. Therefore, a detailed taxonomic classification of SBV could not be made initially when the virus emerged.

The first report of SBV showed highest similarities of M- and L-segment sequences to partial Aino virus and AKAV sequences, whereas the N gene was most closely related to Shamonda virus (SHAV) (1). Additionally, results of recent investigations on complete N and M genes and partial L genes of SHAV, Douglas virus (DOUV), and Sathuperi virus (SATV) suggested that SBV is a reassortant consisting of the M segment from SATV and the S and L segments from SHAV (9). Conversely, in 2001, SHAV was described as a reassortant virus comprising the S and L segments of SATV and the M segment from the unclassified Yaba-7 virus (8). To clarify the phylogenetic relationships and classification of SBV within the Simbu serogroup, we conducted genetic and serologic investigations of its relationship to 9 other Simbu serogroup viruses. 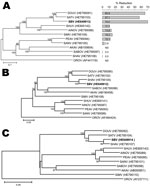 Figure. . . . Maximum-likelihood trees showing phylogenetic relationships of Simbu serogroup viruses for the M (A), L (B), and S (C) coding regions. The bar plot in panel A indicates the...

A phylogenetic tree derived from the M gene (Figure, panel A) demonstrates that SBV and DOUV cluster closely with SATV, whereas SHAV was placed distantly from all other viruses. In contrast, phylogenetic trees of the L (Figure, panel B) and N (Figure, panel C) genes showed a close relationship between SBV and SHAV. Results for all genome segments show that SBV should be classified within the species Sathuperi virus and is likely to be the ancestor of SHAV, which is in contrast a reassortant virus comprising the S and L segments from SBV and the M segment from another virus, as proposed previously (8).

To further clarify the placement of SBV within the Simbu serogroup, we determined the ability of SBV antibodies to neutralize other Simbu serogroup viruses. We performed titer reduction assays of the 9 other viruses with anti-SBV serum; the viruses were propagated in BHK-21 cells clone CT (L164, Collection of Cell Lines in Veterinary Medicine, Friedrich-Loeffler-Institute, Riems, Germany). Neutralizing potencies of SBV antibodies against Simbu serogroup virus strains were tested by titrating virus in the presence of anti-SBV serum (neutralizing titer 32); results were expressed as percentage titer reduction in relation to a parallel test without antiserum. Although DOUV and SATV were well neutralized, SHAV titers were not reduced at all (Figure, panel A), which supports the M gene phylogeny. Thus, phylogeny and cross-reactivity identified SHAV, but not SBV, as a reassortant within the Simbu serogroup.

In addition to showing that SBV belongs to the species Sathuperi virus, our results show that the virus is most likely not a reassortant and is likely to be one of the ancestors of SHAV, whereas SHAV is a reassortant comprising the SBV S and L genomic segments and the M segment from an unclassified virus. These detailed insights into the phylogeny of SBV could be the basis for the development of efficient, cross-protective vaccines. Our results also highlight the importance of full-genome analyses to identify potential genetic reassortments and to investigate the evolutionary history of viruses with segmented genomes.

Dr Goller is a molecular biologist and postdoctoral scientist at the Friedrich-Loeffler-Institute, Institute of Diagnostic Virology, Greifswald-Insel Riems, Germany. Her research interests are emerging animal viruses, molecular diagnostics, and epidemiology, as well as phylogenetic analyses.

We thank Robert Tesh and his colleagues at the University of Texas Medical Branch for providing the strains of the Simbu serogroup viruses. We are indebted to Moctezuma Reimann and Bianka Hillmann for excellent technical assistance.

This work was funded by the European Union FP7 projects EMPERIE (no. 223498) and RAPIDIA-Field (no. 289364) and the Federal Ministry of Food, Agriculture and Consumer Protection, Germany.