Some calciviruses bind to histo-blood group antigens (HBGA) expressed on cells in the gastrointestinal tract (1). Human NoV strains demonstrate strain-dependent binding patterns to HBGAs (1,2). ABO blood groups and Lewis phenotype also play a role in NoV infections, either as ligands or as restriction factors (2). Moreover, a non-sense mutation in the fucosyltransferase gene 2 (FUT2), which gives rise to the nonsecretor phenotype, has been found to provide almost complete protection from experimental and natural NoV infection (2,3).

A total of 292 children ≤5 years of age (205 symptomatic and 87 asymptomatic) were randomly selected among 694 symptomatic and 158 asymptomatic children who participated in a community- and hospital-based study of sporadic acute diarrhea in León, Nicaragua, during 2005–2006. In brief, clinical cases were evaluated according to the World Health Organization strategy for diarrhea management (5), and fecal, blood, and saliva samples were collected from each child.

The RT products were amplified by SaV PCR using forward JV33 and reverse SR80 primers (6,7). This amplification was followed by an outer PCR with a primer pool of 2 forward (SV-F13 and SV-F14) and 2 reverse (SV-R13 and SV-R14) primers (8). Nested PCR was performed under identical conditions to the outer PCR with a primer pool consisting of universal forward primers (SV-F13 and SV-F14) and genogroup-specific reverse primers (SV-G1-R, SV-G2-R, SV-G4-R, and SV-G5-R). Primers for genogroup 3 were not available.

The N terminal and shell region of the SaV genome were then sequenced by using DYEnamic dye terminator kit (GE Healthcare, Little Chalfont, United Kingdom) (9). All samples included in the study were also screened for the presence of co-infection with the most common enteric pathogens (5). Any samples showing co-infection were then removed from further analysis.

Hemagglutination tests were performed to define blood types. The ABO blood group and Lewis phenotype in saliva were determined for persons found to be secretors as described (10).

SaV-positive specimens were compared with specimens from a control group of children who tested negative for SaV, which was matched in terms of sex, age group, clinical status, and HBGAs using 2-tailed significance with χ2 or Fisher exact tests. GraphPad (GraphPad Software, Inc., La Jolla, CA, USA) was used for statistical analysis.

Of 292 samples analyzed, 33 (25 from symptomatic and 8 from asymptomatically infected children) (11%) were SaV positive. This study found that diarrhea is as common in SaV-infected children as it is in NoV-infected children in Nicaragua (5), and 11% of SaV-infected children were hospitalized (Table 1). Why the prevalence of SaV infections in Nicaraguan children is comparable to the high rate of NoV infections in these children is unknown and can only be speculated upon. Two likely key factors are poor sanitary conditions, which enables the virus to spread easily between susceptible persons, and malnourishment, which makes these children more susceptible to infection. Because we used conventional PCR with widely used JV33 and SR80 primers (6), the method of choice should not have created a bias.

SaV infections were most frequently detected during June–July 2005, in the rainy period (Figure 1), and were only found during March–November. The most common symptoms in SaV-positive children with diarrhea were loss of appetite (52%), vomiting (36%), fever (32%), and abdominal distension (32%). 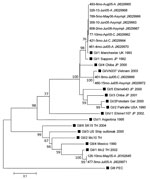 To investigate whether certain SaV genogroups (GI, GII, GIV, or GV) were associated with clinical severity, we examined 25 SaV-positive symptomatic and asymptomatic children. All human SaV genogroups were found in study participants as observed (13). Notably, SaV GI was the dominant (64%) genogroup in Nicaragua, and infection with this genogroup could lead to asymptomatic disease as well as severe disease requiring hospitalization. This finding suggests that factors contributing to severity of SaV disease in Nicaragua are not only related to viral properties, but also to host factors and the surrounding environment. Co-infections with GI:GII and GI:GV were found in 2 symptomatic children, respectively. No association between genogroup and clinical status was observed; GI, GII, and GIV viruses infected symptomatic and asymptomatic children at similar rates (data not shown). Nucleotide sequencing of 12 SaV-positive samples revealed 8 additional strains related to the SaV Manchester strain, isolated in the United Kingdom in 1993, than to the SaV strain isolated in Japan in 1982, both representing genotype 1 within SaV GI (GI/1) (Figure 2).

We have previously investigated whether HBGA were susceptibility markers for NoV infections in children in Nicaragua and observed that secretors of blood type O were highly susceptible to infections with different NoV genotypes (14). No nonsecretors who were carrying the G428A FUT2 mutation were infected with NoV (9,14). To investigate whether HBGAs were associated with SaV susceptibility similar to NoV susceptibility (2,3,11), we examined 22 of 33 SaV-infected children who were either symptomatic (n = 18) or asymptomatic (n = 4) in relation to ABO blood types, Lewis phenotypes, and secretor genotype. Notably, we did not find any significant association between ABO blood groups, Lewis phenotypes, or secretor genotype and susceptibility to SaV infection (Table 2). Children who were secretors (SeSe and Sese428) and nonsecretors (se428se428 and Lea+b-) were susceptible to SaV infections. Our data suggest that SaV can infect secretors and nonsecretors, those who are Lewis phenotype positive as well as Lewis phenotype negative, and persons of all ABO blood groups. However, it must be noted that these data represent susceptibility to symptomatic GI SaV infection. To our knowledge, only 1 report in the literature has explored binding properties of recombinant SaV GI/1 (Mc114) and GV/1 (NK24) to HBGAs and revealed that the recombinant SaV strains investigated showed no specific binding activity to HBGAs from or to synthetic carbohydrates (15).

Our results demonstrate that SaV, similar to NoV, frequently causes acute gastroenteritis in children in Nicaragua (5). However, in contrast to the case with NoV, neither the 428A nonsecretor mutation, nor any of the ABO blood groups or Lewis phenotypes protected children against SaV infection.

Dr Bucardo is a virologist and professor at the National Autonomous University of León, Nicaragua. His main area of expertise is the study of the molecular epidemiology of viruses causing gastroenteritis. He has been involved in standardization and optimization of molecular methods used to detect norovirus and rotavirus.

We thank Licda. Silvia Altamirano and Carolin Jönsson, for their valuable support in the field work and laboratory assistance.

This study was supported by grants from the Swedish International Development Cooperation Agency (grant no. 075007109) and the Swedish Research Council (grant nos. 10392 and 8266). F.B. received a grant from the Network for Research and Training in Tropical Diseases in Central America no. 05-N-2010) for calicivirus research in Nicaragua.