Most emerging infectious diseases of humans or domestic animals are zoonoses, and among emerging pathogens, RNA viruses are highly represented (1). The synanthropic nature of some rodent species makes them important reservoirs of RNA viruses pathogenic to humans, such as hantaviruses (e.g., Seoul virus in black and Norway rats worldwide) and arenaviruses (e.g., Lassa virus in the multimammate mouse in western Africa or lymphocytic choriomeningitis virus in the house mouse worldwide). In Africa, members of the rodent genera Mastomys and Arvicanthis are linked to human activity; these rodents are widespread throughout sub-Saharan Africa and are crop pests and zoonotic reservoirs for human pathogens. Histories of synanthropy are likely longest for rodents in areas of early human sedentism, making RNA virus richness in early centers of domestication such as the Ethiopian Highlands of particular interest.

Hantaviruses (family Bunyaviridae) are RNA viruses primarily carried by rodents and soricomorphs (shrews and moles), although 2 new species have recently been described in bats (2,3). Arenaviruses (family Arenaviridae) are primarily rodent-borne RNA viruses. Members of both genera can cause life-threatening diseases in humans: arenaviruses cause hemorrhagic fevers in the Americas and Africa, and hantaviruses cause hemorrhagic fever with renal syndrome in Asia and Europe and hantavirus cardiopulmonary syndrome in the Americas. In Africa, only Lassa and Lujo arenaviruses are known to be highly pathogenic to humans. In contrast, hantaviruses have not yet been found to cause life-threatening human diseases in Africa, but hantavirus-specific antibodies have been found in human serum samples from several countries in Africa (4,5). To investigate the role of synanthropic small mammals as potential reservoirs of emerging pathogens in Ethiopia, we sampled rodent and shrew species in areas near human habitations and screened them for hantavirus and arenavirus RNA.

A total of 201 small mammals from 6 species were screened for arenaviruses and hantaviruses (Table). Among them, 1 Ethiopian white-footed mouse (Stenocephalemys albipes) from Golgolnaele and 2 Awash multimammate mice (Mastomys awashensis) from Aroresha were positive for arenavirus RNA; 10 white-footed mice from the 2 highland localities (6 from Golgolnaele, 4 from Mahbere Silassie) were positive for hantavirus RNA. Amplicons were purified and sequenced, and nucleotide sequences were aligned on the basis of the amino acid alignment. Phylogenetic analyses were performed on the nucleotide sequences by using a maximum-likelihood (ML) approach (8).

After sequencing of the 3 arenavirus-positive samples, 3 distinct arenavirus sequences were obtained, and an ML tree was constructed for these 3 arenavirus sequences and the partial L gene (340 bp) of representatives of Old World arenaviruses (Figure 1). The 3 sequences cluster with Mobala virus (80% bootstrap support), an arenavirus discovered in Praomys sp. in the Central African Republic in 1983 (10). However, the 3 sequences from Ethiopia are not monophyletic; the 2 sequences from multimammate mice cluster together (94% bootstrap support), but the sequence from the white-footed mouse from Golgolnaele is basal to the clade (Mobala + M. awashensis virus sequences), with the Menekre virus, found in Hylomyscus sp. in Guinea (11), as outgroup. The sequences from multimammate mice on average differ from those of Mobala virus and the sequence from the white-footed mouse by the same order of magnitude in terms of amino acids: 5.0 ± 2.1% and 5.9 ± 2.2%, respectively. The average amino acid difference between the sequence from the white-footed mouse and that from Mobala virus was 8.1 ± 2.6%. Therefore, these arenaviruses seem to be 2 strains of Mobala virus carried by 2 rodent species and found in 2 localities ≈250 km apart from each other and with an altitude difference of 1,100 m. 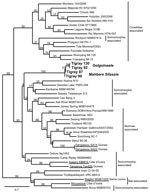 Two rodent species living in close proximity to human settlements in Ethiopia are carriers of arenaviruses and hantaviruses. Recently, several new arenaviruses and hantaviruses have been described in small mammals in Africa, but no clear association with human diseases has been found (2,3,9,11–13). However, arenavirus and hantavirus infections are likely severely underreported because symptoms may resemble those of many other febrile infections (2). Investigating the presence of antibodies for Mobala virus and the proposed Tigray virus in humans in the Ethiopian Highlands is the next step in evaluating their pathogenicity. A recent study in Guinea showed that 2/68 patients with fever of unknown origin had antibodies for Sangassou hantavirus (5); a case of putative hantavirus disease (hemorrhagic fever with renal syndrome) was also reported in the Central African Republic (14). Hantavirus infections may thus be an unrecognized medical problem in Africa and deserve more attention.

In conclusion, our screening of 201 small mammals led to the identification of 2 novel strains of Mobala arenavirus and a novel hantavirus in 2 rodent species found in Ethiopia, M. awashensis and S. albipes. These rodents belong to the exclusively African Praomyini tribe (15), which hosts 5/11 arenaviruses (Lassa, Mopeia, Luna, Mobala, and Menekre viruses) and the only Murinae-associated hantavirus (Sangassou virus) described in Africa. Our results support a major role for Praomyini as hosts in the evolutionary history of arenaviruses and hantaviruses in Africa.

Dr Meheretu is a lecturer at Mekelle University and a postdoctorate researcher at the Academy of Sciences of the Czech Republic Institute of Vertebrate Biology. His research interests are rodent pests that cause agricultural damage and act as natural reservoirs of human pathogens in Ethiopia.

This work was supported by the Flemish Interuniversity Council, Belgium; the University of Antwerp; the Fund for Scientific Research–Flanders (FWO grant no. 1.5.264.12); the Czech Science Foundation (GACR grant P502/11/J070); and the German Research Foundation (DFG grant GU 883/2-1). During this study, Y.M. was a PhD fellow with the Mekelle University–Institutional University Cooperation project.