To increase our knowledge of the geographic distribution of hantaviruses associated with neotomine or sigmodontine rodents in Mexico, we tested 876 cricetid rodents captured in 18 Mexican states (representing at least 44 species in the subfamily Neotominae and 10 species in the subfamily Sigmodontinae) for anti-hantavirus IgG. We found antibodies against hantavirus in 35 (4.0%) rodents. Nucleotide sequence data from 5 antibody-positive rodents indicated that Sin Nombre virus (the major cause of hantavirus pulmonary syndrome [HPS] in the United States) is enzootic in the Mexican states of Nuevo León, San Luis Potosí, Tamaulipas, and Veracruz. However, HPS has not been reported from these states, which suggests that in northeastern Mexico, HPS has been confused with other rapidly progressive, life-threatening respiratory diseases. Analyses of nucleotide sequence data from 19 other antibody-positive rodents indicated that El Moro Canyon virus and Limestone Canyon virus are geographically widely distributed in Mexico.

Specific rodents (usually 1 or 2 closely related species) are the principal hosts of the hantaviruses, for which natural host relationships have been well characterized. The current principal host relationships of some hantaviruses seem to represent a long-term association between viruses in the genus Hantavirus and rodents in the family Cricetidae. Evidence for this ancient relationship includes the association of phylogenetically closely related hantavirus species with phylogenetically closely related allopatric rodent species. For example, Catacamas virus is associated with Coues’s rice rat (Oryzomys couesi) in Honduras, and Bayou virus is associated with the marsh rice rat (Oryzomys palustris) in the southeastern United States (9,15).

Our knowledge of the rodent-associated hantaviruses in Mexico includes the following findings: HUIV RNA in a western harvest mouse (R. megalotis) captured in Morelos (8); CARV RNA in a Sumichrast’s harvest mouse (R. sumichrasti) and MTNV RNA in an Orizaba deer mouse (P. beatae) from Guerrero (8); Playa de Oro virus RNA in a Mexican oryzomys (Oryzomys mexicanus) and Jaliscan cotton rat (S. mascotensis) from Colima (13); ELMCV RNA and SNV RNA in western harvest mice from Zacatecas (14); antibody against hantavirus in nimble-footed mice (P. levipes) captured in Tamaulipas (19); and antibody against hantavirus in a North American deer mouse (P. maniculatus), transvolcanic mice (P. hylocetes), black-eared mice (P. melanotis), and Sumichrast’s harvest mouse captured in the state of Mexico (20,21). The purpose of this study was to extend our knowledge of the geographic distribution of hantaviruses associated with neotomine or sigmodontine rodents in Mexico.

Blood samples from 876 rodents, representing at least 44 species in the Neotominae and 10 species in the Sigmodontinae, were tested for anti-hantavirus IgG. The 876 rodents were captured during 1998–2008 at 43 localities in 18 states in Mexico (Table A1). Blood samples from all of the rodents and lung samples from the antibody-positive rodents were acquired from the Natural Science Research Laboratory, Museum of Texas Tech University, Lubbock, Texas, USA.

The blood samples were tested for IgG to Caño Delgadito virus (CADV) strain VHV-574 by using an ELISA in which CADV can be highly cross-reactive with SNV, BCCV, and other North American hantaviruses (22). The antibody titers in the antibody-positive blood samples were recorded as 320, 1,280, or >5,120.

Samples of lung tissue from the antibody-positive rodents were tested for hantavirus nucleocapsid (N) protein gene RNA. Subsequently, we determined the nucleotide sequences of a 1,078-nt fragment of the glycoprotein precursor (GPC) genes of 11 of the hantaviruses associated with the antibody-positive rodents. We chose these 11 viruses to represent the geographic distribution and natural host associations of the hantaviruses in Mexico included in this study. Total RNA was isolated from 30 mg to 45 mg of lung tissue by using Tri Reagent (Sigma-Aldrich, St. Louis, MO, USA). First-strand cDNA was synthesized from small (S) segment and medium (M) segment RNA by using SuperScript II RNase H– Reverse Transcriptase (Invitrogen Life Technologies, Inc., Carlsbad, CA, USA) in conjunction with oligonucleotide 5′-GGTGGTTGTGGTAGTAGTAGACTCC-3′ (23). The first-round and second-round (hemi-nested) PCR assays used the MasterTaq Kit (Eppendorf North America, Inc., Westbury, NY, USA). (The sequences of the oligonucleotides that were used to prime the PCR are available from the corresponding author.) The sizes of the N protein gene amplicons from the second-round assays ranged from 377 to 545 bp, the sizes of the GPC gene amplicons from the second-round assays ranged from 607 to 631 bp (M1 amplicon) and 571 to 618 bp (M2 amplicon), and the lengths of the overlaps between the M1 and M2 amplicons ranged from 125 to 134 bp. Together, the nucleotide sequences of the M1 and M2 amplicons encoded a 359-aa fragment of the GC glycoprotein.

The sequences in each dataset were aligned by using the computer program ClustalW version 2.0.12 (24). Sequence nonidentities were equivalent to uncorrected (p) distances. The phylogenetic analyses of nucleotide sequences were conducted with MRBAYES 3.1.2 (25) and programs in the computer software package PAUP* (26). The Bayesian analyses used the general time reversible + proportion invariant + Γ model and the following options in MRBAYES 3.1.2: two simultaneous runs of 4 Markov chains, 2 million generations, and sample frequency = every 1,000th generation. The first 1,000 trees were discarded after review of the likelihood scores, convergence statistics, and potential scale reduction factors; and a consensus tree (50% majority rule) was constructed from the remaining trees. Probability values in support of the clades were calculated a posteriori, and clades with probability values >0.95 were considered supported by the data (27). 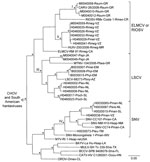 Figure 3. Results of the Bayesian analyses of the nucleotide sequences of a 1,078-nt fragment of the glycoprotein precursor genes of 11 of the 24 hantaviruses found in Mexico in this study and...

Hantavirus GPC gene RNA was detected in each of the 11 rodents assayed for GPC gene RNA (Table). The topology of the GPC gene tree (Figure 3) was essentially identical to the topology of the N protein gene tree (Figure 2) with respect to relationships between the viruses from Mexico in this study, CARV, HUIV, MTNV, and the other hantaviruses found in North America. M0040008, CARV, M0040059, H0460041, HUIV, and ELMCV were monophyletic in the Bayesian analyses of the GPC gene sequence data (Figure 3) and N protein gene sequence data (Figure 2).

The Eighth Report of the International Committee on Taxonomy of Viruses sets forth the criteria for species demarcation in the genus Hantavirus (1). One of these criteria is that strains of different species must exhibit at least a 7% difference in amino acid sequence identity in comparisons of complete N protein sequences and in comparisons of complete GPC sequences.

Specific knowledge of the natural host relationships of LSCV previously was limited to LSCV RNA in 6 brush mice (P. boylii) captured in northern Arizona (11). The results of this study indicate that the transvolcanic mouse (P. hylocetes) and the black-eared mouse (P. melanotis) in the state of México, the nimble-footed mouse (P. levipes) in Nuevo León, the El Carrizo deer mouse (P. ochraventer) in San Luis Potosí, and the gleaning mouse (P. spicilegus) in Jalisco are natural but not necessarily principal hosts of LSCV.

The results of this study indicate that SNV is widely distributed in northeastern Mexico. The geographic distribution of deer mice (P. maniculatus) in Mexico includes 23 states (28), and ≈20 million persons lived in rural areas in this 23-state region in 2010 (32). Yet, to our knowledge, no cases of HPS have been reported from northeastern Mexico or elsewhere in Mexico.

We hypothesize that HPS caused by SNV in Mexico has been confused with other rapidly progressive, life-threatening respiratory diseases (e.g., plague, tularemia, pneumococcal pneumonia, influenza). Alternatively, SNV in Mexico is substantially less virulent than SNV in the western United States, or human contact with SNV-infected rodents in Mexico is less frequent or less intimate than human contact with SNV-infected rodents in the western United States.

Laboratory confirmation of the diagnoses of most HPS cases in the United States before 2010 was based on the results of serologic assays in which ELMCV and LSCV can be highly cross-reactive with SNV (31). Thus, in all likelihood, some of the HPS cases from the western United States were actually caused by ELMCV or LSCV, and these viruses as well as SNV are etiologic agents of HPS in Mexico.

Ms Milazzo is a senior research associate at the University of Texas Medical Branch, Galveston. Her scientific interests include the epidemiology and ecology of New World rodent-borne RNA viruses.

We thank Robert J. Baker for facilitating the loan of the samples from the Natural Science Research Laboratory, Museum of Texas Tech University; Eleanor R. Deardorff and Avery O. Tatters for assisting with the genetic characterization of the hantaviruses in Mexico.

This study was financially supported by National Institutes of Health grants AI-041435 and AI-067947. Christina Cassetti and Patricia Repik facilitated the grant support for this study.