A high proportion of triatomine insects, vectors for Trypanosoma cruzi trypanosomes, collected in Arizona and California and examined using a novel assay had fed on humans. Other triatomine insects were positive for T. cruzi parasite infection, which indicates that the potential exists for vector transmission of Chagas disease in the United States.

One critical aspect of transmission is parasite reservoirs; hence, the epidemiologic importance of identifying animal sources of the vectors’ blood meals, the likelihood of these vectors also feeding on humans, and their incidence of T. cruzi infection. Blood meals consumed by insect vectors have been detected by using several molecular techniques (8), but assays are challenging because of degradation of the blood in the vector’s gut, PCR inhibition, the often small size of a blood meal, and the difficulty of distinguishing multiple blood meals. We analyzed T. cruzi vectors collected in California and Arizona by using a novel technique— cloning following PCR amplification using universal vertebrate primers—to determine the source of blood meals and indicate the likelihood of parasite transmission to humans.

Insects were collected by using light traps at Redington Road, Tucson, Arizona, and Escondido, California, in 2007, and within the Arizona-Sonora Desert Museum, Tucson, in 2009 (Table 1). We examined blood meals (9) and T. cruzi parasite infection (10) of 13 insects from 2 species of kissing bugs, Triatoma rubida and T. protracta. A mouse-fed T. recurva bug served as a control (11). Using universal vertebrate primers for cytB and 12S (12,13), we identified as many blood meals as possible (Table 1). We cloned and sequenced the PCR products to isolate multiple blood meals within a single insect (Table 2). Blood meal sources were inferred by using BLAST (http://blast.ncbi.nlm.nih.gov/Blast.cgi). Pearson χ2 tests compared the likelihood of feeding on humans between vector species and compared the cytB and 12S assays for differences in the number of blood meal taxa and blood meal haplotypes (i.e., unique DNA sequences) per insect (JMP Ver9; SAS, Cary, NC, USA). 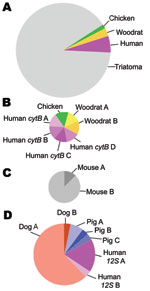 The cytB and 12S assays differed in the specificity of primers for vertebrate DNA and number of blood meals per insect (Figure). More than 70% of DNA cloned in the cytB assay was from the insect (64/87 clones); ≈10% of clones did not produce interpretable sequences. In contrast, the 12S assay did not clone insect DNA, and all sequences were interpretable. The average number of blood meals per insect was not statistically different (cytB 0.56 taxa/insect, 12S 1.75 taxa/insect; χ2 8.31; p<0.10); however, the average number of haplotypes/insect was significantly higher for 12S (cytB 0.78, 12S 2.75; χ2 9.09; p<0.02).

The cytB assay detected more haplotypes from each blood meal taxon, indicating the bugs fed on unique individuals; 4 human and 2 woodrat sequences were all different from each other. In contrast, for 12S, 17/18 dog sequences were identical, as were 2/3 human and 3/4 pig sequences.

The mouse-fed control (11) was the only insect for which no vector DNA was cloned in the cytB assay. All 8 clones from the control were mouse; 7 were identical. Although unexpected, heteroplasmic mitochondrial DNA has been reported for inbred mice (14).

We found that 38% bugs of 2 species of T. cruzi vectors endemic to the United States, T. rubida and T. protracta, fed on humans. Infection with the Chagas parasite, T. cruzi, was high (55% for T. protracta bugs), but no insect was positive for human blood meals and the parasite. Both vectors are common in the foothills of Tucson, Arizona (2); although the T. rubida bugs in this study were uninfected, another study found that 67% of adult bugs collected around Tucson were infected with T. cruzi parasites (15).

The Arizona-Sonora Desert Museum in Tucson exhibits desert animals. All 4 insects collected from near the museum had fed on canids (dog/coyote/wolf; Canis spp.); 1 had fed on pigs and 2 on humans. Although canid samples are not distinguishable by 12S, there are no dogs at the museum, so the insects probably fed on coyotes or wolves. Although javelina (Tayassu tajacu), a species similar to pigs, are at the museum, sequences were 99% identical to pig (Sus scrofa) and only a 90% match with javelina. The source of the human blood meals is not clear. No one lives at the museum, but there is camping in the area.

Around Escondido, we found T. protracta bugs fed on humans, woodrats, and domestic chickens, according to the cytB assay. This assay amplified only vector DNA from 4/7 insects, which could mean it had been a long time since the last blood meal and thus the DNA was highly degraded. We detected only 1 blood meal source in the other 3 insects from California but found 2 woodrat sequences in a single insect. Both T. rubida bugs collected in California had fed only on humans; 2 unique human sequences from 2 clones from 1 insect suggest it had fed on 2 humans.

Compared with cytB, the 12S assay had better amplification and sequence quality and no recovery of insect vector DNA. Attempts to improve the cytB assay (e.g., higher annealing temperature) were unsuccessful, leading us to try the 12S assay, which had a smaller amplicon size and higher primer specificity for vertebrate DNA (13). Only mouse DNA was detected from the control bug that had fed on mouse in the laboratory (2), demonstrating the cytB assay worked well for fresh blood meals; however, for degraded DNA, 12S is a better assay.

Overall, cytB is more variable than 12S, producing more haplotypes, and thus can detect feeding on multiple individuals of the same taxon. Because identifying the source of blood meals depends on the availability of similar sequences in GenBank, another advantage of cytB is that GenBank contains 3–4× as many vertebrate sequences for comparison.

In conclusion, although allergic reaction from triatomine bites is well known (12), the high incidence of human blood meals in these bugs in our study suggests that the potential for human transmission of T. cruzi parasites might be greater than previously thought. Our assays using vertebrate primers and cloning PCR products may be especially useful for detecting unpredicted blood meal sources and multiple blood meals.

Dr Stevens is professor of biology at the University of Vermont. Her research interests include feeding sources and population genetics of triatomine vectors in North, Central, and South America.

Part of this material is based on work supported by the National Science Foundation under core faculty funding from grant no. NSF EPS-0701410 (to L.S.) and National Institutes of Health grant 1R15 A1079672-01A1 (to P.L.D.). All procedures using mice were first approved by the Southwestern Biological Institute Animal Care and Use Committee.

Page created: March 14, 2012
Page updated: March 14, 2012
Page reviewed: March 14, 2012
The conclusions, findings, and opinions expressed by authors contributing to this journal do not necessarily reflect the official position of the U.S. Department of Health and Human Services, the Public Health Service, the Centers for Disease Control and Prevention, or the authors' affiliated institutions. Use of trade names is for identification only and does not imply endorsement by any of the groups named above.