Endemic (nonvenereal) syphilis is relatively common in nonindustrialized regions of the world. We describe a case of local transmission in Canada and review tools available for confirming a diagnosis. Improved molecular tools and global clinical awareness are needed to recognize cases of endemic syphilis imported to areas where it is not normally seen.

Treponema pallidum subsp. endemicum is the causative agent of endemic syphilis, also called nonvenereal syphilis. Other diseases caused by nonvenereal treponematoses are yaws (T. pallidum subsp. pertenue) and pinta (T. carateum). The 3 diseases are a substantial cause of illness in the nonindustrialized world, but they are rarely encountered in industrialized areas. Endemic syphilis is encountered in dry, hot regions, including Sahelian areas of western Africa and parts of Botswana, Zimbabwe, and the Arabian Peninsula (1–4). The causative organism is transmitted by direct contact with secretions from lesions or on fomites. The clinical spectrum of these diseases involves various degrees of involvement of the skin, mucous membranes, and skeletal system, depending on the organism (1,2,5,6).

In February 2011, a 1-year-old girl was referred to our infectious diseases clinic for assessment of skin lesions. The patient had a history of several flesh-colored papules on her forehead at 2 months of age and on other areas of her body (hands, wrists, axilla, and anus) over the next several months. One week before our assessment, she began a 5-day course of azithromycin. Improvement in the lesions and resolution of an oral ulcer were reported by the parents at the assessment. The child appeared well. On examination in our clinic, flesh-colored papules were found on her right hand, wrist, and right axilla. A 1-cm condylomatous perianal lesion was also seen. The remainder of her examination findings were normal. Serologic screening for antibodies to T. pallidum was performed by using the Venereal Disease Research Laboratory (VDRL) test, which resulted in a 1:32 dilution, and the T. pallidum particle agglutination (TP-PA) assay of 4+ reactivity. Long bone radiographic results were normal.

The patient was born in Winnipeg, Canada, to a 39-year-old woman after a non-eventful pregnancy. The mother’s antenatal serologic results were negative for HIV and hepatitis B, and for syphilis by negative VDRL and TP-PA test results. The family lived in a refugee camp in the Republic of Senegal for 20 years before immigrating to Canada in November 2009. Review of laboratory records and discussions with public health services revealed that most of the family members had VDRL and TP-PA tests at a community clinic in early 2010 for unknown reasons, but they were lost to follow-up. The clinic was permanently closed and records were not available. The family had not traveled nor received visitors from overseas since moving to Canada.

We assessed all family members. Results of their examination and testing are described in Table 1. The patient’s 3-year-old brother had a 2-month history of progressive drooling and a hoarse voice. On examination, a 2 cm–diameter ulcer with raised edges and friable appearance was noted on the inside of his lower lip. He had a hoarse cry when agitated and drooled excessively, and he had palpable bilateral cervical lymphadenopathy. The remainder of his physical examination showed no abnormalities. His VDRL test result was positive at a 1:32 serum dilution, as was TP-PA with 4+ reactivity. PCR was performed on swab specimens from oral lesions by using previously described protocols (7) to detect the presence of 3 T. pallidum genes: bmp, polA, and tpp47. All 3 genes were detected.

To determine whether the 3-year-old boy was infected with venereal syphilis or for nonvenereal T. pallidum, PCR was performed on a sample. The acidic repeat protein (arp) gene was amplified from the clinical specimen by using PCR primers and conditions as described (8). DNA sequencing of the purified PCR amplicons showed that the arp gene contained a central region of eight 60-bp repeats; all repeats contained identical nucleotide sequences (GenBank accession no. JN674561). The translated amino acid sequence, REVEDVPKVVEPASEREGGE, is characterized as a Type II repeat motif and has been described only in arp genes from nonvenereal T. pallidum subspecies (8,9). 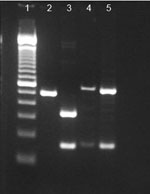 Figure. . . BsrDI digest of tprI and BsrDI/BsEI double digest of tprC from the oral ulcer swab specimen and the syphilis control strain Nichols. Lanes from left to right: 1, 100-bp...

To characterize the tprI gene, PCR amplicons were digested with the restriction enzyme BsrDI (New England Biolabs, Pickering, Ontario, Canada). The tprI gene from the clinical specimen was digested into 2 fragments of 334 bp and 159 bp (Figure), whereas tprI amplicons from the syphilis control strain were not digested and remained as a single band of 493 bp. DNA sequencing of the tprI gene from the clinical specimen confirmed the presence of a BsrDI site (NN/CATTGC at position 1759–1766), which is typical for T. pallidum subsp. endemicum; no restriction site was observed in the syphilis control strain or in GenBank sequences for T. pallidum subsp. pertenue (Table 2).

We suspect the 1-year-old child acquired her infection through close contact with her 3-year-old brother and other siblings, who themselves acquired endemic syphilis while in the Republic of Senegal. The use of molecular techniques greatly assisted in confirming the clinical diagnosis.

Control programs of the World Health Organization and the United Nations Children’s Fund using long-acting penicillin helped reduce the incidence of endemic syphilis and yaws by ≈95% during the 1950s and 1960s. Unfortunately, changes in the administration and delivery of these programs led to an increase in the prevalence of nonvenereal treponematoses during the 1970s (2,5,6). A risk remains for importation of disease into areas where it is not endemic and, subsequently, for local transmission of the etiologic agent.

Diagnosis of imported cases and cases resulting from local transmission is confounded by a lack of experienced clinicians in the diagnosis of nonvenereal treponematoses, and the inability of serologic methods to differentiate these disease entities from venereal syphilis and from each other. Definitive diagnosis is also hampered by widespread unavailability of molecular diagnostics. This deficit necessitates an integrated effort to offer a reproducible reference service to all care providers in a timely and reliable manner to ensure the best clinical outcome, as well as appropriate follow-up for infection control and public health purposes.