Culicoids as Vectors of Schmallenberg Virus

To the Editor: In autumn 2011, an unidentified disease of livestock was reported on both sides of the Dutch–Germany border. By using metagenomics, the etiologic agent of this disease was identified as a novel orthobunyavirus and named Schmallenberg virus (SBV) (1). Other members of the genus Orthobunyavirus (e.g., Akabane virus) are widespread in Africa and Asia; biting midges (Culicoides spp.) and mosquitoes are responsible for transmitting these viruses. Hence, we reasonably assumed that European culicoids might be responsible for transmitting SBV within Europe. We present evidence that culicoids captured October 2011 in Denmark contained SBV RNA and most likely are vectors for this agent. 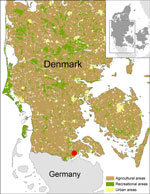 In autumn 2011, culicoids were collected from several sites within Denmark. One site, a chicken farm in Hokkerup (Figure A1), was selected for study because of its location close (6 km) to the German border and proximity (<10 km) to an SBV-infected sheep farm in Germany, as reported on March 9, 2012, by the Friedrich Loeffler Institute surveillance website (www.fli.bund.de). The culicoids were collected during October 14–16 by using a Mosquito Magnet Independence trap (Mosquito Magnet, Lititz, PA, USA) baited with carbon dioxide and octenol. Midges were sorted manually into 91 specimens of the C. obsoletus group (comprising C. obsoletus, C. chiopterus, C. dewulfi, and C. scoticus) and 17 of the C. punctatus sensu stricto group, then stored at −20°C.

Pools of culicoids were homogenized in water (100 µL) by using a 3-mm stainless steel bead (Dejay Distribution Ltd., Launceston, UK) in a TissueLyser II (QIAGEN, Hilden, Germany) for 1 min at 25 Hz (2). After homogenization, additional water (100 µL) was added to the samples, and then the mixture was centrifuged at 3,000 × g for 5 min. Nucleic acids were extracted from the supernatant (100 µL) by using a MagNA pure LC Total Nucleic Acid Isolation Kit on a MagNA pure LC (Roche Diagnostics, Basel, Switzerland) and eluted in water (50 µL).

Figure. . . RNA extracted from pools of Culicoides obsoletus group midges was tested in 1-step reverse transcription quantitative PCRs (RT-qPCRs) for the Schmallenberg virus large segment, and the products were analyzed...

Two of 22 pools tested strongly positive for the large (L) and small (S) segments of SBV RNA. Each positive sample was derived from 5 midges of the C. obsoletus group. One pool produced cycle threshold (Ct) values of 26.4 and 24.5 (in the L segment– and S segment–specific assays, respectively), whereas the second positive pool gave Ct values of 28.8 (L segment) and 27.6 (S segment). These pools were negative for the internal endogenous control that targeted the bovine/ovine β-actin mRNA. This result makes it unlikely that the detection of SBV RNA within the midges resulted from recent blood meals from infected animals remaining within the culicoids and suggests the virus has replicated within the midges. The PCR amplicons (145 bp; Figure) from the L segment–specific RT-qPCR were sequenced by using BigDye 1.1 chemistry on an ABI 3500 Genetic Analyzer (Applied Biosystems, Foster City, CA, USA). The sequences of 80 bp from the amplicons, excluding the primer sequences, had 100% identity with the expected region of the SBV segment L (1).

Reported Ct values generated by using the same assays from blood of naturally infected cattle were 24–35 (1). Usually, ≈100 µL of bovine/ovine blood is used for virus detection, whereas <1 µL of blood remains in a midge after a blood meal. This uptake of blood should therefore lead to a Ct value that is at least 6–7 units higher (≈100-fold lower level of RNA) when a single midge is tested by RT-qPCR (4). Thus, even if all 5 culicoids in a pool had recently taken a blood meal from a viremic animal, the Ct values observed here strongly suggest replication of SBV within the C. obsoletus group midges. However, in principle, other hosts of SBV could have a much higher level of viremia than cattle and could provide the levels of SBV RNA detected. C. punctatus s.s. midges cannot be ruled out as a possible vector of SBV because of the limited number of insects tested.

We gratefully acknowledge the provision of protocols for the RT-qPCRs for SBV RNA by Martin Beer and Bernd Hoffmann. We also thank Helle Rasmussen and Janne Holm Hansen for excellent technical assistance.

Vector collections were funded by the Danish Veterinary and Food Administration as part of a national arthropod mapping project, and the studies were supported within a Green Development and Demonstration Programme and the European Research Area Network Emerging and Major Infectious Diseases of Livestock–funded project by The Ministry of Food, Agriculture and Fisheries.

Culicoids as Vectors of Schmallenberg Virus