Demographic Shift of Influenza A(H1N1)pdm09 during and after Pandemic, Rural India

Population-based active surveillance in India showed higher incidence rates for influenza A(H1N1)pdm09 among children during pandemic versus postpandemic periods (345 vs. 199/1,000 person-years), whereas adults had higher rates during postpandemic versus pandemic periods (131 vs. 69/1,000 person-years). Demographic shifts as pandemics evolve should be considered in public health response planning.

Influenza epidemics and pandemics has been recognized for centuries (1,2), and the effects that influenza can have on public health infrastructure were demonstrated globally during the 2009–2010 pandemic (3). The dynamics of influenza transmission are dependent on many factors, including probability of infection, susceptible populations within age groups, and close contacts between susceptible and infected persons (4,5). Data from 3 recent influenza pandemics show that school-aged children have the highest disease rates and may serve as a key source of transmission to adults (2,6–8).

All residents of 3 villages in Ballabgarh (n = 16,861) in Haryana, India, have been under weekly household surveillance for febrile ARI since November 2009 as part of a clinical trial of seasonal inactivated trivalent influenza vaccine in children 6 months–10 years of age (NCT00934245; www.clinicaltrials.gov); 95% of eligible children were recruited for this trial (Table 1). Information on febrile ARI, which consists of reported fever plus any respiratory complaint (e.g., cough, sore throat, nasal congestion, runny nose, earache, or difficulty breathing), was collected for all household members either by self-report or by proxy by trained field workers. Consent was obtained from all participants.

During November 2009–October 2010, of the 12,896 eligible persons with febrile ARI, samples were collected from 10,002 (78%); missing samples were because those persons were not available for testing at the time of home visit. Throat and nasal swab specimens were collected from all available febrile ARI patients and tested by using real-time reverse transcription PCR (10). Incidence rates (IRs; reported as per 1,000 person-years) and corresponding 95% CIs were calculated for the peak periods of influenza circulation. The pandemic period was defined as November 2009–January 2010 and the postpandemic period as August–October 2010 (first postpandemic period). The Institutional Review Boards of All India Institute of Medical Sciences, University of Alabama, and Centers for Disease Control and Prevention approved the study. Informed consent was obtained for all persons included in the study. 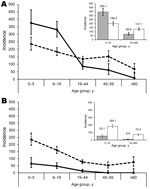 IRs for pH1N1 were higher for children 0–5 and 6–18 years of age (IR 375 and 331, respectively) than for adults (IR 8–86) during the pandemic period (Table 2). The differences in IRs of pH1N1 across age groups disappeared during the postpandemic period, however, this occurred primarily because of a decrease in IRs among the 0- to 5- and 6- to 18-year-old age groups (incidence rate ratio [IRR] 0.6) and concurrent increases among older age groups (IRR 1.6–8.7). These changes were statistically significant (p<0.0001; Figure 2, panel A). The overall IR for influenza B was higher during the postpandemic period; IR for influenza B remained higher for children <18 years of age regardless of pandemic period (Figure 2, panel B).

Data from this large-scale, community-based, prospective surveillance program demonstrated that the introduction of the pH1N1 strain into a naive population in northern India initially affected preschool- and school-aged children during the first phase of the pandemic, with a demographic shift to adults during the postpandemic phase. The analysis has several unique characteristics. By chance, the study began soon after the emergence of pandemic influenza in northern India, which enabled the analysis of pandemic and postpandemic periods in the same study population; we were able to measure incidence of pandemic and influenza B cocirculating in the community. Because we used active surveillance, we likely captured most febrile ARI cases among all age groups, and therefore our results likely are robust and unbiased. If similar patterns occurred during future pandemics in other (e.g., urban) populations, interventions should be redirected from children to adults during the postpandemic phases.

Our study has several limitations. First, the population under surveillance during the pandemic was relatively small because of phased enrollment during the initial study implementation and not all febrile ARI case-patients could be sampled; these effects were corrected by using the person-time method for calculating IRs. However, we recognize that febrile ARI case-patients who were not sampled may have had milder disease, and, therefore, influenza rates may vary. Second, the IRs of pH1N1 reported during the pandemic period may be underestimates because the initial pandemic peak in nearby areas was observed during August 2009, with highest positivity rates for those 6–18 years old (11). Third, while no routine influenza vaccination program exists in this community, the incidence rates for pH1N1 among children may have been skewed because of protection afforded by seasonal influenza trivalent vaccination, administered during November 2009 (13–15). However, the effect, if any, of this vaccination on influenza B incidence has not been determined.

Despite these limitations, we believe that the age-specific demographic shift we observed for the 2009 influenza pandemic will be useful for future modeling projects addressing this issue. Future pandemic preparedness activities should focus on targeted interventions for different age groups as the pandemic evolves, as well as on the severity of disease in different age groups.

Dr Broor is professor of microbiology in the virology section of the All India Institute of Medical Sciences, New Delhi. Her research interests include respiratory viruses, chikungunya virs, dengue virus, noroviruses, and virus diagnostics.

The study was supported in part by cooperative agreement U01 IP000177 from the Centers for Disease Control and Prevention, Atlanta, Georgia, USA.

Page created: August 16, 2012
Page updated: August 16, 2012
Page reviewed: August 16, 2012
The conclusions, findings, and opinions expressed by authors contributing to this journal do not necessarily reflect the official position of the U.S. Department of Health and Human Services, the Public Health Service, the Centers for Disease Control and Prevention, or the authors' affiliated institutions. Use of trade names is for identification only and does not imply endorsement by any of the groups named above.

Demographic Shift of Influenza A(H1N1)pdm09 during and after Pandemic, Rural India