In 2011, an outbreak of illness caused by Yersinia enterocolitica O:9 in Norway was linked to ready-to-eat salad mix, an unusual vehicle for this pathogen. The outbreak illustrates the need to characterize isolates of this organism, and reinforces the need for international traceback mechanisms for fresh produce.

Yersiniosis, a notifiable disease in Norway, is the fourth most common cause of acute bacterial enteritis registered by the Norwegian Surveillance System for Communicable Diseases. Approximately 30 domestic cases are reported annually (2010 incidence rate 0.5 cases/100,000 population). In Norway, >98% of cases of Yersinia enterocolitica infection are caused by serotype O:3, which is also the dominant serotype in Europe, Japan, and parts of North America (1). Infection by Y. enterocolitica is often associated with ingestion of pork because pigs commonly harbor the pathogenic serotypes O:3 and O:9 (1). Recent foodborne outbreaks have been associated with pork products (2,3) and pasteurized milk (4).

In Norway, fecal specimens from patients who have acute gastroenteritis are routinely tested for the presence of Y. enterocolitica. Presumptive Y. enterocolitica O:3 and O:9 isolates are sent by primary laboratories to the National Reference Laboratory (NRL) at the Norwegian Institute of Public Health, where they are routinely verified, serotyped against a range of O antisera, biotyped if relevant, and tested for Yersinia virulence plasmid (pYV). If the strains are pathogenic Y. enterocolitica, they are typed by use of multiple-locus variable-number tandem repeat analysis (MLVA), using multicolor capillary electrophoresis (5). In March 2011, a multidisciplinary investigation was initiated after the NRL received 5 isolates of Y. enterocolitica O:9 from humans in disparate areas of the country. All had an identical MLVA profile, which had not been previously seen in Norway. An international request for information produced no reports of similar outbreaks. 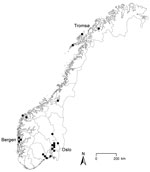 A confirmed case-patient was defined as a person in Norway after January 1, 2011, who had laboratory-confirmed Y. enterocolitica O:9 infection that matched the MLVA profile of the outbreak strain. By May 5, the NRL had registered 21 outbreak case-patients (median age 37 years [range 10–63 years]), of whom 15 were female. Case-patients resided in 10 geographically dispersed municipalities throughout the country (Figure 1). Most case-patients became ill during February 7–March 20 (Figure 2).

In the univariate analysis, ready-to-eat salad mix, diced ham, chicken breast, and arugula were statistically associated with illness (Table). Diced ham and chicken breast were rejected as likely sources of infection because the case-patients reported eating different brands purchased at different stores. Because arugula was an ingredient in the salad mix in question, it was not possible to otherwise distinguish it in the univariate analysis from the salad mix itself. The only food item that remained significant in the final multivariable model was salad mix. Sixteen of the identified case-patients reported having eaten salad mix.

We traced the suspected salad mix to a single Norwegian company. Under the auspices of the Norwegian Food Safety Authority, we conducted an environmental investigation, including a traceback investigation and a review of production and cleaning procedures at the company. The suspected salad mix contained 4 salad green types: arugula, radicchio rosso, iceberg lettuce, and endive. These ingredients came, unprocessed, from 12 suppliers in 2 European countries. After delivery to the company in Norway, the greens were washed in 2 cold water baths, cut, and packaged. We found no indications of inadequate routines for ingredient control, hygiene, or sampling within Norway. We identified radicchio rosso, a leaf chicory, as the likely source of infection because it can be stored for several months and was the only ingredient included in the suspected salad mix that had delivery, production, and storage dates consistent with the outbreak period. The company in Norway traced the radicchio rosso to 1 of 3 possible growers in 1 European country but was not able to identify the source of contamination. The Norwegian company voluntarily withdrew all salad mixes containing radicchio rosso from the market. After withdrawal of the implicated ingredients, no new outbreak cases were reported.

We collected 37 food samples from the homes of case-patients, retail locations, and the company that processed the salad mix products and analyzed them at the Norwegian Veterinary Institute. We cold-enriched all samples for 21 days and analyzed them according to conventional culture methods. Using PCR, we examined all enriched broths and isolated colonies for the ail gene, an indicator of pathogenic Y. enterocolitica that was found in the outbreak strain (6,7) (www.nmkl.org/kronologisk.htm). We cultured Y. enterocolitica–positive samples to isolate Yersinia colonies. We isolated presumptive Yersinia spp. from 11 of the salad ingredients, including 2 strains that were consistently positive for the ail gene and that were isolated from mixed salad and radicchio rosso samples obtained directly from the company. All of the specimens were sent to the NRL for characterization to the species level, biotyping, serotyping, and testing for pYV. The isolate found in the mixed salad sample was Y. enterocolitica biotype 1A. It did not agglutinate in antiserum 0 through 34 and was pYV negative, whereas the radicchio rosso isolate was identified as Y. kristensenii and agglutinated in O:11,24 antiserum.

This outbreak of Y. enterocolitica was associated with ingestion of ready-to-eat salad mix. Despite a thorough traceback investigation, the likely source of contamination for the outbreak, radicchio rosso, remains unproved. As found in many outbreaks linked to salad products (8–10), more women were affected than men or children. The outbreak was detected rapidly through systematic characterization of Y. enterocolitica isolated from humans to a level that enabled identification of an outbreak of non-O:3 Y. enterocolitica infections, which were linked by MLVA. Few European countries regularly type Y. enterocolitica, which might explain why international requests for information produced no similar reports from other countries.

The necessity of epidemiologic, environmental, and traceback investigations in addition to microbiological investigation in outbreak situations cannot be underestimated. Considering the increasing number of outbreaks associated with fresh produce, improving traceback among these products should be emphasized. Despite the ultimately inconclusive traceback investigation, this outbreak shows the value of targeted surveillance and microbiological typing as a means for quickly identifying and investigating small foodborne disease outbreaks with international implications.

Ms MacDonald is an advisor in the Department of Infectious Disease Epidemiology at the Norwegian Institute of Public Health in Oslo, Norway. Her research interests include outbreak investigation and event-based surveillance.

We gratefully acknowledge the municipal health authorities and the employees of the microbiological laboratories at the community level in the affected areas who participated in the outbreak investigation; the personnel at the district, regional, and national levels of the Norwegian Food Safety Authority for conducting interviews with case-patients, collecting food samples, and collaborating on the international investigation; and the laboratory personnel of the Norwegian Veterinary Institute and Norwegian Institute of Public Health for performing the microbiological characterization and typing of human and food samples.