To the Editor: Picobirnaviruses (family Picobirnaviridae) are nonenveloped, double-stranded RNA viruses of vertebrates with a bisegmented genome. Segment 1 (2.2–2.7 kb) encodes the capsid protein, and segment 2 (1.2–1.9 kb) encodes the RNA-dependent RNA polymerase. On the basis of sequence diversity in segment 2, picobirnaviruses are classified into 2 genogroups (1–4). Picobirnaviruses have been detected in fecal samples from humans with and without gastroenteritis; in patients co-infected with known enteric pathogens, including rotaviruses, caliciviruses, and astroviruses (1,4); and in a wide range of animals, such as pigs, calves, dogs, monkeys, and snakes. The pathogenicity of picobirnaviruses largely remains to be determined, but studies in immunocompromised persons suggest that picobirnaviruses may be opportunistic enteric pathogens (5,6). 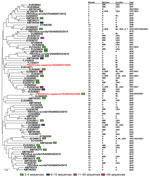 This work was partially funded by the European Community's Seventh Framework Program (FP7/2007–2013) under the project “European Management Platform for Emerging and Reemerging Infectious Disease Entities” European Commission agreement no. 223498 and the Virgo Consortium, funded by the Dutch government project no. FES908 and by the Netherlands Genomics Initiative project no. 050.

Page created: August 22, 2012
Page updated: August 22, 2012
Page reviewed: August 22, 2012
The conclusions, findings, and opinions expressed by authors contributing to this journal do not necessarily reflect the official position of the U.S. Department of Health and Human Services, the Public Health Service, the Centers for Disease Control and Prevention, or the authors' affiliated institutions. Use of trade names is for identification only and does not imply endorsement by any of the groups named above.