A new clonal strain of Candida auris is an emerging etiologic agent of fungemia in Delhi, India. In 12 patients in 2 hospitals, it was resistant to fluconazole and genotypically distinct from isolates from South Korea and Japan, as revealed by M13 and amplified fragment length polymorphism typing.

In 2009, yeast isolates from the external ear canal of a Japanese patient were identified as a new species, Candida auris, on the basis of sequence analysis of the nuclear rRNA gene. The species is phylogenetically related to C. haemulonii (1). In the same year, 15 isolates of C. auris were reported from otitis media patients in South Korea (2). Genotyping of these isolates revealed a clonal origin (3). In addition, in 3 patients, persistent fungemia caused by C. auris was resistant to fluconazole; 2 of these patients died (4). Fungemia caused by C. auris seems to be extremely rare, however. We report a series of fungemia cases caused by a new clonal strain of this emerging pathogen, involving 12 inpatients from 2 hospitals in Delhi, India. 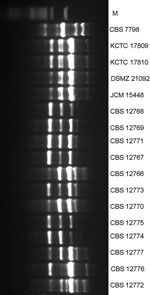 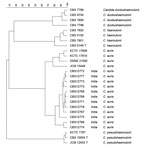 M13 PCR fingerprinting analysis was performed as described (8,9). The isolates from India had a distinct banding pattern in relation to isolates from Japan and South Korea. Except for 2 isolates (CBS 12772, CBS 12776), the C. auris isolates showed an identical banding pattern, suggesting a single genotype (Figure 1). The isolates’ genotypic diversity was also determined by using amplified fragment length polymorphism (AFLP) fingerprint analysis (10). In a dendrogram in which standard Pearson and UPGMA (unweighted pair group method with averages) settings were used, C. auris isolates clustered separately from C. haemulonii, C. duobushaemulonii, and C. pseudohaemulonii. The C. auris isolates from India showed a clonal origin and were genotypically distinct from the isolates from Japan and South Korea (Figure 2).

Clinical features of the infections and response to antifungal therapy of the 12 patients with fungemia are summarized in the online Technical Appendix Table (wwwnc.cdc.gov/EID/article/19/10/13-0393-Techapp1.pdf). Each patient had at least 3 predisposing risk factors. Seven had immunosuppressive conditions: 6 (50%) had diabetes mellitus, 5 (42%) had chronic kidney disease, 2 (17%) had undergone cancer chemotherapy, and 1 (8%) was infected with HIV. Of the 5 children, 3 were infants of low birthweight, 1 neonate had late onset sepsis, and one 10-year-old child had acute lymphoblastic leukemia. Having an indwelling urinary catheter was the predominant risk factor for 83% of patients, followed by receiving broad-spectrum antimicrobial drugs (75%), spending time in an intensive care unit (58%), having neutropenia (50%), and having a central venous catheter (CVC) (42%). Notably, 7 (58%) patients had breakthrough fungemia while receiving fluconazole (1–3 weeks), and persistent candidemia developed in 9 (75%) patients. In 8 of these 9 patients, candidemia cleared after antifungal therapy in 1–3 weeks. For the remaining 3 patients, blood culture reports were available post mortem. C. auris represented 5% of the annual candidemia cases in a pediatric hospital and 30% of annual candidemia cases in a tertiary care general hospital. Overall mortality rates as high as 50% were noted; 30% of deaths were attributed to critical illness.

This study documents the emergence of a new clonal strain of C. auris as an etiologic agent of candidemia in India. Fungemia caused by C. auris is extremely rare, identified only by sequencing. Because diagnostic laboratories do not undertake molecular identification routinely, fungemia is likely to be much more prevalent than published reports indicate. Growth at 40°C may differentiate C. auris isolates, routinely misidentified as C. haemulonii by VITEK. C. haemulonii does not grow at 40°C, as does C. auris (12). Sequencing may confirm their identity.

Although Lee et al. proposed negative assimilation of NAG for differentiating C. auris from C. pseudohaemulonii, this proposal seems invalid because all isolates from India assimilated NAG (4). The phenotypic divergence of these isolates was also supported by M13 and AFLP typing. Notably, C. auris isolates from 2 hospitals in Delhi were clonal, suggesting interhospital transmission. Transmission of the same genotype was observed in intensive care, surgical, medical, oncologic, neonatal, and pediatric wards, which were mutually exclusive with respect to health care personnel. This finding is analogous to that of the clonal transmission of C. auris among 3 hospitals in South Korea (2). Prevalence of a unique clonal strain of C. auris in 2 hospitals in Delhi, 13.5 km apart, underscores the need for more comprehensive studies to determine potential occurrence of other endemic clones in various regions of India.

Because most (83%) of the patients in our study had an indwelling urinary catheter, the source of fungemia could be urogenital colonization. However, no urine samples were cultured. Five (42%) patients had a CVC in situ, but none received total parenteral nutrition. Although Candida spp. adhere to intravascular catheters, providing a potential nidus for infection, a previous study showed that C. auris does not form a biofilm (3). Catheter tip cultures were negative for 3 of the 5 patients who had a CVC. Although 57% of patients admitted to critical care units died, the role of C. auris candidemia in fatal cases could not be ascertained because no comparison was available with a population that did not have candidemia.

C. auris assumes a greater clinical significance for the successful management of candidemia because all the reported isolates, including the new isolates, were fluconazole resistant (2,4). Most patients in this study had persistent candidemia, and mortality rates were as high as 33%.

In conclusion, C. auris is an emerging yeast pathogen that is underreported because it is misidentified in routine diagnostic laboratories. The resistance of C. auris to fluconazole is particularly worrisome.