Influenza A viruses are a threat to poultry and human health. We investigated evolution of influenza A virus H7 and N9 subtypes in wild and domestic birds. Influenza A(H7N9) virus probably emerged after a long silent circulation in live poultry markets in eastern Asia.

Emergence of influenza A(H7N9) virus in China raised concerns about potential virus adaptation to mammals and human-to-human transmission (1,2). Investigations of virus sources and vectors are needed because they will provide useful information about influenza A(H7N9) virus subtype evolution and adaptation processes. Wild waterbirds are natural hosts for influenza A viruses and are sources for introduction of virus into poultry, in which the viruses adapt and sometimes evolve toward increased virulence (H5 and H7 virus subtypes). Although H7 subtype influenza A viruses have been isolated from wild birds worldwide, the role of these hosts in emergence, maintenance, and potential intercontinental spread of influenza A(H7N9) virus has not been determined.

We analyzed molecular evolution of H7 (hemagglutinin) and N9 (neuraminidase) subtypes of avian influenza virus. The purpose of this study was to investigate the recent evolutionary history of H7 and N9 virus subtypes in eastern Asia and identify the most recent wild bird ancestor of influenza A(H7N9) virus hemagglutinin and neuraminidase. 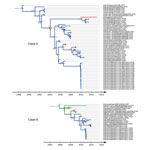 Figure 1. . Maximum clade credibility trees for co-circulating influenza A virus H7 subtype genetic lineages, eastern Asia. A) Clade A. B) Clade B. Values along the branches are posterior probability values >0.8....

This pattern suggests that the old genetic lineage of influenza A virus H7 subtypes that circulated in eastern Asia since 1999 (clade A) may have been progressively replaced by a more recent lineage (clade B). Clustering of clade B viruses with those isolated in Europe suggest that gene flow has recently occurred in Eurasia, probably as the result of waterfowl migrations and poultry trade. However, the European origin of viruses from Asia was not supported on the basis of phylogeographic analysis (Technical Appendix).

Limited epidemiologic and genetic information about influenza A virus H7 subtype circulating in eastern China during 2004–2011 precludes more precise conclusions on origins of human influenza A(H7N9) virus and relatedness to influenza A virus circulating in wild birds. However, on the basis of genetic analyses of recently isolated viruses from chickens, pigeons, and the environment, maintenance and genetic reassortment of emerging influenza A(H7N9) virus might have occurred in live poultry markets in Shanghai, China (5,7).

The phylogenetic structure we observed for influenza A virus subtype N9 suggests that gene flow has occurred since 1996 among Europe, Africa, Asia, and Oceania (Figure 2; Technical Appendix). Analyses showed circulation of influenza A virus subtype N9 (mainly H11N9 subtype) (Figure 2) in eastern Asia since 2003, and evidence of virus dispersal to Europe and Australia and reassortments with hemagglutinin of avian influenza virus subtypes H5, H6, and H7. Consistent with results of other studies (1,2,5,6), we found that neuraminidase of A/Hangzhou/1/2013(H7N9) virus was closely related to that of A/wild bird/Korea/A3/2011(H7N9) virus (9). However, our estimate of the time of the most recent common ancestral influenza A virus between these 2 viruses was earlier (2008) than suggested (6).

This study was supported by the National Institute of Allergy and Infectious Diseases, National Institutes of Health (contract no. HHSN266200700007C), and the European Union Seventh Framework Programme (FP7/2007–2013) under grant no. 263958 (RUN-Emerge Project).