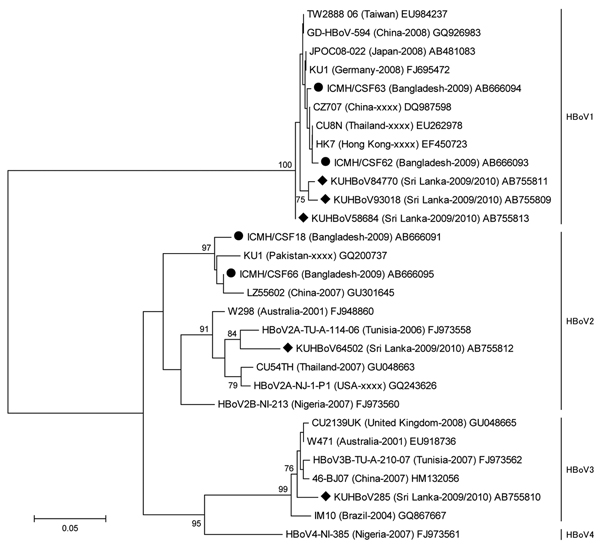 Figure. . Phylogenetic tree of the partial VP 1/2 gene (nucleotide positions 3233–3808, amplicon size 575 bp) of HBoVs constructed by using nucleotide sequence by neighbor-joining method. The strain name is followed by country of origin and year of sample collection in parentheses, followed by the DDBJ/EMBL/GenBank accession no.; xxx indicates that the year of sample collection is undocumented. Sri Lanka and Bangladesh encephalitis-causing bocaviruses are indicated by circles and diamonds, respectively. The number adjacent to the node represents the bootstrap value, and values <70% are not shown. Scale bar indicates genetic distance expressed as nucleotide substitutions per site. (The DDBJ/EMBL/GenBank accession numbers of nonstructural protein 1 gene of strains KUHBoV93018, KUHBoV285, KUHBoV84770, KUHBoV64502 and KUHBoV58684 were AB822999, AB823000, AB823001, AB823002 and AB823003, respectively).