Transmission of Brucellosis from Elk to Cattle and Bison, Greater Yellowstone Area, USA, 2002–2012

Bovine brucellosis, caused by Brucella abortus, is a global zoonotic disease primarily infecting cattle, in which it produces abortions, retained placentas, male reproductive tract lesions, arthritis, and bursitis. In humans, brucellosis can cause recurrent fever, night sweats, joint and back pain, other influenza-like symptoms, and arthritis. In animals and humans, it can persist for long periods. During the 1930s, a state–federal cooperative effort was begun to eliminate the disease from livestock in the United States. From an initial estimated prevalence in 1934 of ≈15%, with nearly 50% of cattle herds having evidence of infection (1,2), the United States now has no known infected livestock herds outside of portions of Idaho, Wyoming, and Montana, adjacent to Grand Teton and Yellowstone National Parks. This area, referred to as the Greater Yellowstone Area (GYA), also encompasses state and federal feeding grounds in Wyoming where elk are fed during the winter. Considered a spillover disease from cattle to elk and bison, brucellosis now regularly spills back from elk to cattle. Although bison-to-cattle transmission has been demonstrated experimentally and in nature (3,4), it has not been reported in the GYA, probably because of ongoing rigorous management actions to keep cattle and bison spatially and temporally separated.

In 1992, a court case highlighted the potential for transmission of brucellosis from free-ranging wildlife to livestock in the GYA. The litigation concerned brucellosis transmission purportedly from elk or bison to 2 cattle herds in 1988 and 1989 (5). Before those incidents and since ≈1961, brucellosis had been detected in 4 GYA cattle herds, and transmission was attributed to a wildlife source on the basis of epidemiologic investigations (6). From 1990 through 2001, no brucellosis was found in any GYA livestock despite intensive surveillance in some areas, precipitated by court action. We report a series of recent cases in which brucellosis was transmitted from free-ranging elk to domestic cattle or ranched bison as determined by epidemiologic and microbiological investigations.

During April 2002–April 2012, brucellosis was discovered in 13 beef cattle herds and 4 ranched bison herds in the GYA (Figure 1). Additionally, from comingling of cattle herds at the time of transmission and transfer of ownership of some animals between infection and detection, 3 more infected cattle herds were identified. In each of the 17 herds, infection was detected by serologic testing and confirmed by culture of tissues collected at slaughter of >1 animals. The source of infection of each cattle or bison herd was determined through extensive epidemiologic investigations by state and federal animal health authorities. These investigations included serologic testing of all cattle herds adjacent to or in contact with the infected herd, testing of all herds from which the infected herds had received animals in the preceding years, interviews with owners and managers to determine the history of comingling with wildlife, and comparison of DNA test results of the isolates with those from wildlife and domestic animals. The transmission event in 2002 was previously reported (7).

Cattle and bison herd sizes varied from <50 to >300 animals, and seroprevalence ranged from 0.2% to 20% (Table). For 8 herds, infection initially was detected through required testing of cattle going through markets or to slaughter. Four infected herds were detected by routine testing because of the location of herds in the brucellosis-endemic area, 1 herd was detected because of testing of area herds in proximity to a previously infected herd, and 4 herds were detected by testing required for interstate transport or change of ownership. 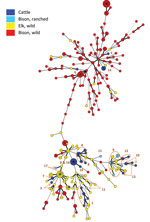 Examination of the data from these herds reveals several facts. With few exceptions, herds had low seroprevalence at time of detection (14 of 17 herds: <10%; 11 of 17 herds: <3%). Additionally, few or no abortions were reported by herd owners or managers. These findings probably are due to rigorous surveillance and the widespread use of vaccination in GYA herds. The attenuated live vaccine, strain RB51, is efficacious in decreasing abortions but does not prevent infection (9). The herd with highest seroprevalence (herd no. 4) had the lowest percentage of vaccinated cattle (41%). Nearly all animals in other herds had received calfhood vaccination. In several cases, management actions may have increased risk for exposure (i.e., allowing elk to feed with cattle and placing cattle in pasture with elk during late winter or spring). In Wyoming and Idaho, proximity to elk feeding grounds varied. With 1 exception (herd no. 7), owners or investigators reported that elk were sharing the premises with cattle. Herd no. 7’s owner and his son were employed at a nearby elk feeding ground, where their duties included removal of elk fetuses, which created the potential for transmission through fomites. Information obtained from state wildlife agencies indicated that in every transmission case, serologic surveillance of elk in the area showed some level of infection in that species. On the basis of the 10-loci variable number tandem repeat assay, the B. abortus isolates recovered from cattle and farmed bison are very closely related to—and sometimes indistinguishable from—isolates from wild elk (Figure 2).

Several factors are likely to have contributed to changes in elk distributions and the resulting increases in brucellosis in some populations and its transmission to livestock. These include population and density increases (11,12), changes in land management that created safe havens for elk (13), and reintroduction of wolves to the GYA (14). Other factors that might have had local or general effects include climatic and snowfall changes (15), reduction of habitat by urbanization, and increased use of motorized backcountry vehicles. Changes in elk and cattle brucellosis surveillance during the last decade do not account for the disease spread in elk or increased transmission to livestock.

If brucellosis continues to increase among free-ranging elk populations remote from feeding grounds, the area to which brucellosis is endemic is likely to expand and the risk for transmission to livestock and the public will increase, in part reversing the hard-fought gains of the past 75 years in eliminating the disease in the United States. Gaining a better understanding of ecologic and sociologic changes in the GYA and their impact on the epidemiology of this wildlife–livestock–human interface disease is essential to developing effective management strategies.

Dr Rhyan is a veterinary pathologist and head of the Veterinary Services Wildlife/Livestock Disease Investigations Team at the National Wildlife Research Center, Fort Collins, Colorado. His primary research interests include pathogenesis, epidemiology, and management of diseases at the wildlife–livestock–human interface.

Transmission of Brucellosis from Elk to Cattle and Bison, Greater Yellowstone Area, USA, 2002–2012