Macrolide and rifampin resistance developed on a horse breeding farm after widespread use was instituted for treatment of subclinical pulmonary lesions in foals. Resistance occurred in 6 (24%) of 25 pretreatment and 8 (62%) of 13 (62%) posttreatment isolates from affected foals. Drug-resistant isolates formed 2 distinct genotypic clusters.

Rhodococcus equi is a major cause of pneumonia in young horses and a common opportunistic pathogen of immunocompromised humans (1). Over the past decade, control of R. equi infections at many horse farms to which the disease is endemic has relied on early detection of subclinical pulmonary disease by use of thoracic ultrasonography and initiation of treatment with antimicrobial drugs before development of clinical signs (2). This approach appears to have decreased deaths caused by R. equi pneumonia at some farms, although controlled studies are lacking (2). However, the temporal association between widespread use of macrolides and rifampin and a perceived increase in the frequency of detection of drug-resistant isolates in the past decade (3) suggest that this practice may not be innocuous.

We describe emergence of resistance to macrolides and rifampin among R. equi isolates obtained from a horse breeding farm. We conducted this study after initiation of an ultrasonographic screening program on the farm and resulting widespread use of these drugs in foals with subclinical pulmonary lesions.

This study was conducted at a Thoroughbred horse breeding farm in Kentucky, USA. The farm initiated an ultrasonographic screening program in 2001 in an attempt to decrease deaths associated with pneumonia caused by R. equi through early diagnosis and treatment of foals with subclinical lesions. During March–July 2010, the farm reported 9 foals infected with macrolide- and rifampin-resistant R. equi isolates. This finding led to a disease investigation consisting of retrospective data collection (Table 1), collection of air samples in September 2010 to determine the prevalence of drug-resistant R. equi in the environment, and prospective culture of pulmonary lesions from all foals in 2011 before initiation of antimicrobial drug therapy.

A total of 124 air samples were collected from the 4 barns at the farm and from each of their respective surrounding paddocks by using a portable air-sampling device as described (4). For the 2011 breeding season, a tracheobronchial aspirate was collected transendoscopically from each foal that had ultrasonographically detected pulmonary lesions before initiation of therapy by using a triple-guarded microbiological aspiration catheter. A second tracheobronchial aspirate was collected by using the same method 2 weeks after initiation of therapy. Decisions regarding the need for therapy and selection of antimicrobial agents were made by the farm veterinarian and manage.

After standard microbiological culture of air and tracheobronchial aspirate samples, confirmation of R. equi was accomplished by amplification of the choE gene and detection of the virulence plasmid by amplification of the vapA gene by using multiplex PCR (5). For each isolate, the MICs of erythromycin, azithromycin, clarithromycin, and rifampin were determined from 3–5 isolated colonies by broth dilution in accordance with Clinical and Laboratory Standards Institute guidelines (6). R. equi isolates with MIC values <2 µg/mL for azithromycin and clarithromycin, <0.5 µg/mL for erythromycin, and <1 µg/mL for rifampin were considered susceptible, and isolates with MIC values >8 µg/mL were considered resistant.

The similarity of R. equi isolates from air and tracheobronchial aspirate samples was determined by using a repetitive sequence–based PCR (DiversiLab; bioMérieux Inc., Durham, NC, USA) previously validated for R. equi (7). Isolates were clustered as the same strain on the basis of >95% similarity and a difference of <1 band (8).

The ultrasonographic screening program was introduced in 2001, and the first isolates of R. equi resistant to macrolides and rifampin were identified in 2008 (Table 1). There were no R. equi isolates that were resistant to either a macrolide or rifampin alone. Air sampling yielded 82 isolates of R. equi. Of these isolates, 15 (18%) contained the plasmid required for virulence in foals and 67 (82%) were avirulent.

During the 2011 season, 132 foals were born on the farm. Thoracic ultrasonography showed evidence of pulmonary disease in 27 (20%) foals. Culture of a tracheobronchial aspirate before initiation of therapy yielded R. equi in 25 (93%) of the 27 foals sampled (Table 1). Of the 25 pretreatment R. equi isolates, 6 (24%) were resistant to macrolides and rifampin. Twenty-four foals were treated with clarithromycin and rifampin. Tracheobronchial aspirates were collected 2 weeks after initiation of therapy in 19 foals, and R. equi was cultured from 13 (68%) of the 19 samples. Of these 13 posttreatment isolates, 8 (62%) were resistant to macrolides and rifampin. After identification of resistant isolates, 3 foals had a third antimicrobial agent added to their therapy (gentamicin, n = 2; doxycycline, n = 1). All foals with a diagnosis of pneumonia caused by R. equi in 2011 survived. 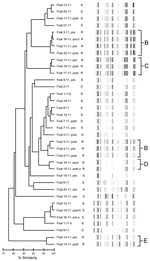 Recently, development of macrolide resistance in clinically relevant pathogens has been recognized in human and animal populations that received intensive macrolide treatment (9,10). We documented that macrolide- and rifampin-resistant isolates of R. equi occurred 7 years after initiation of an ultrasonographic screening program, which resulted in treatment of all foals with subclinical pulmonary lesions.

A recent study on a large horse farm indicated that the proportion of foals with ultrasonographic pulmonary lesions associated with R. equi infection that recovered was not different between foals given azithromycin and rifampin and foals given a placebo (12). This surprising finding, combined with the apparent increase in macrolide- and rifampin-resistance demonstrated in the present study, support the need to stop the practice of mass macrolide treatment for subclinical infection with R. equi in foals on horse breeding farms. The goal should be to more accurately identify, of the many subclinically infected foals, which few are likely to show development of disease and thus require treatment for it.

Dr Burton is a graduate research assistant at the University of Georgia. Her primary research interests include infectious diseases of horses with emphasis on infections caused by R. equi.

We thank Kristen M. Guldbech and Tina Elam for assistance.