Phylogenetic and Ecologic Perspectives of a Monkeypox Outbreak, Southern Sudan, 2005 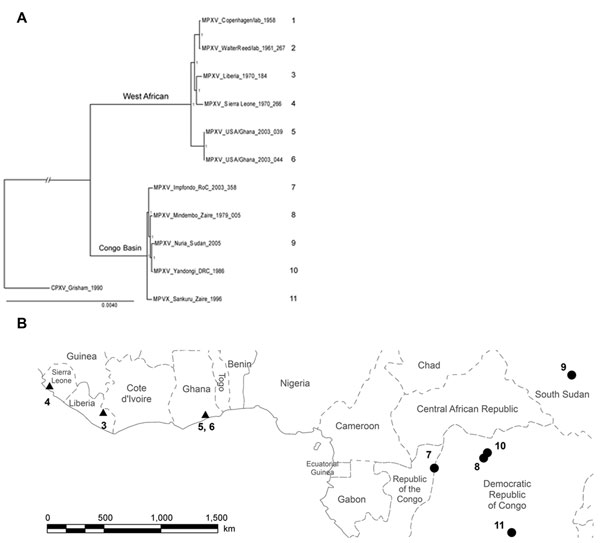 Figure 1. . A) Phylogenetic tree produced from genome sequences (189,830 nt) of the 11 MPXV isolates. The separation between West African and Congo Basin clades is highly supported; the Sudan isolate is included within the Congo Basin clade. Posterior probabilities are indicated by the number 1 at each node. Scale bar indicates nucleotide substitutions per site. B) Map of geographic distribution of the isolates. Numbers correspond to those in Table 1; strains 1, Copenhagen 1958 and 2, Walter Reed 1961, were from laboratory samples and are not represented on the map. 3, Liberia 1970; 4, Sierra Leone 1970; 5, USA/Ghana 2003 039; 6, USA/Ghana 2003 044; 7, Impfondo 2003; 8, Mindembo 1979; 9, Nuria 2005; 10, Yandongi 1986; and 11, Sankuru 1996. Triangles indicate West African clade; circles indicate Congo Basin clade.