Data on the interaction between methicillin-resistant Staphylococcus aureus (MRSA) colonization and clinical infection are limited. During 2007–2008, we enrolled HIV-infected adults in Atlanta, Georgia, USA, in a prospective cohort study. Nares and groin swab specimens were cultured for S. aureus at enrollment and after 6 and 12 months. MRSA colonization was detected in 13%–15% of HIV-infected participants (n = 600, 98% male) at baseline, 6 months, and 12 months. MRSA colonization was detected in the nares only (41%), groin only (21%), and at both sites (38%). Over a median of 2.1 years of follow-up, 29 MRSA clinical infections occurred in 25 participants. In multivariate analysis, MRSA clinical infection was significantly associated with MRSA colonization of the groin (adjusted risk ratio 4.8) and a history of MRSA infection (adjusted risk ratio 3.1). MRSA prevention strategies that can effectively prevent or eliminate groin colonization are likely necessary to reduce clinical infections in this population.

Methicillin-resistant Staphylococcus aureus (MRSA) infections are a substantial cause of illness and a major public health problem (1). Although MRSA was traditionally considered a health care–associated pathogen, it has emerged worldwide as a notable cause of community-associated skin and soft tissue infections (2). In the United States, MRSA pulsed-field gel electrophoresis (PFGE) type USA300 strains have caused most community-associated MRSA infections (3). High rates of community-associated (4–6) and health care–associated MRSA infections have also been described among HIV-infected persons (7), although the underlying basis for this association is unknown. Proposed mechanisms include immune dysfunction (5,7,8), behavioral risk factors (9), and increased exposure to the health care system (10). The prevalence of MRSA colonization among HIV-infected persons is also high (10%–17%) (11,12), compared with that in the general US population (0.8%–1.5%) (13,14). Colonization with S. aureus is a risk factor for subsequent clinical infection (15,16), and the site of colonization may also be an key risk factor (17). For example, although the anterior nares is considered the primary reservoir of S. aureus (18), MRSA PFGE type USA300 might preferentially colonize the buttocks, genitals, and perineum (17), leading to more infections in these anatomical areas. Improving our understanding of the interaction between MRSA colonization and clinical infection among persons with HIV is necessary so that effective prevention strategies can be developed for this population.

At enrollment, data on patients’ demographic characteristics, medical history, and antimicrobial drug use within the past 12 months, and microbiologic data on previous S. aureus infections were obtained from electronic medical records. Participants also completed a questionnaire at enrollment and at 12 months that focused on their living situation, self-reported history of skin infections, personal hygiene, sexual behavior, and drug use over the past 12 months.

At each study visit, specimens for S. aureus culture were collected from the anterior nares and the groin by using sterile rayon swabs and placed in liquid Stuart’s transport media (Becton Dickinson, Sparks, MD, USA). Study staff collected specimens from the anterior nares, and participants were instructed (using a diagram of the human body) to collect specimens from the groin by swabbing in the skin folds between the thigh and genital area. Swabs were plated on mannitol salt agar (Becton Dickinson) and CHROMagar MRSA (Becton Dickinson) and then placed in 5 mL of trypticase soy broth with 6.5% sodium chloride (Becton Dickinson) as described (19,20). At each study visit, participants were classified as MRSA colonized if MRSA was detected from either the nares or groin culture. Participants were classified as colonized with methicillin-susceptible S. aureus (MSSA) if MSSA was detected and MRSA was not detected. Participants colonized with both MSSA and MRSA (regardless of site) were classified as MRSA colonized.

All MRSA isolates were genotyped by PFGE with SmaI (New England Biolabs, Beverly, MA, USA) as described (13,19,20). PFGE patterns were analyzed with BioNumerics Software v 5.10 (Applied Maths, Austin, TX, USA) and were assigned to USA pulsed-field types by using Dice coefficients and 80% relatedness. USA500, Iberian, and Archaic PFGE types were grouped together as USA500/Iberian because they are closely related and difficult to separate by PFGE (21). PCR was used to screen for staphylococcal cassette chromosome mec type and to detect Panton-Valentine leukocidin genes for all isolates (22). USA300 was defined as an isolate with a USA300 PFGE pattern that was positive for Panton-Valnetine leukocidin genes and contained staphylococcal cassette chromosome mec type IVa.

The primary analysis compared participants in whom a MRSA clinical infection developed with those in whom a MRSA clinical infection did not develop. All analyses were performed by using SAS version 9.2 (SAS Institute Inc., Cary, NC, USA). The Wilcoxon rank-sum test (continuous variables) and the χ2 and Fisher exact tests (categorical variables) were used to test for differences in clinical, demographic, and behavioral variables among participants with and without MRSA clinical infection. Statistical significance was indicated by a p value <0.05. By using a multivariate log-linked binomial regression model (Proc Genmod; SAS Institute Inc.) (23), adjusted risk ratios (aRRs), and 95% CIs were calculated to identify variables associated independently with the development of MRSA clinical infection. All statistically significant (p<0.05) variables in univariate analysis (unadjusted RR) were included in a multivariate model (24), and variables with p>0.2 in the adjusted model were dropped sequentially to create a parsimonious model that was examined for goodness of fit after each step. We also evaluated variables in the final parsimonious model with Kaplan-Meier survival methods with corresponding log-rank tests and Cox proportional hazards models (Proc PHREG; SAS Institute Inc.) of time to MRSA clinical infection. 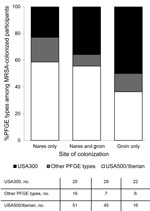 Figure 2. . . Prevalence of methicillin-resistant Staphylococcus aureus (MRSA) recovered from nares and groin swabs of HIV-infected adults at each study visit among participants who had specimens cultured at all 3 visits...

Prior studies have demonstrated that USA300 causes most community-associated MRSA infections in the United States, whereas USA500/Iberian clones are associated with health care–associated MRSA infections (1). This epidemiology, however, is changing (28), and participants in this study had risk factors for both community-associated and outpatient health care–associated MRSA exposures. In this study, USA300 caused most skin and soft tissue infections and was more likely colonize the groin only. Other PFGE types, however, also caused both clinical infections and groin colonization, and PFGE type (USA300 vs. other PFGE types) was not independently associated with risk for MRSA clinical infection. These findings suggest that the presence of MRSA colonization in the groin is more useful clinical knowledge than identifying the PFGE type causing colonization (which is rarely determined in clinical practice anyway).

Our study had several limitations. First, our study population was 98% male and our findings are not generalizable to HIV-infected women. Second, the MRSA epidemic in the United States continues to evolve (7), and new risk factors for MRSA infection in HIV-infected adults may emerge that were not significant in this study. In addition, in our study, some risk factors for community-associated MRSA clinical infections, such as methamphetamine use (9) and close contact with someone with a skin infection, were not associated with MRSA clinical infection. These differences might be explained by low frequencies of certain risk factors (i.e., methamphetamine use) in our study population or a social desirability bias may have limited the full disclosure of drug use and sexual and hygienic behavior. Third, we evaluated 45 variables in univariate analysis and 16 variables in the initial multivariate model before creating a final parsimonious model with 6 variables. Although evaluating an extensive list of potential risk factors for MRSA clinical infection had some advantages, the extensive list also increased variance in the initial multivariate model. Fourth, the optimal sampling (i.e., which sites to swab and how to collect the specimen) and microbiologic techniques to evaluate MRSA colonization in the groin have not been established. Although we used microbiologic techniques that have been demonstrated to improve MRSA detection (19), we may have underestimated the true prevalence of groin colonization. Finally, participants may have had MRSA clinical infections that were not cultured, and these infections would not have been captured by our electronic monitoring of microbiologic records. Therefore, we might have underestimated the true incidence of MRSA clinical infections in this population.

Dr Peters is a medical officer in the Division of HIV/AIDS Prevention at CDC, Atlanta, Georgia. His research interests include HIV-associated infections, such as those caused by MRSA, influenza, and hepatitis B virus.

This publication was made possible by support from the Division of HIV/AIDS Prevention and the Division of Healthcare Quality Promotion, CDC. These data were presented in part at the 48th Annual Infectious Disease Society of America Meeting, Vancouver, British Columbia, Canada, October 21–24, 2010.