A novel strain of influenza A(H7N9) virus has emerged in China and is causing mild to severe clinical symptoms in infected humans. Some case-patients have died. To further knowledge of this virus, we report the characteristics and clinical histories of 4 early case-patients.

Case-patient 1 raised chickens at home. Case-patients 2–4 had no clear history of close contact with poultry; however, each had visited various farmers’ markets that sold live poultry. None of the patients raised pigeons or live in or near a heavily pigeon-infested area.

Before being transferred to SHPHCC on April 6, 2013 (patients 1 and 2) and April 7, 2013 (patients 3 and 4), the 4 patients had been treated in local hospitals; infection with influenza A(H7N9) virus had been confirmed by real-time reverse transcription PCR of nasopharyngeal swab samples before transfer. The case-patients had cough and fever and had been expectorating sputum for ≈6–7 days before admittance to SHPHCC. In addition, all had experienced cold-like symptoms and fatigue before influenza-like symptoms developed. Case-patient 4 had cough and fever for 18 and 10 days, respectively, before being transferred to SHPHCC; his case was the most serious of the 4, and the disease progressed rapidly after he was transferred to SHPHCC. 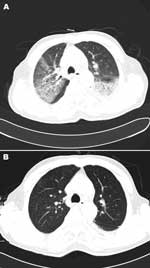 Case-patient 1 was receiving noninvasive ventilator-assisted breathing when he arrived at SHPHCC. His oxygen saturation remained at ≈95%, and he was given continuous intravenous dopamine infusion. He had acute respiratory failure, coronary heart disease (stage 2 heart failure), and renal function insufficiency at admission. On April 11, 11 days after the onset of the symptoms and 2 hours after endotracheal intubation and mechanical ventilation began, he died from respiratory failure.

Case-patient 2 arrived at SHPHCC with a nasal cannula inserted to maintain oxygen saturation at 95%. His general condition improved steadily after commencing antiviral drug treatment, and he was discharged 18 days after illness onset.

Case-patient 3 arrived at SHPHCC with a nasal cannula inserted to maintain oxygen saturation at 95%. He had a history of hypertension and gout. He was treated with oseltamivir, antimicrobial drugs, and steroids to suppress lung inflammation. His condition improved substantially, and he was discharged 21 days after illness onset.

Case-patient 4 arrived at SHPHCC in critical condition: oxygen saturation was 88%, and he had shortness of breath (30–35 breaths/min). He was immediately given noninvasive mechanical ventilation. One day after admission, his condition deteriorated; multiple organ dysfunctions in lung and kidney developed. His condition continued to deteriorate despite active treatment with oseltamivir and antimicrobial drugs. Severe hypoxemia developed. Two days after admission, invasive mechanical ventilation and then extracorporeal membrane oxygenation were implemented. The patient was still in critical condition on April 21, 2013.

Clinical manifestations of disease in the 4 case-patients were consistent with those reported for other persons infected with influenza A(H7N9) virus (3). Case-patients 1 and 4 had a more severe disease course than case-patients 2 and 3. All patients sought medical care for unresolved fever, cough, expectoration of sputum, and shortness of breath. The severe cases progressed rapidly: body temperature was mostly sustained >39°C, and breathing was difficult and sometimes accompanied by hemoptysis. A rapid progression of acute respiratory distress syndrome occurred in case-patients 1 and 4, along with mediastinal emphysema, shock, disturbed consciousness, and acute kidney injury. No close contacts of the 4 patients have had signs or symptoms of infection.

The currently available drug treatment for influenza A(H7N9) virus infection is neuraminidase inhibitors (e.g., oseltamivir). Their early use may be recommended (4) but is not always achieved. Case-patient 4 only began neuraminidase inhibitors 16 days after the onset of symptoms, by which time he was in a severe condition. Case-patient 1 was treated with oseltamivir 6 days after the onset of symptoms and, despite treatment, died 6 days after admission to SHPHCC. Earlier, higher doses combined with continuous treatment might improve patient outcomes (5). On the basis of clinical judgment, we now use 150 mg of oseltamivir twice daily for severe cases, monitoring for toxicity.

Of the 4 patients reported here, only case-patient 1 died shortly after admission to SHPHCC. He is also the only patient who had close contact with chickens. However, it is not clear that this contact contributed to the rapid progression of disease in case-patient 1, especially given the fact that case-patient 4, who is still in critical condition, also had rapid progression of disease. The other patients did not raise birds at home, but they visited live poultry markets.

Prompt and early communication of the clinical features of persons infected with avian influenza A(H7N9) virus is crucial to the development of effective treatment strategies (6). Research to understand the transmission pattern and effective control of this virus is urgently needed (7–9).

Dr Lu is director of the Respiratory Department, SHPHCC, and is in charge of treatment and management of influenza A(H7N9) virus–infected patients. His primary interest is infectious diseases, especially tuberculosis in children.

We thank Thomas Marcinko for his invaluable help editing the manuscript.