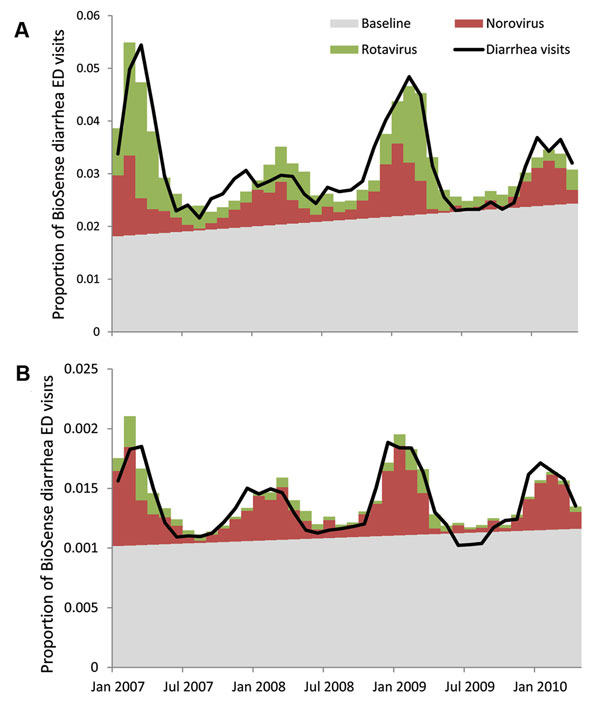 Figure 2. . . Model attribution of the proportion of BioSense emergency department (ED) visits mapped by chief complaint to diarrhea subsyndrome compared with estimates of norovirus and rotavirus infections, United States, January 2007–April 2010. A) Patients 0–4 years of age; B) patients of all ages. Predicted norovirus largely accounted for the observed seasonal variations in the proportion of diarrhea visits in the all-ages group (17.5% of predicted total, January 2007–April 2010), with rotavirus making a smaller contribution (4.7%); norovirus (13.6%, August 2007–April 2010) and predicted rotavirus (13.6%) equally accounted for the seasonality in the 0–4-year age group. All other etiologies captured by the background and secular increase (baseline) did not contribute to the observed winter seasonality.

Page created: July 18, 2013
Page updated: July 18, 2013
Page reviewed: July 18, 2013
The conclusions, findings, and opinions expressed by authors contributing to this journal do not necessarily reflect the official position of the U.S. Department of Health and Human Services, the Public Health Service, the Centers for Disease Control and Prevention, or the authors' affiliated institutions. Use of trade names is for identification only and does not imply endorsement by any of the groups named above.