Epidemiology of Influenza A Virus among Black-headed Gulls, the Netherlands, 2006–2010

We sampled 7,511 black-headed gulls for influenza virus in the Netherlands during 2006–2010 and found that subtypes H13 and H16 caused annual epidemics in fledglings on colony sites. Our findings validate targeted surveillance of wild waterbirds and clarify underlying factors for influenza virus emergence in other species.

Wild waterbirds of the orders Anseriformes (ducks, geese, swans) and Charadriiformes (gulls, terns, shore birds) are the ultimate source of influenza A viruses for domestic birds and mammals, including humans (1). Knowledge of the epidemiology of these avian influenza viruses (AIVs) among wild waterbirds is necessary to improve surveillance and better clarify underlying factors in host-switching of AIV. Epidemiology of AIV in wild waterbirds has been studied mainly among ducks (order Anseriformes) (2) but is poorly known among gulls, despite their abundance and close association with humans (3). Therefore, we studied the epidemiology of AIV in one of the most common gull species in western Europe, the black-headed gull (Chroicocephalus ridibundus).

Black-headed gulls (n = 7,511) were sampled year-round at multiple locations in the Netherlands during 2006–2010. Birds were captured by hand, leg-noose, or clap net; then, we determined their sex and age (first-year [FY] bird: nestling, fledgling; after first-year [AFY] bird) and weighed them. During the breeding season (April–July), 2,839 FY and 524 AFY birds were sampled at colony breeding sites. Three breeding sites were monitored annually during 2008–2010: Griend, De Kreupel, and Veluwemeer. At Griend, BHGU breeding success was also measured and used to compare breeding chronology to timing of infection (Technical Appendix). Outside the breeding season, 1,200 FY and 2,948 AFY birds were sampled in meadows and cities. Cloacal and oropharyngeal swab samples were collected from each bird and tested for AIV by using matrix (M)–specific reverse transcription PCR (RT-PCR) and, if positive, for H5 and H7 subtypes by using hemagglutinin (HA)–specific RT-PCR. Virus culture was attempted on all M RT-PCR–positive samples by egg inoculation. Virus isolates were classified to HA subtype by hemagglutination inhibition assay and to neuraminidase (NA) subtype by using RT-PCR (4,5). Blood samples were collected from an arbitrary subset of 134 FY and 214 AFY birds and tested for anti-AIV antibody by nucleoprotein (NP)–specific ELISA (6). Statistics were performed by using software RStudio version 0.95.265 (www.r-project.org). Additional analyses on AIV prevalence among male versus female birds, dead versus live birds, recaptured birds, and capture bias were performed (online Technical Appendix).

Figure 1. Avian influenza virus prevalence among 7,511 black-headed gulls, the Netherlands, 2006–2010. Cloacal and oropharyngeal samples were collected once from each gull for virus detection. Influenza virus subtypes detected are shown above... 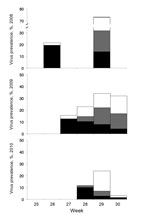 Our results showed that AIV epidemics in black-headed gulls occurred annually during June and July, with a peak monthly prevalence of 47% during 2008 (Figure 1, Table 1). These epidemics were detected in FY birds only and were limited to subtypes H13 and H16; subtype H13 and H16 viruses represented 100% of all virus isolates and 55% of RT-PCR positive birds. In contrast, no AIVs were detected in 524 AFY birds sampled during the breeding season. Annual epidemics were detected in 2 of 3 colonies sampled annually during 2008–2010 (Technical Appendix Table 1). More detailed investigation on Griend showed that, although H13 and H16 viruses were detected each year, H13 was the only (2008, 2009) or predominant (2010) subtype detected on the first day of virus detection of each breeding season (Figure 2, Table 2). In 2008 and 2009, H16 was detected the next sampling day, which was 1–2 weeks later. H16 was or became the predominant subtype during 2008–2010; H13 prevalence decreased during that period. The source of H13 and H16 viruses causing these epidemics is unknown. Possible sources are breeding or nonbreeding BHGU, other gull species at the colony sites, and freshwater ponds (if present) at the colony sites. Nonbreeding BHGU tend to wander among colony sites. BHGU that breed north of the Netherlands arrive in the Netherlands from July 1 onwards (F. Majoor, unpub. data).

Results from Griend also showed that these epidemics occurred after onset of fledging. The first detection of AIV on Griend (during the last week of June 2008, the first week July 2009, and mid-July 2010) occurred 1–3 weeks after onset of fledging. Also, of 871 FY birds, AIV was detected only in FY birds with an average length of <200 mm, above which they are considered to be fledged (7). Possible explanations for timing of the epidemic could be increased mobility after fledging and, therefore, increased contact rate; access to water, facilitating more efficient virus transmission; and increased susceptibility of fledglings as a result of immature body condition and loss of maternal antibodies.

Body condition did not differ notably between virus-positive and virus-negative FY birds sampled on the same day (p>0.05, Mann-Whitney Wilcoxon test), except for during the third week of July during 2009 (p = 0.046) and 2010 (p = 0.0004), when virus-positive birds had lower body condition. This suggests that, overall, H13 and H16 virus infections are nonpathogenic for BHGU. Previous studies found no clinical signs (8) or histological lesions (9) in gulls naturally infected with H13 or H16 virus. No notable differences in virus prevalence were found related to gender, no consistent differences in virus prevalence were found related to capture method, and no AIVs in dead BHGU were detected outside epidemics (Technical Appendix).

We describe annual AIV epidemics in BHGU colonies. These epidemics were caused by AIV subtypes H13 and H16 and occurred in FY birds during the second half of the breeding season, with prevalence rates of up to 72% per week. On most sampling days, infected and noninfected FY birds had similar body conditions, suggesting H13 and H16 viruses are nonpathogenic for BHGU. These findings broaden our view on AIV dynamics in populations of gull species often closely associated with humans and facilitate more targeted sampling of colonial nesting waterbirds. Further research is needed to show if the same AIV dynamics apply to other gull species and other geographic areas and to clarify the epidemiology of AIV in wild birds and factors that influence emergence of influenza in domestic animals and humans.

Ms Verhagen is a graduate student at the Department of Viroscience of the Erasmus Medical Center in Rotterdam, the Netherlands. Her research interests include epidemiology and evolution of viral diseases in human and animal populations.

Epidemiology of Influenza A Virus among Black-headed Gulls, the Netherlands, 2006–2010