Avian bornavirus (ABV) has been identified as the cause of proventricular dilatation disease in birds, but the virus is also found in healthy birds. Most studies of ABV have focused on captive birds. We investigated 86 free-ranging psittacine birds in Brazil and found evidence for natural, long-term ABV infection.

Proventricular dilatation disease (PDD) is a fatal disease in birds worldwide, mainly affecting psittacines but also other species (1). This disease is characterized by gastrointestinal dysfunction with or without neurologic symptoms. In 2008, two independent research groups identified a novel virus in PDD-affected birds and named it avian bornavirus (ABV) (2,3); the researchers suggested ABV as the most likely cause of PDD. Subsequent studies have confirmed the association between ABV infection and PDD (2–7). However, ABV has also been found in healthy birds, indicating that additional factors may be required to cause clinical disease (4,7).

The 49 birds from CRAS do Parque ecológico do Tietê–SP were euthanized for humanitarian reasons because of severe lesions that impeded reintroduction into the wild. The 37 birds from CRAS Campo Grande–MS were in good condition and were submitted for sampling purposes; however, 1 bird died suddenly. These birds had no signs of digestive or neurologic diseases and were anesthetized with inhalational isoflurane before organ sampling or euthanasia.

We detected ABV RNA in tissue samples or cloacal swab specimens from 26 (30.2%) sampled psittacine birds; all were identified as type ABV-4. Of these birds, 12 originated from CRAS Tietê and 14 from CRAS Campo Grande. Most (84.6%) of the infected birds were adults, but nestlings (15.4%) were also affected. Antibodies against ABV were found in 19 psittacine birds, but for 15 of them, titers were low (1:10–1:20) and thus the birds were classified as probably, but not clearly, positive. The remaining 4 birds had titers >1:40 and were classified as ABV-antibody positive. 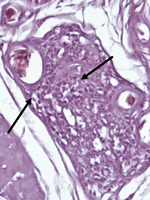 Figure. Section of the crop of a white-eyed conure (Aratinga leucophthalmus; bird no. 70 [Table 1]) from Brazil that was infected with avian bornavirus genotype 4. Stain shows mononuclear...

By evaluating hematoxylin and eosin–stained sections from the crop, brain, and proventriculus of 50 birds and crop biopsy specimens from 30 birds, we determined that 11 (14%) birds had mononuclear infiltrates in the ganglia of the proventriculus or crop, which were diagnosed as suspected PDD (Figure). Seven of these birds also had ABV RNA in tissue samples or cloacal swab specimens or antibodies against ABV in blood samples.

Brazil is known for its variety in free-ranging psittacine birds and is the origin country of endangered species such as the critically endangered Spix’s macaw (Cyanopsitta spixii) and the Lear’s macaw (Anodorhychus leari). The spread of infectious pathogens such as ABV is a constant threat for the survival of these species in the wild and to species conservation projects. Hence, identification of disease agents and prevention of infection is critical.

In this surveillance study, we investigated 86 birds of the family Psittacidae originating from the wild from 2 regions of Brazil and found that 40 had signs of ABV infection, PDD, or both (Tables 1, 2). Four birds of 2 species (1 B. tirica, bird no. 12; and 3 A. leucophthalmus, birds no. 69, 70, and 71) had ABV antibodies in blood and ABV RNA in tissue samples (n = 2), cloacal swab specimens (n = 1), or both (n = 1). Other authors have reported ABV RNA and antibodies against ABV in birds without signs of disease (4,5,12,14), which suggests a persistent (5,14) or a subclinical (4,5,9) course of infection for an indefinite period (9,14). In our study, 50% of the ABV RNA–positive birds did not show antibodies against ABV by IIFA. Similar findings have also been observed by other authors (4,5,14), which suggests the infection might be at an early stage (5,12,13) or that the virus may escape the immune system (5,15). Because ABV is unstable in the environment or in fecal material, the virus does not seem to be highly contagious (14). Sampling for this study was conducted only once, and because ABV shedding in urofeces is intermittent (9), it is possible that some of the tested birds were undetected carriers of ABV and that the prevalence of ABV infection is even wider than supposed.

ABV RNA in cloacal swab specimens reinforces the suggestion of a gastrointestinal/urogenital location for the virus in the free-ranging psittacine bird population in these areas of Brazil. Unless infection during captivity in the rehabilitation centers can be proven, infection in the wild must be considered. We found ABV RNA by rRT-PCR in a white-eyed conure nestling (Aratinga leucophthalmus; bird no. 76) that was introduced into the CRAS Mato Grosso do Sul rehabilitation center 1 day before sampling. Likewise, 6 birds of 3 species (B. tirica, birds no. 5, 8, and 12; A. leucophthalmus, birds no. 50 and 55; and A. ararauna, bird no. 86) that arrived in the centers 2 months to 1 week before sampling showed either antibodies against ABV or ABV RNA (Table 1).

In summary, our findings indicate the apparent existence of ABV infection in the free-ranging psittacine bird population in 2 areas of Brazil. The presence of antibodies in the birds we tested may indicate long-term infection in which ABV viral shedding and transmission are not unusual. Our findings provide evidence of natural infection with ABV in free-ranging psittacine birds, the development of histopathologic lesions typical of PDD, and the occurrence of this disease in the natural habitat of these birds in South America.

Mrs Encinas-Nagel is a veterinarian in a small animal practice and a doctoral student at the Institute for Poultry Diseases of the Freie Universitaet Berlin. During this research study, she worked in cooperation with the biology institute from the Universidade Estadual de Campinas, São Paulo, Brazil, and the Clinic for Birds, Reptiles, Amphibians and Fish from the Justus-Liebig Universitaet, Giessen, Germany.

We thank the teams from CRAS Tiete São Paulo and CRAS Campo Grande Mato Grosso do Sul who enabled this research study. We also are grateful to Marcela Saragiotto for support in field work.

The research was supported by the German Academic Exchange Service.