West Nile virus (WNV) is becoming more widespread and markedly effecting public health. We sequenced the complete polyprotein gene of a divergent WNV strain newly detected in a pool of Uranotaenia unguiculata mosquitoes in Austria. Phylogenetic analyses suggest that the new strain constitutes a ninth WNV lineage or a sublineage of WNV lineage 4.

West Nile virus (WNV), the most widespread flavivirus, is distributed throughout Africa, Asia, Europe, and Australia, and since 1999, WNV has also been present in the Americas (1). Within the last 2 decades, WNV infection has caused an increasing number of cases of neuroinvasive disease in humans and become a substantial public health problem (1).

Up to 8 lineages of WNV, based on genetic differences, have been proposed (1,2) (Table 1). Lineage 1 is widely distributed and further divided into lineage 1a, which includes the American strains; lineage 1b, which is also referred to as Kunjin virus and mainly described in Australia; and lineage 1c, which is also referred to as lineage 5 and comprises isolates from India. Lineage 2 has been detected in Africa and several parts of Europe, lineage 3 (Rabensburg virus) has been isolated only in the Czech Republic, and lineage 4 has been reported from Russia (3). A putative sixth lineage, based on a small genome fragment, has been described from Spain (4), and putative lineages 7 (Koutango virus) and 8 have been reported from Senegal (2).

WNV is maintained in an enzootic cycle between mosquitoes and wild birds (1). In 2013, ≈100 Uranotaenia unguiculata Edwards, 1913, mosquitoes were trapped during mosquito-monitoring projects at Lake Neusiedl-Seewinkel National Park in Austria and near Sedlec in the Czech Republic. In Russia, Ur. unguiculata mosquitoes have been described as hosting lineage 4 WNV strains (A. Platonov, unpub. data) (GenBank accession nos. FJ154906–49 and FJ159129–31). To determine whether Ur. unguiculata mosquitoes in Austria and the Czech Republic also host WNV, we investigated the mosquitoes collected in 2013 for the presence of WNV, focusing on lineage 4 viruses.

The mosquito pools were homogenized in RNase-free water, and RNA was extracted by using the QIAamp Viral RNA Mini Kit (QIAGEN, Valencia, CA, USA). The samples were screened for the presence of flavivirus nucleic acid by reverse transcription PCR, using universal flavivirus primers MAMD (6) and CFD2 (6,7) for amplification of a partial nonstructural protein (NS) 5 sequence. Results were negative for the samples from Czech Republic. One pooled sample from Austria was positive; the pool contained 9 mosquitoes that had been captured in late August in Illmitz, a village east of Lake Neusiedl (47.769997°N, 16.752887°E). We obtained the complete polyprotein coding sequence and partial 5′ and 3′ noncoding ends of this novel WNV strain (GenBank accession no. KJ831223), which was designated West Nile virus-Uranotaenia unguiculata-Lake Neusiedl-Austria-2013 (WNV-Uu-LN-AT-2013). Primer sequences and amplification protocols are available upon request.

The complete polyprotein gene sequence of WNV-Uu-LN-AT-2013 shares a maximum identity of ≈83% with lineage 4 WNV strains isolated from Ur. unguiculata mosquitoes and Dermacentor marginatus ticks in Russia (3). At the amino acid level, the entire polyproteins of WNV-Uu-LN-AT-2013 and the lineage 4 strains from Russia share ≈96% identity (Table 2). Compared with the Russian lineage 4 strains, a 1,813-nt fragment of the NS5-coding sequence for the putative lineage 6 WNV, isolated from Culex pipiens mosquitoes in Spain (4), shares slightly higher nucleotide and amino acid identities with WNV-Uu-LN-AT-2013 (Table 2). 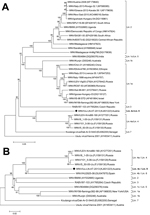 Phylogenetic neighbor-joining trees were generated with MEGA5 software, using ClustalW alignments, 1,000 replicates for bootstrap testing, and evolutionary distances computation with the p-distance model (8). One phylogenetic tree was constructed on the basis of the complete polyprotein-encoding nucleotide sequences of 32 WNV strains representing all previously described lineages for which complete polyprotein-encoding sequences are available. This tree also showed a close relationship between WNV-Uu-LN-AT-2013 and the lineage 4 WNV strains from Russia; however, the newly identified strain forms a distinct branch (Figure, panel A). A second phylogenetic analysis that included the proposed lineage 6 virus from Spain and that was based on 1,813-nt fragments of NS5 showed a close grouping of WNV-Uu-LN-AT-2013 virus from Austria, the virus from Spain, and the lineage 4 viruses from Russia; similarity was slightly higher between the viruses from Austria and Spain (Figure, panel B).

WNV-Uu-LN-AT-2013 encodes a polyprotein of 3,432 aa. The envelope protein carries 1 putative N-linked glycosylation site at asparagine residue N-154, which has been associated with increased WNV pathogenicity and neuroinvasiveness (9). The 3 highly conserved N-linked glycosylation sites at NS1 positions N-130, N-175, and N-207 in WNV strains were also calculated for WNV-Uu-LN-AT-2013 by using NetNGlyc 1.0 software (http://www.cbs.dtu.dk/services/NetNGlyc/). Glycosylation of NS1 at these 3 positions has been implicated in neuroinvasiveness (10), as has proline at NS1 aa position 250 (11), which is also present in WNV-Uu-LN-AT-2013. The NS2A-encoding nucleotide region contains a foo motif, which can mediate production of NS1′, a variant of NS1 that plays a role in neuroinvasiveness (12). A fifo motif, which has been described for the nonpathogenic mosquito-specific flaviviruses (13), could not be determined for WNV-Uu-LN-AT-2013.

WNV lineages 1–4 and putative lineage 6 have been detected in Europe, but only WNV lineage 1a has spread across the American continents. Circulation of such a genetically diverse group of WNV strains in Europe may partly explain the epidemiologic differences observed between WNV disease in Europe and the Americas. In Europe, the presence of less pathogenic WNV strains may inhibit the spread of more pathogenic strains.

We propose that the WNV-Uu-LN-AT-2013 strain from Austria either constitutes a new lineage (lineage 9) or can be grouped into lineage 4 as sublineage 4c, with the strains from Russia and Spain as sublineages 4a and 4b, respectively. However, the short sequence available for the strain from Spain does not allow a clear-cut conclusion to be drawn with regard to lineage 4. We suggest that future designation of new WNV lineages should be restricted to viruses for which at least the complete polyprotein gene sequences have been determined. In addition, rules for defining virus lineages should be established by the International Committee on Taxonomy of Viruses.

Dr Pachler is a postdoctoral researcher at the Institute of Virology, University of Veterinary Medicine, Vienna, Austria. Her research interests include the molecular biology of emerging and vectorborne viruses.

We thank Oldřich Šebesta for collecting and identifying mosquitoes in the Czech Republic and Jolanta Kolodziejek for her support.

This study was partially funded by support from the European Commission (grants HEALTH.2010.2.3.3-3 Project 261391 EuroWestNile [http://www.eurowestnile.org] and FP7-261504 EDENext [http://www.edenext.eu], and is catalogued by the EDENext Steering Committee as EDENext228).