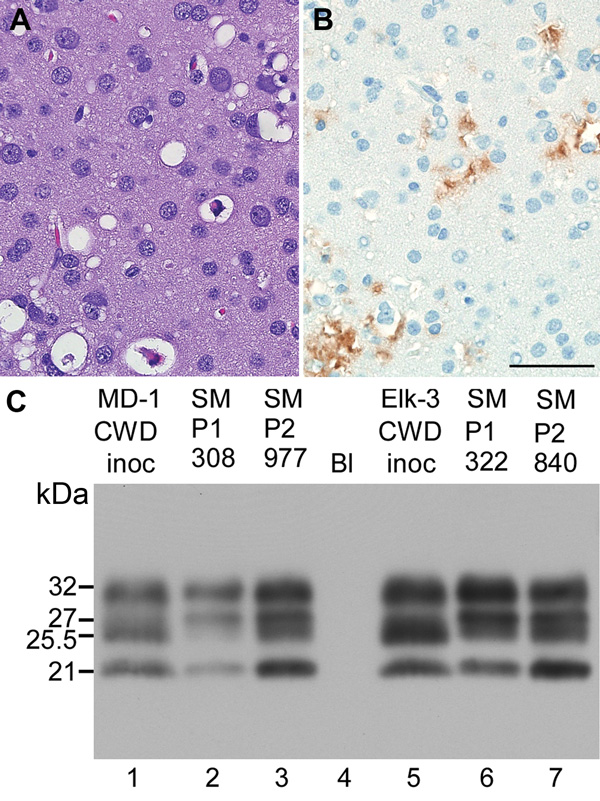 Figure 2. Neuropathologic features and immunoblot results of second-passage squirrel monkeys that had chronic wasting disease (CWD)Scale bar represents 50 µM and is applicable to panels A and BPanels A and B show neuropathologic changes in the occipital lobe of SMP2-CWD monkey 977, which was euthanized at 24 months postinoculationA) Hematoxylin and eosin staining show prominent spongiform changesB) Immunohistochemical staining for disease-associated prion protein (PrPres) (brown) with anti-PrP antibody D13C) Results of Western blot for PrPres in brain tissue of cervids and its respective first and second passage in squirrel monkeysMD-1 was used to infect SM308, and SM308 was used to infect SM977Lanes 1, 2, 5, and 6, 0.6 mg brain equivalentsLanes 3 and 7, 0.36 mg brain equivalents to give similar signal intensities to the other samplesLane 4, blank (Bl)Apparent molecular weights (in kDa) are provided on the left side of panel CImmunoblot was probed with anti-PrP antibody L42When comparing the 2 central bands, cervid CWD had a more intense band at 25.5 kDa; SM-CWD (nos308 and 322) and SM2-CWD (nos977 and 840) were more intense at 27 kDa.