Chronic wasting disease is a prion disease of cervids. Assessment of its zoonotic potential is critical. To evaluate primate susceptibility, we tested monkeys from 2 genera. We found that 100% of intracerebrally inoculated and 92% of orally inoculated squirrel monkeys were susceptible, but cynomolgus macaques were not, suggesting possible low risk for humans.

Chronic wasting disease (CWD) is a transmissible spongiform encephalopathy that can infect mammals in the family Cervidae, which includes deer, elk, and moose, among other species. Initially detected in a captive deer in 1967, the disease is now widespread in the United States, Canada, and South Korea (1). Because cervids are commonly consumed as food by humans and other mammals, the cross-species potential of the causal pathogen must be determined. CWD prions injected intracerebrally have infected agricultural animals and scavengers (2); however, transgenic mice that expressed human prion protein (PrP) were not susceptible (3–6) through this route. We previously analyzed the susceptibility of 2 genera of nonhuman primates to CWD agents by intracerebral and oral routes (7). The results showed a high attack rate in squirrel monkeys (Saimiri sciureus) inoculated intracerebrally but a low attack rate and long incubation periods by those exposed orally. In contrast, no cynomolgus macaques (Macaca fascicularis) showed clinical signs of transmissible spongiform encephalopathy (TSE) when exposed by either route. The long incubation periods observed in squirrel monkeys prompted us to observe the remaining monkeys for >4 additional years. Here we provide an update and report results of new experiments showing that squirrel monkey–adapted CWD (SM-CWD) has an accelerated incubation period on second passage.

Squirrel monkeys were inoculated intracerebrally or orally with CWD inocula (7). We initially reported that 11/13 intracerebrally infected monkeys were euthanized at 41 months postinoculation (mpi) on average, and disease developed in 2/12 orally infected squirrel monkeys on average of 69 mpi (7). Disease developed in the 2 remaining intracerebrally infected squirrel monkeys at 61 and 75 mpi, respectively, changing the intracerebral attack rate to 100% (Figure 1, Table 1). Of the 10 remaining orally inoculated squirrel monkeys, disease developed in 9, bringing the overall oral attack rate to 92% and the average incubation period to 68 mpi (Figure 1, Table 1). Clinical signs were subtle; the most prominent finding was gradual weight loss (Table 1). A final diagnosis of CWD agent infection was made by using immunoblotting and immunohistochemical testing to determine accumulation of abnormal, disease-associated prion protein (PrPres) in brain tissue (Technical Appendix).

Of the squirrel monkeys under study, 3 PRNP genotypes were represented (7). In the group of orally infected squirrel monkeys, 3 had a unique heterozygous genotype that encoded either 4 or 5 octapeptide repeats. Two of these monkeys were the last orally infected monkeys to be euthanized because of clinical disease (80 and 107 mpi), and the third heterozygote was clinically normal at 108 mpi. Heterozygosity within the PRNP gene has been shown to delay or prevent prion disease (8) and may play a role in this study. 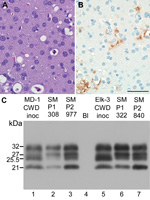 Figure 2. Neuropathologic features and immunoblot results of second-passage squirrel monkeys that had chronic wasting disease (CWD)Scale bar represents 50 µM and is applicable to panels A and BPanels A and B show...

Two SM-CWD brain samples were inoculated into squirrel monkeys and cynomolgus macaques to verify that SM-CWD was infectious, test for further adaptation, and to see if SM-CWD was infectious to a broader range of nonhuman primates. Two squirrel monkeys inoculated intracerebrally with SM-CWD brain homogenates (SMP2-CWD) were euthanized at 23–24 mpi (Table 1). These incubation periods decreased by >11 months compared with that of the donor squirrel monkey. Neurologic signs in the 2 SMP2-CWD were more pronounced than observed during the first passage; however, weight loss was reduced. Neuropathologic examination and Western blot for PrPres confirmed TSE in both squirrel monkeys. In contrast to SM-CWD infections, the SMP2-CWD-infected brains had spongiform lesions and PrPres deposition in the occipital lobe (Figure 2, panels A, B). Biochemical comparison of glycoform patterns among CWD, SM-CWD, and SMP2-CWD were made by using 3 different anti-PrP antibodies (L42, 6H4, and 3F4) (Technical Appendix). In all cases, SM2-CWD had a greater proportion of unglycosylated PrPres and a lower proportion of double glycosylated PrPres than did SM-CWD (Figure 2, panel C). The decreased time of manifestation of disease, differences in glycoform patterns, and distribution of PrPres in brain tissue suggested that the CWD agent was still adapting within the squirrel monkey. However, similar to CWD, SM-CWD had not caused prion disease in cynomolgus macaques by 72 mpi (Table 2).

Our studies have shown that squirrel monkeys, but not cynomolgus macaques, were susceptible to CWD. Although these nonhuman primates are not exact models of human susceptibility, they support the data from transgenic mouse studies (3–6), in vitro experiments (13), and epidemiologic evidence (14,15) that suggest humans are at a low risk of contracting CWD. Nevertheless, it remains sensible to minimize exposure to tissues potentially contaminated with the CWD agent.

Dr Race is a staff scientist in the Laboratory of Persistent Viral Diseases, National Institute of Allergy and Infectious Diseases. His research interests are infectious diseases of humans and animals.

This research was supported by the Intramural Research Program of the NIH, NIAID.