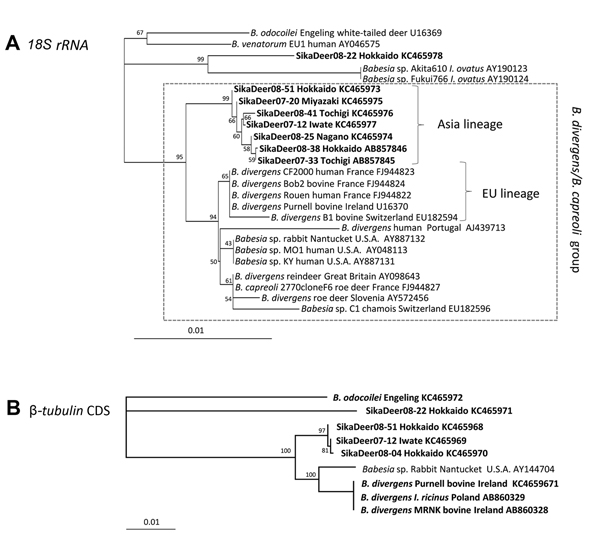 Figure. Neighbor-joining phylogenetic trees generated from Babesia sequences from GenBank and from our study in Japan, November 2007–February 2008 and November 2008–February 2009Bootstrap support (1,000 repetitions) is indicated at the nodesThe trees are based on the partial (1,041 bp) Babesia 18S rRNA gene (A) and the partial (900 bp) β-tubulin gene (B)Sequences determined in this study are in boldfaceScale bar indicates the inferred number of substitutions per siteLineages are indicatedCDS, coding DNA sequence.

Page created: July 21, 2014
Page updated: July 21, 2014
Page reviewed: July 21, 2014
The conclusions, findings, and opinions expressed by authors contributing to this journal do not necessarily reflect the official position of the U.S. Department of Health and Human Services, the Public Health Service, the Centers for Disease Control and Prevention, or the authors' affiliated institutions. Use of trade names is for identification only and does not imply endorsement by any of the groups named above.