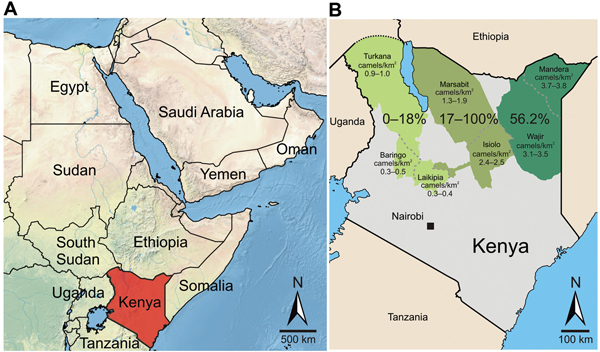 Figure. Greater Horn of Africa and KenyaA) Arabian Peninsula and neighboring countries in the Greater Horn of AfricaB) Detailed map of Kenya showing sampling sites in 7 counties (Turkana, Baringo, Laikipia, Marsabit, Isiolo, Mandera, and Wajir) for Middle East respiratory syndrome coronavirus (MERS-CoV)Counties were assigned to 3 regions named after the former administrative provinces of Rift Valley, Eastern, and Northeastern (left to right)The 3 sampling regions are indicated in shades of green and other counties are indicated in grayPercentages of camels positive for antibodies against MERS-CoV are shown with the density of camels (individuals/km2) for the analyzed regions during 2 periods (1991–2000 and 2000–2013)Serosurveys were performed during 1992–2013Camel population numbers were determined for 1991–2000 and 2000–2013Maps were created by using data from http://www.naturalearthdata.com.

Page created: May 06, 2014
Page updated: May 06, 2014
Page reviewed: May 06, 2014
The conclusions, findings, and opinions expressed by authors contributing to this journal do not necessarily reflect the official position of the U.S. Department of Health and Human Services, the Public Health Service, the Centers for Disease Control and Prevention, or the authors' affiliated institutions. Use of trade names is for identification only and does not imply endorsement by any of the groups named above.